In his remarks, Gary gave the audience some advice on investing for retirement. It might best be summarized as start early and put it in index funds with low management fees. All SU faculty and staff will be happy to know we have those options in our SU retirement plan! :} Gary also brought up the $15/hour minimum wage law in Seattle. He noted that he worked his way through SU working at Oberto Sausage and was paid $1.25/hour. The equivalent of today's $15 back then is $2.25, double the pay rate. He suggested that at the higher wage Art Oberto would not have been able to afford to hire Gary Brinson, and wondered where would Gary Brinson be today if he had not had the job at Oberto's. His point was to illustrate the unintended consequences of the $15/hour wage law, namely a decline in employment opportunities for low skill new entrants into the job market.

Some in the audience did not appreciate that perspective, but others appreciated Gary having the courage to raise the issue. It's clear the unintended consequences of the new law have not received much consideration in the rush to get legislation approved before a ballot initiative is organized. For example, consider the impact of the legislation on the SU campus and our use of student workers. Most students working on campus make much less than $15/hour. When the law goes into effect, it is unlikely the university will raise its student worker budget. Instead, we will have the same funds to pay at the higher hourly rate, meaning we will have fewer hours for students to work on campus. Total student income may not change, but there will be fewer students working, and it will certainly be harder to get work done! :{

The university is endeavoring to shorten both graduation ceremonies and those results are starting to pay off. I think you will see even more progress next year in getting the undergraduate ceremony to move along.

On a personal note, my son Greg graduated this year with undergraduate degrees in business and French, meaning he was able to walk across the stage twice, and I was able to present him with his business diploma. (Actually, it's not the diploma, just the cover, because we do not give out diploma's at graduation. We mail them later!) It was a pleasant surprise that he was able to participate in the ceremony. You see, he will spend the summer fishing for salmon in Alaska and the boat was supposed to head North on June 9th, but a series of repairs is keeping them here until June 17th, so he was able to participate at the last minute. That was a good Father's Day present for me!

The dean and son, Greg, on stage at graduation (photo courtesy of Jerry Huffman): 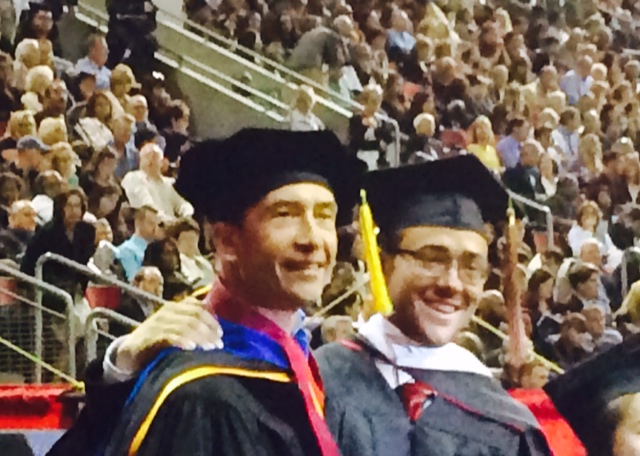