Genevieve Gertrude Albers, a trustee emerita of Seattle University and longtime friend to the Society of Jesus, died on December 25th, 2001. She was 93.

A generous donor to SU and familial namesake of the Albers School of Business and Economics, Albers was a consistent presence at university events and good friend to numerous campus Jesuits, faculty and staff. A mass of resurrection was held December 29 in her honor at St. Joseph Catholic Church and was presided over by SU President Stephen V. Sundborg, S.J. The Very Rev. Robert B. Grimm, S.J., provincial of the Oregon Province of Jesuits, offered the homily.

“Genevieve was larger than life, a legend of Capitol Hill and the Seattle Catholic community,” said Fr. Sundborg during her funeral mass. “She died—as fitting for her—on Christmas itself, in order to get in on one great party in heaven.”

Her Bequest to Seattle University

Born in 1908, Albers was the daughter of George Albers, founder of the Albers Brothers Milling Company (which later merged with Carnation Milk Products Company), and his wife Eva, a one-time SU Guild member. In 1965-66, Genevieve Albers attended SU, a time she would fondly remember with friends and strangers alike.

“The immediate impact of Genevieve’s passing is that many of us have lost a personal friend, but the university itself has lost not only a contributor but a powerful salesperson,” said SU Provost Dr. John Eshelman, a friend to Albers for 25 years. “We’d go out to dinner and she’d ask the server if he or she was planning to attend college—and if so, Genevieve didn’t miss an opportunity to urge them to try SU. She so fondly recalled her time here, and believed SU was doing something important and was educating for something she believed in.”

After the Albers School was named following a $3 million gift from the estate of her mother, Albers worked tirelessly in support of the school, sponsoring a business forum, establishing a Genevieve Albers Professorship and donating scholarship funds. “Genevieve was very much a supporter of the notion of free enterprise,” remembers Dr. Eshelman, who served as dean of the business school from 1976 to 1986. “She always appreciated the fact that the business school was named for her parents and looked for ways in which she could make small differences: allowing us to bring in big speakers, funding scholarships, and helping the school connect with the business community.”

“There’s no place to stop once you get going on who Genevieve was friends with, connected with, helped and gave to—including the Jesuits and all things Jesuit,” remembered Fr. Sundborg. 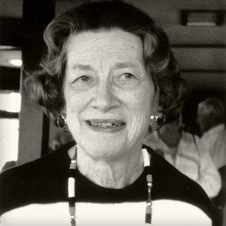