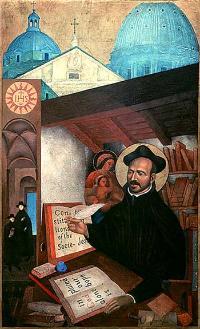 St. Ignatius of Loyola founded the Society of Jesus—the Jesuits, as they are commonly called—more than 450 years ago. Seattle University is one of 27 Jesuit universities in the United States and more than 100 around the world.

The Jesuits are well-known and respected as educators. A Jesuit education challenges students to think clearly, think for themselves, and test commonly accepted knowledge. Academic curiosity becomes a lifelong habit.

However, Jesuit education means more than acquiring knowledge. The Jesuits believe what you do with that knowledge is just as important. At Seattle University, students are encouraged to grow personally and spiritually, testing their values, developing a sense of responsibility for themselves and their community, and learning about making ethical choices in their lives. They learn to balance self-reliance with interdependence, knowledge with spirituality, and mind with heart.