A Life of Service By Tracy DeCroce 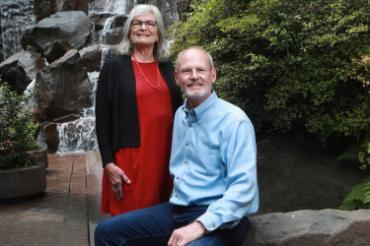 This year’s recipients of the St. Ignatius Medal are a couple whose conversion to Catholicism in the 1980s helped transform an innate call to service into an unwavering commitment to the poor. Steve and Tricia Trainer, ’02 MDiv, received the university’s highest honor at last week’s Gala, which recognizes individuals whose voluntarism, leadership, humility and service inspire and profoundly influence the progress of the university.

To the Trainers, “it’s all about the people.” Through their decades of service and philanthropy, they have formed close relationships that extend from indigenous people of the Pacific Northwest to people around the globe, along with many Jesuits and individuals within the university.

The Trainers began volunteering together as Stanford undergraduates during a 1968 trip to Hong Kong to teach English. Tricia also inherited a family tradition of service that she brought to the marriage. Steve built a successful career as vice president and principal at Wright Runstad & Company and then as co-founder of Seneca Group.
A relationship with the Chief Seattle Club began one day in 1992 when its then director Sister Julie Codd, CSJ, asked Tricia to bring soup to the social service center for urban Native American people. The building was dilapidated and cold, with holes in the wood floor. The Trainers raised money for a new building and, 26 years later, remain actively involved with the organization.

Global initiatives are important work for the Trainers. Steve met Joe Orlando, director of the Center for Jesuit Education, for coffee to talk about what Joe said was the need for greater global engagement at Seattle U. They discussed the importance of elevating global issues and experiencing places in the world where Americans don’t normally go. This conversation progressed to a written proposal to President Stephen Sundborg, S.J., for a Global Engagement Initiative that would develop opportunities for students, faculty and staff to participate in research, study and service experiences in Nicaragua. The proposal led to the Trainers funding the initiative in 2014.
Seattle U and its university and NGO partners on the ground in Guatemala are working to improve the lives of women and children.

INITIATIVE TO SERVE
In collaboration with a team consisting of a faculty member and students from the psychology program at the URL, they met with NGO partners to continue research efforts around the central question: “How do girls and women who experience domestic violence heal?” Lee and her team examined how information about best practices in helping women and girls heal is shared among organizations and governmental agencies who provide resources, including legal aid, to assist survivors of domestic violence. Bringing this information back to the U.S. to train counselors who work with women and girls from Central America is a primary goal. “This work [in Guatemala] has expanded my view so I can help students expand theirs and so counselors can provide better services to Central American women in the United States,” Lee says. For Lott, the value of this research is not only meaningful on a deeply personal level but also impactful on his professional life.

TRANSFORMING EXPERIENCE
In the afternoon, we do the site visits. I take them to the Cathedral, school for Indian children, to the indigenous village where they meet a spiritual leader… I take them to women’s co-ops, communities living off the train tracks. People are moved by the generosity and the capacity of these communities to give when they have so little.

Q: What personal meaning does the trip have for you?

A: I’m the daughter of Ecuadorian parents but I grew up in New York. And I went from New York to overseas as a young missioner. I’ve always lived in a very diverse, multicultural setting. When I moved to Seattle in 1990 it was my first time being in the dominant culture. Culturally, it was very difficult for me. I also am a devotee of Guadalupe. So for me it is a pilgrimage. It fulfills a spiritual need. Every time I walk into the Basilica, I feel like I’m coming home to the Mother.

Q: How does this pilgrimage align with the mission of Seattle U?

A: This immersion really lifts up our Jesuit values. This is like an incarnation kind of a lived experience of all the things we talk about on campus in terms of the dignity of the human person, the need for community, human rights and spirituality.

A LIFE OF SERVICE
The Nicaragua Initiative expanded to become the Central America Initiative. Under the leadership of Assistant Professor Serena Cosgrove, PhD, who credits the Trainers with helping Seattle U establish a “thriving set of relationships” in the region, there are outreach programs and research across Nicaragua, including the Caribbean Coast, and El Salvador, Guatemala, Honduras and beyond. Seattle U has also launched global initiatives in India and Africa.

It fits Steve’s vision that “every student should have firsthand experience outside the U.S. as part of their college experience.” Tricia, who received a master’s in divinity from the School of Theology and Ministry, worked as a spiritual director for 25 years for the Spiritual Exercises in Everyday Life program in Seattle. She also worked in family ministry at St. Joseph Church, the couple’s parish.

At Seattle U, Tricia co-founded the Indigenous Peoples Institute (IPI), which supports and celebrates Native students on campus. She and Steve both serve on IPI’s working group. With new projects in the works, the Trainers balance volunteer duties against daily shifts with four grandchildren, ages 18 months to 7 years old, who live close by. Pat Twohy, S.J., who has worked closely with the Trainers on several projects over the years, says the couple’s commitment is the reason many organizations exist. “With an eye for the environment and all peoples, Steve and Tricia have chosen to live simply, sharing all that they can with so many of us,” Twohy says. “Their generosity makes good things happen. Their combined wisdom and compassion truly lights up our world.”

A can see the Gala video honoring Steve and Tricia here.

Alumni say that career development is the most important benefit Seattle U can provide to them. The Seattle University Alumni Association and Office of Career Engagement have increased their investments in career development programs for alumni. We are excited to share new opportunities for alumni to grow their network, develop their careers and achieve their professional goals.

SU Advantage Networking Nights
SU Advantage is a networking event that brings alumni together around a relevant topic. Each event features a panel or keynote speaker and then opportunities for structured networking. 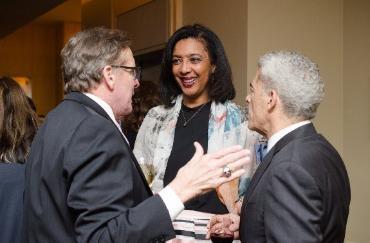 Build Your Digital Network
The Alumni Association knows the importance of building your network, which is why we offer access to the exclusive SU Alumni LinkedIn group with over 8,600 connections.