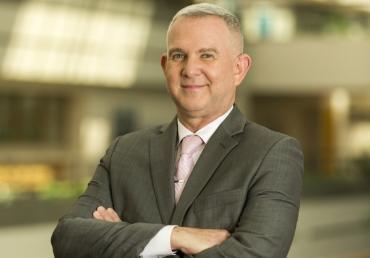 Martin is a tested and proven academic leader. As dean he brought visionary thinking and a spirit of innovation to his work in building, strengthening and supporting academic programs. Under his leadership, LMU’s School of Education has come into its own as a nationally ranked and highly regarded school and, since 2012, he has led Graduate Studies in strategically setting priorities and growing its program offerings.

With the student experience always at the heart of his work, Martin is committed to enhancing learning opportunities, advancing diversity and inclusion and ensuring that faculty are supported in their work and continued development. He has deep experience in ensuring faculty voices are heard, fostering interdisciplinary collaboration, harnessing the power of technology in ways that align with the university’s mission and managing complex budgets.

At LMU, Martin’s leadership has frequently been sought on a number of critical initiatives. His service has included chairing the committee that guided the university’s accreditation process as well as a committee on technology. A leader in the wider education community, he has served as chair and member of many boards, including his current service as a state commissioner to the California Commission on Teacher Credentialing.

Martin’s commitment to Jesuit higher education is integral to who he is as an educator, administrator and person. A product of Jesuit education, Martin has led a number of national Catholic and Jesuit organizations, including service as past president of the Association of Jesuit Colleges and Universities Education Deans Conference, past chair of the Association of Graduate Schools in Catholic Colleges and Universities and past chair of the American Educational Research Association Special Interest Group on Catholic Education. As he shared during his interview process, Martin understands keenly both the challenges now confronting all institutions of higher education and how Jesuit colleges and universities, in particular, are uniquely positioned to navigate and thrive in this climate.

At his core an educator and prolific scholar, Martin has authored three books and has contributed to many peer-reviewed publications on the topics of cultural diversity in Catholic schools, technology and learning, social justice in education and multicultural education. Additionally, he has received numerous awards and distinctions for his excellence as a leader and educator, including as a 2015 fellow of the Pahara-Aspen Education Fellowship.

Martin replaces Bob Dullea who provided outstanding direction for the university as interim provost for two years. Dullea was critical in ensuring we kept moving forward together in meeting our challenges and embracing opportunities.

Before his arrive, Martin shared these thoughts. “I am honored and humbled to become the next provost at Seattle University, an institution that has a strong reputation as a premier university in the Northwest and is poised to rise to greater heights. I look forward to working in partnership with the Seattle University students, faculty, staff and alumni who are making a difference throughout the greater Seattle region, the United States and the world.”

Celebrating Our Veterans During Homecoming 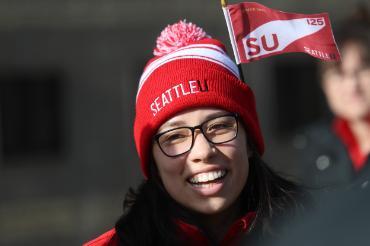 This fall as other schools are gearing up for Homecoming football and chilly tale gates, Seattle U is joining in the fun as Homecoming Weekend moves to November with basketball!

With Veterans Day taking place over Homecoming Weekend, celebrating our veterans is a key element of this year’s Homecoming.
We sat down with Tom Hove, Seattle University Veterans Navigator, to talk about how our veterans’ community is being celebrated as part of Homecoming.

The Robert Bennedsen Veteran’s Day 5k honors the service of a fallen alumni hero and celebrates the contributions of our military and veteran community. This family friendly event will have participants running around the perimeter of campus. All alumni and families are invited to participate. Anyone who makes a donation of $10 or more to the Emergency Support Fund, which supports our student veterans, will receive a limited edition challenge coin. Check the Homecoming website for details on registering for the 5k.

The Day of Service opportunities include manning the 5k and joining the veteran’s organization, The Mission Continues, to clean up the international district. You can sign up for Day of Service here.

Following the 5k and Day of Service, there will be a lunch and silent auction on campus with all proceeds going toward the Veterans Emergency Support fund. Veteran resource tables will also be on site throughout the day.

According to Tom, “This Veteran’s Day we are not just saying thank you for your service we are actually showing our gratitude, and that’s the type of support we give to our veterans. We are a military supportive school.”

On Sunday the Homecoming festivities continue with a Homecoming pre-game rally and men’s basketball game v. Bryant at the ShoWare Center. All veterans will receive special ticket pricing. Details are not yet finalized so check the Homecoming website for information as it becomes available.

Learn more about Homecoming here and join us to celebrate our veterans and show your Seattle U pride.