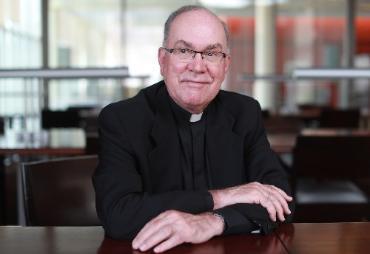 This time of the year always reminds me to reflect on what I am most grateful for and how blessed I am to serve the Seattle University community. I am reminded of the important role Seattle U plays in the lives of each of our students, alumni, staff, faculty and all the lives they touch. The gifts of the season are often referred to as joy, gratitude and hope, which are also gifts those committed to Seattle University enjoy throughout the year.

It brings me great joy when I see the active role Seattle University takes in our local and global community. Our students mentor and support central district schools as part of the Seattle University Youth Initiative and join our staff and faculty in Professionals Without Borders, traveling to Belize, Nicaragua and Zambia to help with health and infrastructure projects. Our alumni serve in leadership roles shaping local, national and global policies, leading industries and making a positive impact.

Much of what we are able to accomplish as a community and a university is due to our Jesuit roots and values. Over 125 years ago we got our start as Seattle College, led by Jesuits dedicated to educating the whole person and creating leaders for a just and humane world. I am grateful for the Jesuits who came before us to educate our students and the ones who will come after us to continue our mission and inspire a new generation of students to go forth and set the world on fire.

I have hope that Seattle University will continue to inspire students and alumni for generations to come.

And finally, I hope that you and your family have a Christmas season that is filled with a peace and comfort that allows you to reflect on all the ways you are blessed and for what you are most grateful. 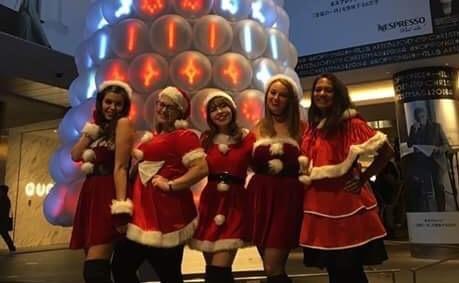 I’m Nina Cataldo, Seattle University College of Arts & Sciences ‘15. While I grew up mainly in Portland, Oregon, I used to spend my summer and winter holidays traveling back to Tokyo, Japan to be with my mom’s side of the family. In college, I did a semester exchange at Sophia University in Tokyo. This experience landed me a job as an advisor and writer for a Japanese publisher, and so, I returned to Tokyo upon graduation. Although I grew up very close to my Japanese roots and traditions, it has definitely taken some adjustment to move back to Japan and navigate it as a working adult. One interesting aspect has been watching the whole holiday season unfold in the city.

It’s fascinating how Japan can be such a tradition-driven country, and yet, be so keen on adopting festivities from the West. In recent years, for example, Halloween has become the biggest celebration (probably even bigger than in the U.S.) around Tokyo. While the majority of this country doesn’t identify with Catholicism or much of any religion at all (because Buddhism and Shintoism are considered part of the lifestyle instead of religions), Christmas has also become a modern long-standing celebration in Japan. However, the culture and traditions around it are much different than in the U.S.!

Christmas in the States is about decorating the Christmas tree, attending mass, spending time with family, and sharing a meal with loved ones at home. I often associate American Christmas with a time of reflection, love, and peace. In Japan, Christmas has turned into a special date-night, mostly associated with a romantic time for couples to celebrate together, exchange gifts, and to enjoy the Christmas light illuminations all around the cities. These illuminations are incredible and each year their setup and shows seem to get more extravagant. The whole city is lively leading up to the Christmas day and all night long.

Another odd and commercialized tradition in Japan for Christmas is eating KFC (Kentucky Fried Chicken). Japanese families and groups often need to put in Christmas day KFC orders weeks in advance or line up for long hours! My friends, whom are mostly expats, and I usually organize a get-together at one of our homes before many head home or away. We combine holiday traditions from our homes, like mulled wine and mince pies from Europe and a white elephant gift exchange. It’s nice to have friends who are like family when our own aren’t nearby, and the holidays are a great way to learn about various cultures while living in such a diverse city. All of this aside, Christmas isn’t recognized as a national holiday, so we work through the week or generally until the 28th of December.

Japan’s biggest and most important holiday is New Years; New Year’s holiday resembles more of the family time that Christmas or Thanksgiving has in the States. As a result, we usually have the whole first week of January off for the holiday. On New Year’s Eve, the whole extended family gathers at the (grand)parents’ home and shares a noodle cuisine called toshikoshi soba which translates to “overcoming the year soba (noodles)” with the noodles representing a long and prosperous year ahead. While some stay out for various countdown events, shows, and parties, many choose to stay at home and maybe pay a visit to the local temple or shrine for a prayer after midnight called hatsumode (first prayer). All the New Year’s Eve festivities or downtime is followed by a massive feast on New Year’s Day. The traditional osechi ryori “New Year’s cuisine” is prepared alongside other dishes that varies from household to household, and region to region. In my family, 16 of us gather at my grandma’s home and we order sushi, make katsu (pork and chicken cutlets), have a crab feast, and add a few other dishes like sashimi and kamaboko (fish cake). The feast is followed by lots of relaxation and food-induced naps, as well as massive sales, and more likely than not for me, a trip up to the snowy mountains for snowboarding.

The holidays are a hard time for many to be away from family, especially for people like me who are expats. But the holidays have been a great time for those of us who have become friends to share a piece of our home and traditions with each other. There’s nothing as touching and exciting as seeing new friends try a Thanksgiving feast for the first time, or seeing my Jewish friends eager for my reactions at my first Hanukkah festivities. This time of year is a reminder that we can create holiday cheer and adopt local traditions or make new holidays traditions no matter where we are in the world.