Each year, the ICTC hosts a scholar of Catholic thought and/or culture, availing of their expertise for reading groups, classes, on-campus events and, often, community outreach.

This academic year (2015-16) marks Fr. Howell's second with the ICTC as Distinguished Professor in Residence. We look forward to the theological expertise he will share with the Seattle University community and the Archdiocese of Seattle.

"The Reforms of Pope Francis: Can they last?"

March 7, 2015
American media frequently describes Pope Francis in terms of advertising. “The Pope is restoring the Catholic brand.” “The Pope is popular, but can he bring back Catholics to fill the pews?” All this hype misses the point. The Pope is calling for an authentic living of the Gospel—one of simplicity, compassion for others and, above all, mercy. After three years, the pope continues his urgent call for an authentic living of the Gospel. He is changing the culture. He is decentralizing the Church. He is building bridges. How’s he doing? What’s he up to now? Watch his lecture: Pope Francis: The Reform Pope—Can it Last?

"Who is Pope Francis? What is He Up to?"

October 7, 2015
Pope Francis is a charismatic and maybe even an enigmatic figure. Fr. Pat Howell, S.J. will offer insights into Pope Francis' vision for the church, particularly in light of his recent visits to the U.S. and Cuba.

"Pope Francis Throws the Doors Open for a New Church"

October 9, 2015
Followed by a no-host dinner at the Gordon Estate Wine Bar (5236 Outlet Drive in Pasco) for donors and Legacy Society members of SU. A leader with a heart that’s open to the world is how Father Pat Howell, S.J. describes Pope Francis. This Pope continues to surprise his own Catholic Church as well as the rest of the world. Currently he ranks as one of the most popular leaders in the world. People warm to his frank openness and his embrace of a simple lifestyle. He says that the Church should be “a field hospital” and needing to “go to where people are hurting.” Following fresh on the heels of Pope Francis’ first visit to the United States, Fr. Howell will offer insights into this Pope’s fresh leadership, which is providing new possibilities for ecumenical relationships, a greater appreciation of interfaith dialogue, and particular inspiration for young people, which was seen when 3 million gathered on Copacabana Beach in Brazil to hear his message.

All are welcome to attend the talk by Fr. Howell. Please feel free to invite others and add the event to community and parish calendars. The no-host dinner with Fr. Howell is limited to Legacy Society members and donors to Seattle University.

"What Does Pope Francis' Visit Mean for Us in the U.S.? As a Jesuit University?"

October 12, 2015
Seattle University Fathers “Pat and Pat” (Kelly, SJ and Howell, SJ) share their insights about the impact of Pope Francis on our nation and our university.

Both Pat Kelly, SJ, and Pat Howell, SJ had articles featured in America Magazine highlighting the important issues and questions raised by Pope Francis’ visit to the United States. Come hear them share their perspectives at this lunchtime conversation. This event is part of the "Moment for Mission" Lunch Series.

Fr. Howell has taught pastoral theology at Seattle University since 1985 and has been keenly involved with the formation of lay ecclesial ministers for the Catholic Church and ministers in 10 Protestant denominations. He has served as Dean of the School of Theology and Ministry, Vice President for Mission and most recently Rector of the Jesuit Community. His book, A Spiritguide through Times of Darkness, has been widely used, and he wrote a column for the Faith & Values section of The Seattle Times for nine years.
His most recent courses have been The Theology of Vatican II (graduate) and Catholic Imagination in Art and Film (undergraduate). During a year-long sabbatical, Fr. Howell went to work in the fall of 2013 for America magazine, a national Jesuit publication, and was commissioned along with four other experts to translate into English one of the first in-person interviews with Pope Frances and had been conducted in Italian. For the past two years, he has been giving multiple talks about Pope Francis, the reform of the Catholic Church, the pope’s message of mercy and compassion, his urgent call for care for the planet Earth and his Jesuit spirituality and leadership style.

Dr. Piehl is a scholar of American Catholicism who will spend his sabbatical year undertaking research on influential 20th century American Catholics. During his appointment, he will share with the Seattle University community his findings through a public lecture, lunches with faculty and the facilitation of a reading group.

As a Lutheran scholar studying American Catholicism, Dr. Piehl’s area of research makes him a valuable partner for the Seattle University community, especially as the institution moves toward strengthening the Catholic Studies Program, establishing the Institute for Catholic Thought and Culture and deepening the university’s engagement with ecumenism and interreligious dialogue.

Visiting Scholar Lecture: "Themes in American Catholic History (With an Eye toward Global Perspectives)," a reflection on of American Catholic intellectual and religious history, with a particular focus on how religious orders and Catholic social movements shaped American history and may shape other histories. Read more about Mel's events: 2013-14 Events. 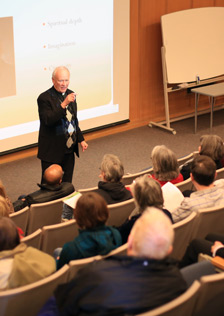