Our two-year theme for 2022-24 is “A Journey Towards Healing and Reconciliation.“ At this moment in history we are mindful that our world and our communities are impacted by wars, violence, hostility and anxiety. These community and global challenges affect us and lead us away from our call as Christians and people of goodwill to respond to violence and hatred in love as Scripture and Sacred texts teaches.

This year’s theme is further  inspired by General Congregation 36, Decree 1 – “Companions in a Mission of Reconciliation and Justice.” In the section “On mission with Christ the Reconciler,” we are called to share God’s work of reconciliation in our broken world. There is an urgency to the three dimensions of this ministry of reconciliation, namely, reconciliation with God, with one another, and with creation.

This reconciliation is always a work of justice, a justice discerned and enacted in local communities and contexts (paragraph 21). Additionally, educational apostolates and centers for communication and social research, such as ICTC, should help form people committed to reconciliation, confront obstacles to reconciliation, propose solutions, and to help in the transformation of our cultures and societies (paragraph 34). 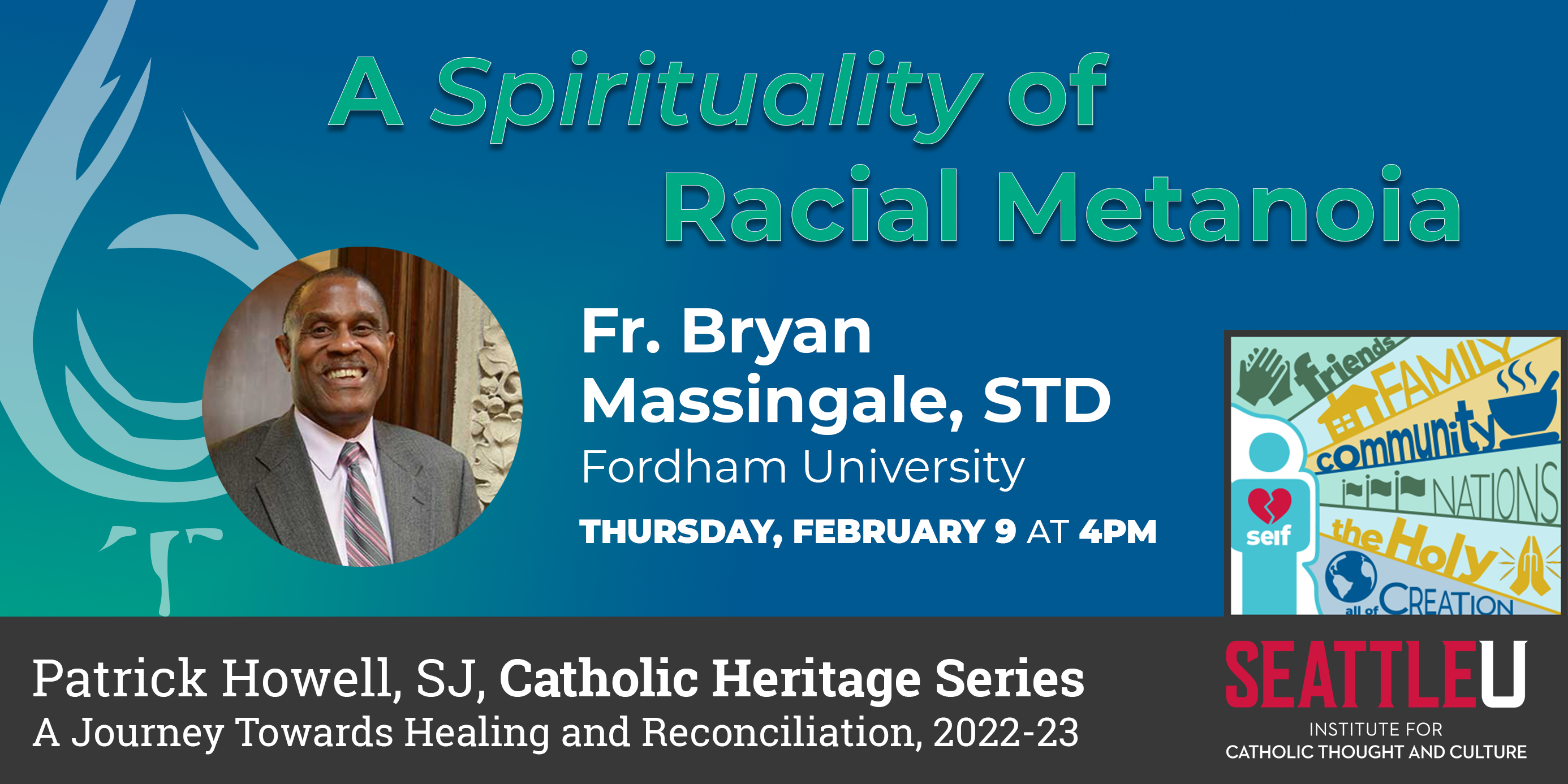 A Spirituality of Racial Metanoia

The rise of white Christian nationalism poses an intersectional threat to the well-being of the Black and LGBTQ communities, and to democracy itself.  Inspired by the thought of Pope Francis, this presentation outlines the conversion process needed by both individuals and society for authentic racial justice and reconciliation.

Bryan N. Massingale is the James and Nancy Buckman Professor of Theological and Social Ethics, as well as the Senior Ethics Fellow in Fordham’s Center for Ethics Education. Professor Massingale is a leader in the field of theological ethics and is an expert in Catholic Moral Theology, Catholic Social Thought, African American Religious Ethics, Racial Justice, Liberation Theologies, Race and Sexuality. His current research projects explore the contribution of Black religious radicalism to Catholic theology; the notion of "cultural sin" and its challenge to Catholic theological ethics; and the intersections of race and sexuality in both social life and Catholicism. He is a past Convener of the Black Catholic Theological Symposium and a former president of the Catholic Theological Society of America.  In addition to his academic pursuits, Professor Massingale strives to be a scholar-activist through serving faith-based groups advancing justice in society.  He is a noted authority on issues of social and racial justice, having addressed numerous national Catholic conferences and lectured at colleges and universities across the nation. Read Professor Massingale’s complete biography and select list of publications here. 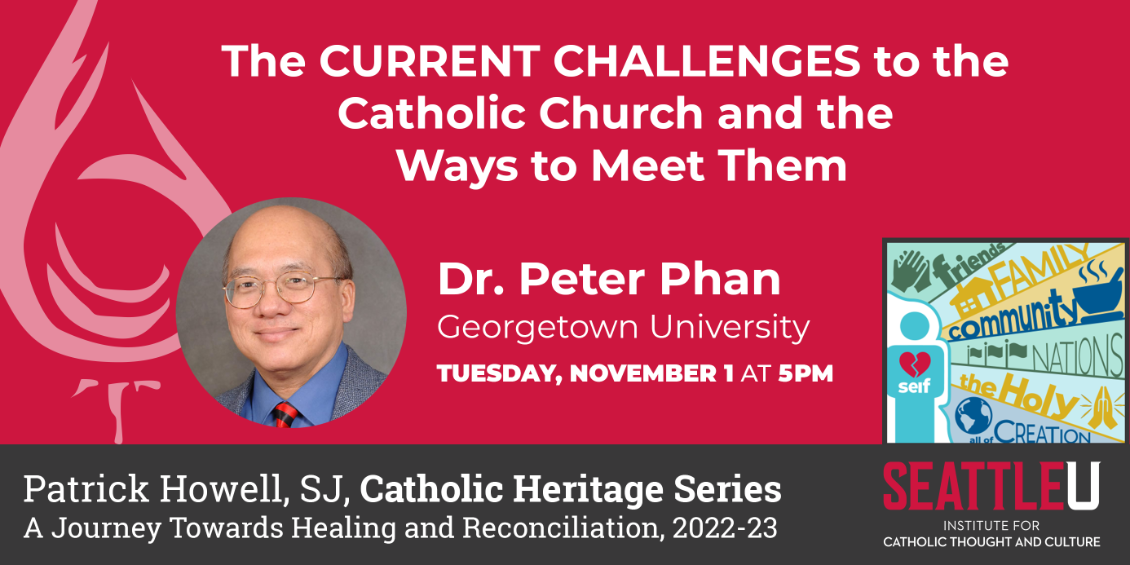 The lecture analyzed three current challenges to the Catholic Church, especially in the United States, to the task of threefold reconciliation, namely, with creation, with humanity, and with God, and discuss the various ways to promote this reconciliation. For the first challenge, reference was made to Pope Francis's Laudato Si'; for the second, to his Fratelli Tutti, and for the third, to his Evangelii Gaudium.

Peter C. Phan, a native of Vietnam, emigrated as a refugee to the USA. in 1975. He obtained three doctorates, the Doctor of Sacred Theology from the Universitas Pontificia Salesiana, Rome, and the Doctor of Philosophy and the Doctor of Divinity from the University of London. He was also awarded the honorary Doctor of Theology from Chicago Theological Union and the honorary Doctor of Humane Letters from the College of Our Lady of the Elms. He began his teaching career in philosophy at the age of eighteen at Don Bosco College, Hong Kong. In the United States, he has taught at several universities and now is at Georgetown University, Washington, DC, where he is currently holding the Ignacio Ellacuría Chair of Catholic Social Thought. He is the first non-Anglo to be elected President of the Catholic Theological Society of America. In 2010 he was given the John Courtney Murray Award, the highest honor of the Catholic Theological Society of America. His publications range far and wide in theology. They deal with the theology of icon in Orthodox theology; patristic theology; eschatology; the history of mission in Asia and liberation, inculturation, and interreligious. Read Dr. Phan’s full bio here.

The annual Catholic Heritage Series, launched in 2010, engage the intellectual and religious communities of the Seattle area and the Seattle University community to explore aspects of the Catholic Intellectual Traditions and the intersection of Catholicism and culture.

We are thrilled to announce that the Catholic Heritage Lectures will be re-named the Patrick Howell, S.J. Catholic Heritage Series. This is made possible thanks to the generosity of Timmie Hollomon; this gift will underwrite the Patrick Howell, S.J. Catholic Heritage Series for years to come. Fr. Pat Howell, who passed away last November, was a founder of the Institute for Catholic Thought and Culture. Inspired by the vision of Vatican II, he was passionate about bringing the Catholic intellectual tradition to life. In his own words, “the ICTC’s Catholic Heritage Lectures are committed to providing spaces and conversations where these deeper, soul-searching examinations can occur - with the hope that they open up the ancient places, the foundations of one’s soul, and the delight that one is getting closer to the truth.”