A Journey Towards Healing and Reconciliation

"The Time is Always Right to do What is Right"

The Black Catholic Advisory Circle of the Archdiocese of Seattle, in partnership with the Institute for Catholic Thought and Culture and Campus Ministry at Seattle University will host a Mass celebrating the legacy of Dr. Martin Luther King Jr. The keynote speaker is Malcolm Nelson, Principal of St. Therese Catholic Academy. For more information, please contact the office of Multicultural Communities at (206) 382-4828 or the Black Catholic Advisory Circle at bcacseattle@gmail.com 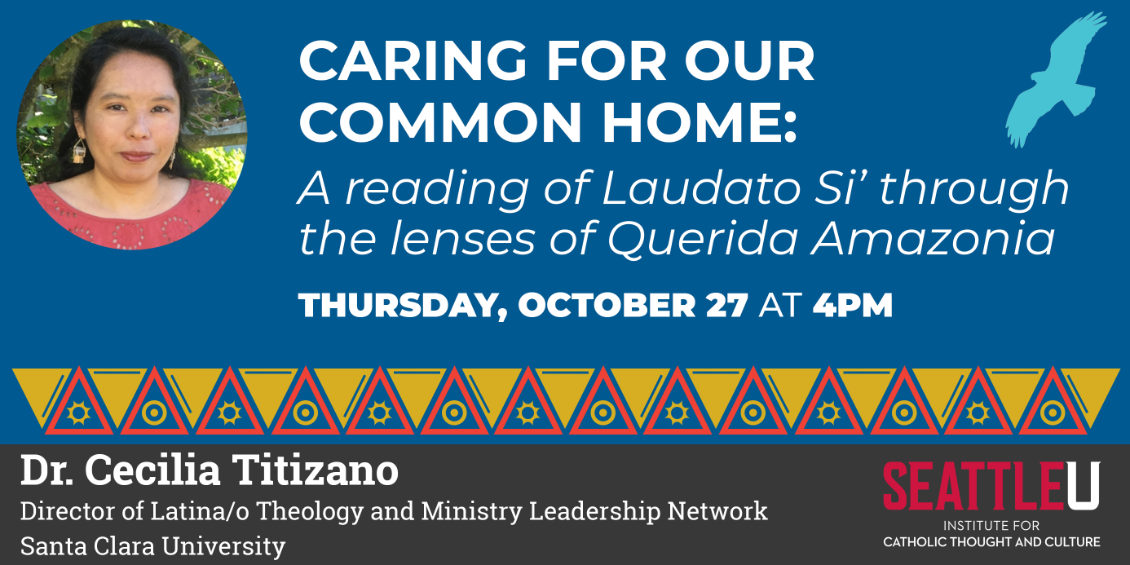 Caring for Our Common Home: A reading of Laudato Si' through the lenses of Querida Amazonia

Pope Francis, in his encyclical Laudato Si' calls for an ecological conversion. In his view, we are no longer the owners of creation, nor is nature available at our disposal. Yet, the ecological conversion that Pope Francis seeks is almost impossible without problematizing traditional substance ontology or ways of being. We need a complete overhaul of how we understand reality. I suggest Pope Francis offers us a pathway forward in his apostolic exhortation letter Querida Amazonia. I invite you to navigate the richness that emerges from reading Laudato Si' through the lenses of Querida Amazonia.

An event for faculty and staff, lunch included

Across the Abya Yala continent, indigenous people, many Christians themselves, are decolonizing the religious landscape, placing their epistemologies and philosophical/spiritual principles at the theological table. In this presentation, I suggest that the first step to incarnate Francis's cultural dream of intercultural encounters among cultures, is to pause, and make sure that we truly comprehend indigenous complex philosophical systems. Then, through an inter-religious, intercultural hermeneutics, place in dialogue indigenous philosophical/spiritual systems and the foundational theological and metaphysical assumptions that sustains Christian dogmas. The result could be a richer pluricultural Church.

Dr. Cecilia Titizano is a native of Bolivia of Quechua-Aymara descent. She is currently the Director of Latina/o Theology and Ministry Leadership Network of the Jesuit School of Theology of Santa Clara University. Dr. Titizano is a Catholic theologian and teaches at NAITTS an Indigenous Learning Community (formerly known as North American Institute for Theological Studies). For many years, Dr. Titizano has worked among Quechua and Aymara communities. Her research areas include Indigenous philosophies and ethics, relational ontologies, and Indigenous and feminist decolonial thought. She currently serves in Memoria Indígena as an advisory board member and is part of the Comunidad de Sabias y Teólogas Indígenas del Abya Yala (COSTIAY). 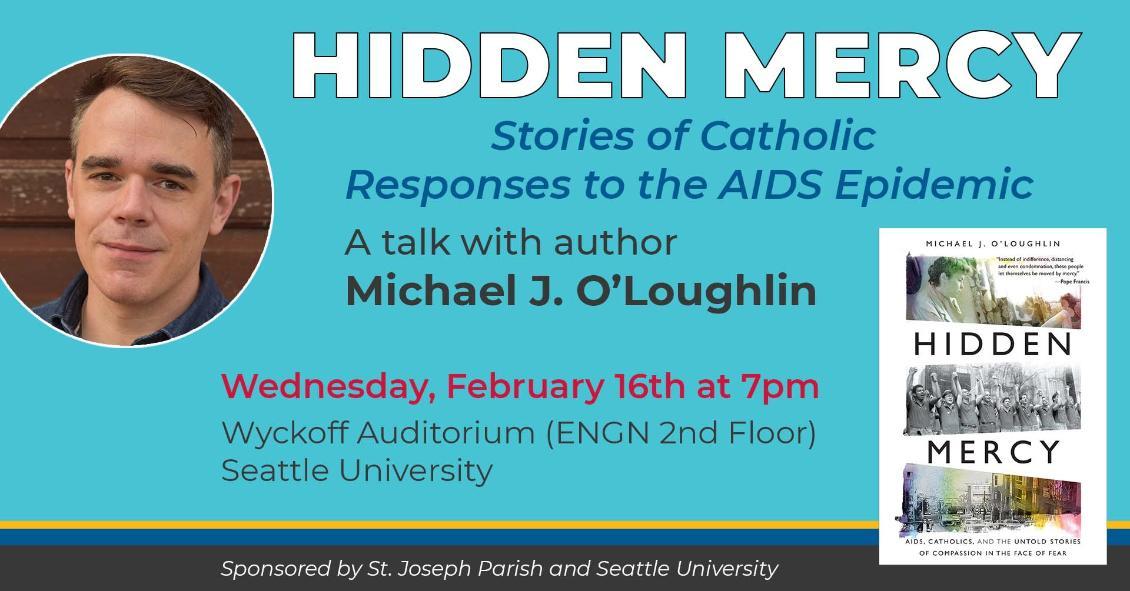 Hidden Mercy: Stories of Catholic Responses to the AIDS Epidemic

About Hidden Mercy:
Set against the backdrop of the HIV and AIDS epidemic of the late twentieth century and the Catholic Church's crackdown on gay and lesbian activists, journalist Michael O'Loughlin searches out the untold stories of those who didn't look away, who at great personal cost chose compassion—even as he seeks insight for LGBTQ people of faith struggling to find a home in religious communities today.

Michael J. O’Loughlin:
Michael J. O’Loughlin is an award-winning journalist and national correspondent for America Media. He is the host of the New York Times recommended podcast Plague: Untold Stories of AIDS and the Catholic Church, which was honored with awards from the National LGBT Journalists Association and the Religion News Association. Prior to joining America, O’Loughlin was a national reporter for The Boston Globe. 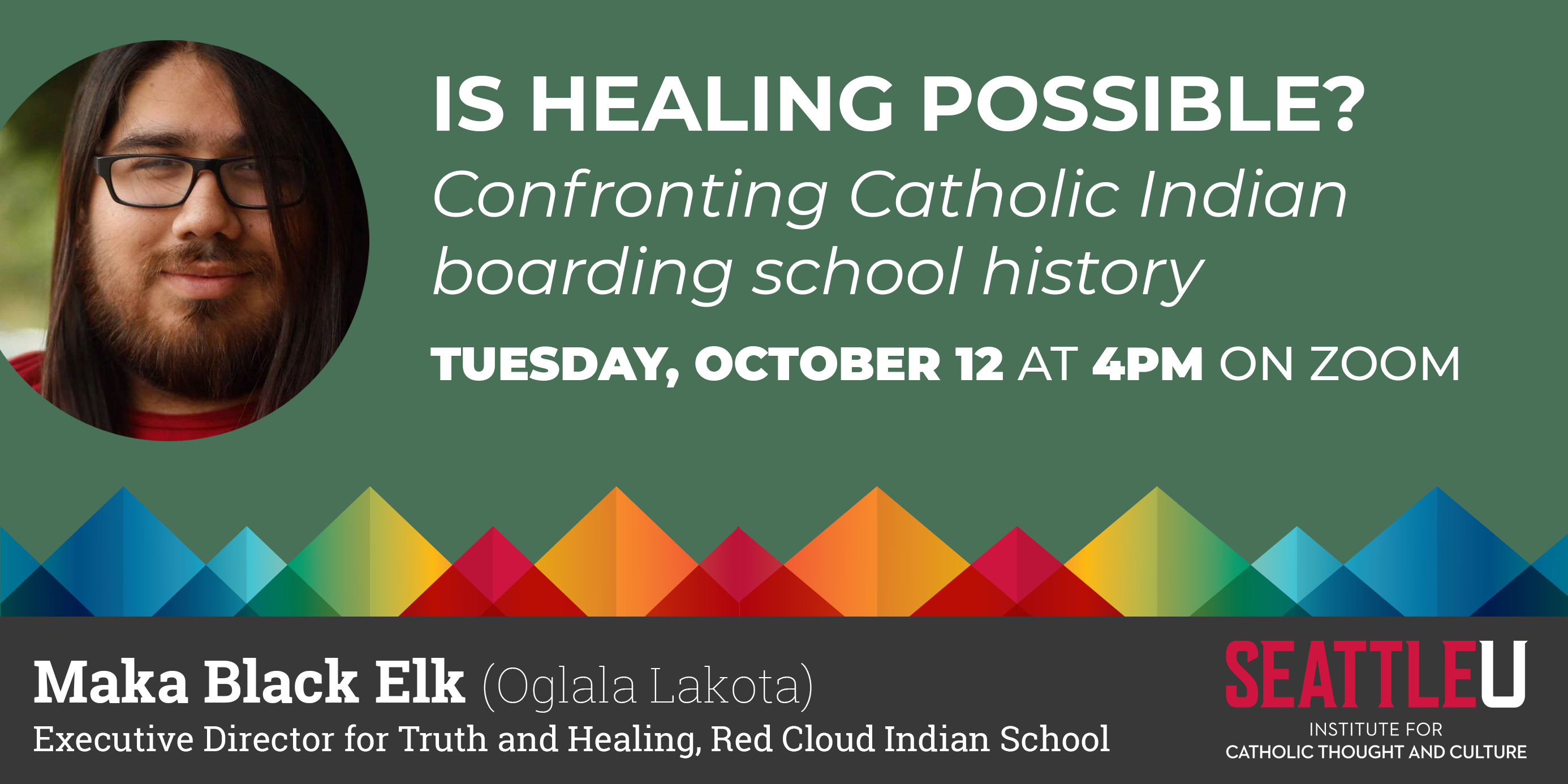 Prior to entering this discussion participants are encouraged to watch this brief explainer video on the harms and legacy of Indian boarding schools in the United States.

The history of Indian boarding schools in the United States exemplifies a longstanding erasure of the experiences of American Indian nations. The Catholic Church and other Christian denominations, with the support of federal dollars originally meant for individual Indian families, operated hundreds of boarding schools in the late 19th and early 20th centuries. Critical to the foundation of these schools was the systemic suppression and eradication of native languages and culture. Many Native American children suffered from physical, mental, and sexual abuse, separation from family, loss of culture and language, and even death.

This conversation will bring this history into perspective as the experience of one particular former Indian boarding school is shared and discussed. The Society of Jesus was one of many Catholic orders that ran some of these schools including the one highlighted here. This dialogue is focused on understanding that history, facing the challenges produced by that history, and seeking to understand what the future might hold for the possibility of healing. Questions that will be pondered include: What must the Church do to reckon with this history? How can we imagine a Catholic faith that rejects the colonial project?

Maka Black Elk (Oglala Lakota) is the Executive Director for Truth and Healing at Red Cloud Indian School, formerly known as Holy Rosary Mission, on the Pine Ridge Indian Reservation in South Dakota. Red Cloud is one of the few remaining Jesuit schools serving an indigenous community in the country. As an alumnus of Red Cloud, Maka continued his Jesuit education at the University of San Francisco. He returned to Red Cloud after earning his master's in Peace and Human Rights Education at Teacher's College, Columbia University. Over the past eight years, Maka has been a high school history teacher, volunteer coordinator, and the director of curriculum during which he earned a master's in Educational Leadership from the University of Notre Dame. He serves as the chairperson of the American Indian Catholic Schools Network and is a board member of the National Native American Boarding School Healing Coalition and the Catholic Volunteer Network. He also serves as an advisor to the Taking Responsibility initiative on clergy sexual abuse at Fordham University. Maka has dedicated much of his work to leading and fostering educational empowerment for his community through his unique lens of being both Lakota and Catholic.