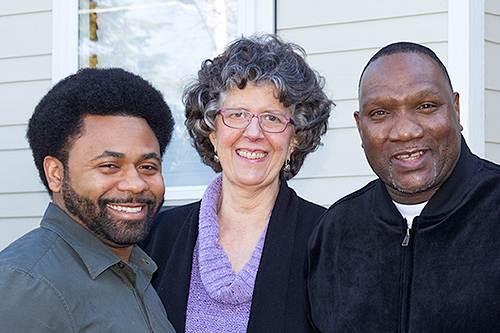 In south Seattle lies Skyway, a community where a third of the households earn less than $35,000. Although the population is growing, services have not kept up. The Matumaini Counseling and Community Center is filling a void by providing mental health counseling to children, youth, and families. The center opened its doors in April.

Matumaini is the brainchild of James Norris, MAP ’09, center executive director. He enlisted the aid of longtime community mental health therapist Jerry Evergreen, MAP ’90, to serve as clinical director and brought out of retirement Joan Dinkelspiel, MAP ’01, who is the development director and a family therapist. Karin Hoggard, MAP ’09, rounds out the clinical staff.

Norris traces his decision to open the center in Skyway to his early years growing up in Los Angeles. There he saw his share of violence and lost lives.

“It was tough, it was challenging, but I had people who came into my life that encouraged me and showed me a different way--how to live and be successful and move forward,” he said.

After attending Western Illinois University and coming to Seattle, Norris enrolled in the MA Psychology program. He did his practicum at the YMCA with homeless youth who had aged out of the foster care system. Unlike a traditional setting for therapy, the drop-in center focused on creating an environment where a relationship of trust and respect became the entry point for therapy.

“That experience and my education brought me to this place to give back to young men, women, and children and give them tools so they can reach their goals,” Norris said.

With Evergreen, Dinkelspiel, and Hoggard part of the team, the center is bringing much-needed resources to Skyway youth and families.

None of this would have been possible without the tremendous support of Pastor Lawrence Willis of True Vine of Holiness Missionary Baptist Church in Skyway, which houses the center. Pastor Willis recognizes the importance of having local services in the community.

“One of the greatest needs in this community is mental health for our middle-aged young men, ages 22 to 32, because of the epidemic with PCP, with drugs, and how the community reacts,” he said. “Too many young men have been outcasts in their families, pushed to the side, and shunned. They need somewhere to go and someone to talk to. I believe in James and what the clinic can bring to this area, how it can heal the community and the families. I can pastor and preach, but he has the profession and education to work with that population.”

For Dinkelspiel, whose experience in community mental health includes working with homeless and drug-dependent adults, young children and their families, grandparents, and foster parents, the Matumaini mission and vision drew her readily out of retirement.

“This counseling center is important right now as youth and families in the inner city are moved through gentrification to outlying areas,” she said. “Many people are left without resources, and they deserve our support. I’m motivated to give back to our Seattle community,” she said.

Jerry Evergreen was a natural fit to serve as clinic director. With more than 25 years of experience in mental health as a therapist and clinic supervisor, he has developed policies and procedures that holistically address the needs of clients. For the staff of therapists and interns, he provided supervision on issues such as depression, anxiety, trauma, grief and loss, divorce and separations, and other family disruptions and transitions. Karin Hoggard, MAP ’09, completes the staffing. Hoggard has been a therapist at the Center for Human services where she worked with children, families and refugees.

Norris has big dreams for the center, hoping in five years to be a place with a full staff of therapists and student interns and where the community can come and feel connected.

“This is my responsibility because I was been given so much by others, people who invested me,” he said. “This is how I honor them—by investing in others so they reach their potential.”