Major General Barbara (Bonine) Holcomb, ’87, is the recipient of the 2018 Professional Achievement Alumni Award. She is the Commanding General of the U.S. Army Medical Research and Materiel Command (MRMC) and Fort Detrick, Md., and is Chief of the U.S. Army Nurse Corps. Maj. Gen. Holcomb is the first nurse to serve as commander of MRMC and Ft. Detrick, a position that has traditionally been held by a physician. She oversees 6,800 people worldwide and a $2.4 billion budget.

Coming to Seattle University from a small town in Montana, Maj. Gen. Holcomb had no thoughts of military service. However, when a nursing scholarship opened up in ROTC, her plans changed. After graduating from Seattle U as an Army ROTC Distinguished Military Graduate with a Bachelor of Science in Nursing, she earned her master’s in nursing administration from the University of Kansas, master’s-level certification in emergency and disaster management from American Military University and master’s in military strategic studies from U.S. Army War College.

Maj. Gen. Holcomb credits Seattle University with giving her the opportunities that helped to define her. “Seattle University provided me with a sense of gratitude and service, of being part of something bigger than myself,” she says.

As a cadet in ROTC, she was denied the role of battalion commander because the cadre said that a nurse would never be a commander. Maj. Gen. Holcomb proved them wrong when she first became a commander as a captain and subsequently commanded at every rank thereafter. This included serving as the first nurse to command Landstuhl Regional Medical Center in Germany where Air Force, Navy and Army medical personnel came together to focus on the care of wounded warriors evacuated from Iraq and Afghanistan.

Maj. Gen. Holcomb originally planned to do three to four years of military service, but during her first position as a clinical nurse at Madigan Army Medical Center, she realized how much she loved the work and the military healthcare mission. Following several clinical assignments, including gaining certification in emergency nursing, she went into administrative positions, planning training for nurses going through the officer basic course at Fort Sam Houston in Texas. Additionally she served as the Base Realignment and Closure transition officer at Fort Sam Houston and as the Forces Command Surgeon, among other roles.

Maj. Gen. Holcomb was deployed to Desert Shield/Desert Storm, Macedonia and Kosovo. In 2010 she landed her dream job when she took command of a Combat Support Hospital in Iraq in support of Operation Iraqi Freedom and New Dawn. 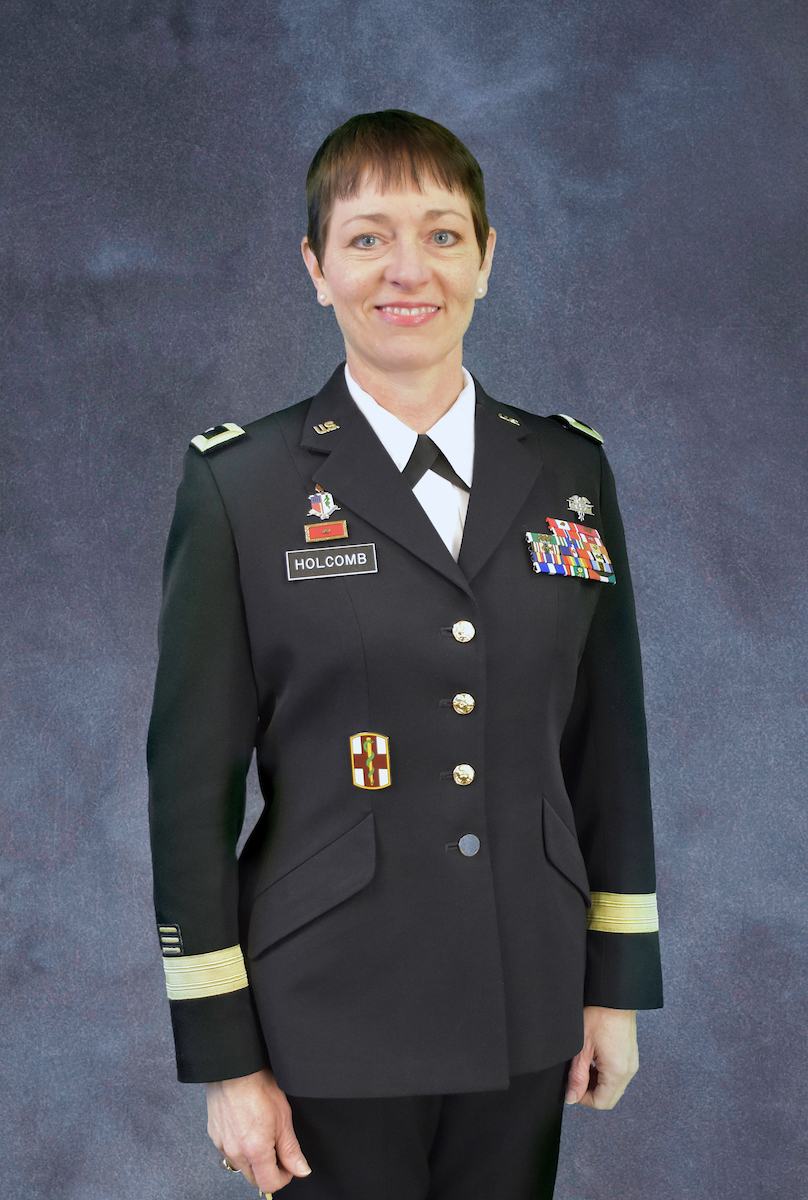