Alumni Spotlight: How Allison Namba, ’22, Charted Her Own Path

Posted by Seattle University Alumni Association on Monday, June 27, 2022 at 9:20 AM PDT 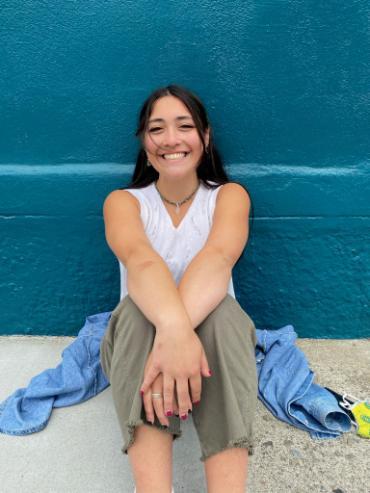 Earlier this month, Seattle University’s Commencement was back in-person for the first time in three years. For graduates like Allison Namba, ’22, this was a time for celebration and, in the spirit of Ignatian pedagogy, a time for reflection.

As with all her cohorts, the past few years have been anything but ordinary. Coming into her freshman year out of Shorewood High School in Shoreline, Namba had no idea that half of her tenure at Seattle U would be spent online in her 900 square foot shared home on Capitol Hill due to the pandemic—let alone the personal challenges she’d encounter along the way.

Despite all this, Namba persevered and left her mark at Seattle University. And now, as a graduate, she looks to take the experiences and education she gained here to make a difference.

Like many students coming out of high school, Namba didn’t exactly know what she wanted to do with her life. Up to that point, her true passion was softball, but she wasn’t sure if playing intercollegiate athletics was in the cards. She also felt that a career in nursing aligned with her personality and skillsets but didn’t know necessarily what the profession entailed.

“It’s scary to think about becoming a nurse,” recalls Namba. “As a high school senior, it’s not necessarily something you imagine yourself actually doing.”

When her intercollegiate softball plans fell through, she confided in a friend facing a similar situation. On a whim, they decided they’d tour colleges together. After visiting Seattle University, Namba knew she found the right fit.

“I wasn’t sure what I was going to do. But after touring the campus, learning more about the College of Nursing and the CPL (Clinical Performance Lab) and learning about all of the student organizations on campus, I knew I found the right place,” she recalls.

Upon arriving at Seattle University in the Fall of 2018, Namba unexpectedly lost a number of friends and family, which made balancing college coursework and grieving a challenge.

“It was a turbulent time,” she says. “But I was really lucky to have incredible people around to support me.”

In addition to her support system, Namba looked to competitive sports to help cope with her grief. Beginning her freshman year, she joined several intramural teams and even made the women’s club lacrosse team—a sport she never played before.

Namba also began making an impression with several prominent student organizations on campus, spearheading successful programming and activations with the Student Events and Activities Council (SEAC) and the Center for Student Involvement (CSI). But it was when she discovered Redzone, a student-led group that aims to bridge the gap between athletics and the student body, that she hit her stride.

“It wasn’t until I joined [Redzone] that I realized this is it,” recalls Namba. “The sense of community, connection and relationship building on campus. This is what I was supposed to be doing this entire time. This was the spice of life and I loved it.”

Despite the pandemic essentially grinding everything to a halt her sophomore and junior years, Namba found ways to support Redzone, eventually leading to her appointment as the group’s president where she led the planning and execution of student programming around Homecoming and athletic events, which included a trip to the Western Athletic Conference (WAC) Basketball Tournament in Las Vegas.

Namba’s leadership as president and reputation among her advisors and peers led to her nomination as a Homecoming Royal last fall.

“It was unexpected,” recalls Namba. “It was just nice to know that people nominated me and that I deserved to have their vote.”

Amid her success in extracurricular activities and intramurals throughout her time in college, Namba always realized precisely why she was at Seattle University in the first place: to become a nurse.

“It always came down to the fact that I really like people,” recalls Namba. “I enjoy taking care of people.”

In addition to her coursework, Namba and her cohorts took part in a series of required clinicals throughout their time at Seattle U, which allow College of Nursing students to work directly with patients in a supervised clinic setting. When she had the opportunity to work in a telemetry unit her sophomore year, where a large majority of her patients were above the age of 65, she realized that she wanted to focus her career on senior care. Her relationship with her grandparents further solidified this plan.

“I think about my own grandparents’ lives, and the stories they have to tell and everything they’ve experienced up to that point. To be with patients at that stage of their life, and to care for them, is pretty special.”

Leading up to graduation, Namba completed her degree requirements by fulfilling 156 hours of her practicum at an acute rehab clinic at Cherry Hill, working with patients recuperating from major surgeries and strokes – all the while maintaining a part-time job at an Amazon warehouse.

With her family and friends cheering her on, Namba walked across the stage earlier this month at Climate Pledge Arena with a degree in Nursing – with honors.

A TIME FOR REFLECTION

This summer, Namba plans to focus her time on studying and passing the National Council Licensure Exam (NCLEX), a required step to becoming a registered nurse. She plans to work in a telemetry unit this fall and eventually become a traveling nurse, focusing on senior care.

And she is looking to take some time for herself.

“Nursing school was really hard, while balancing that with extracurriculars, my part-time jobs, clinicals and everything else going on in my life,” says Namba. “While I’m excited for what’s ahead, it’s really important that I take a pause, give myself some time to adjust and sort of drink in the last four years.”

In looking back at her time at Seattle U, Namba credits her friends, family and mentors for helping pave the way.

“I’m just really happy with where I’m at. I have a lot of gratitude for Seattle University, for all of the memories and an amazing support system that’s been right there with me for the last four years.  “I’m proud of my accomplishments but know that I couldn’t have done it without their support.”