Alumni Board of Governors Excited to Welcome Eleven New Members

Posted by Seattle University Alumni Association on September 19, 2022 at 11:09 AM PDT 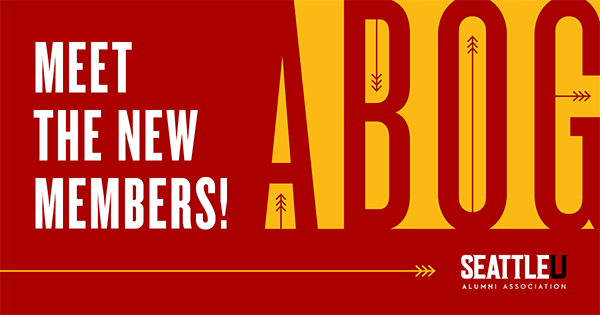 After a thorough and thoughtful process, Seattle University’s Alumni Board of Governors (ABOG) is pleased to announce the addition of eleven new members.

“There’s a high level of energy and enthusiasm among our incoming board members,” said Megan Lemieux Bell, ’95, ABOG President. "They bring a wealth of valuable skills, perspectives and voices to the table – both individually and collectively.”

The Alumni Board of Governors is a working board of Seattle University alumni who provide governance, representation and support for the programs and initiatives of the Seattle University Alumni Association (SUAA). Its overarching goal is to offer meaningful ways for alumni to stay engaged and connected with SU.

Ellen Whitlock Baker, Assistant Vice President of Alumni Engagement, said, “We held an all-call for applications this year, as opposed to a nominating process in the past. We wanted to reach any alum willing to raise their hands to join the board, and hoped to do so in the most equitable way possible.”

The board received a record number of applications for open ABOG seats from alumni from many different graduating years, degrees, majors and lines of work. The process was managed by the ABOG Recruitment Committee, made up of Lemieux Bell, Whitlock Baker; current and former ABOG members Megan Cycyota, ’07, Amber Larkin, ’19, Karen Lynn Maher, ’00, Doris Martinez, ’09, ’11, and DJ Weidner ’07, as well as SUAA Operations Coordinator Camaron Farrington.

Lemieux Bell and the ABOG executive committee have identified three areas of priority for the coming year: “We’ll be focusing our efforts on partnership and professional development, alumni outreach and serving as a hub for our incredible alumni community. I look forward to serving as ABOG president and collaborating with this amazing team to tackle common goals and new initiatives,” said Lemieux Bell.

The incoming Alumni Board of Governors members are: 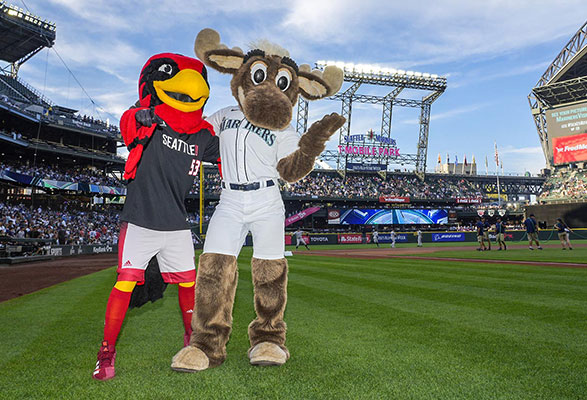 Let’s get the bad news out of the way first: the Mariners lost to the Yankees, 9-4.

As far as we can tell, everything else about SU Night at the Mariners was a rollicking success punctuated by the pregame mixer, President Peñalver’s ceremonial first pitch, a pair of Mariner home runs, and peak Seattle summer vibes.

The event was intended as a way to bring the Redhawk community together for a fun night at the ballpark while simultaneously celebrating the class of ’22. It proved to be even more than that.

The festivities got underway as soon as the stadium gates opened. Several hundred members of the Redhawk community made their way to the Rooftop Balcony at T-Mobile Park for food and drinks, giveaways, photo opps with Rudy the Redhawk, and tons of spirited socializing.

“It was amazing to see such a huge turnout,” said De’Andre Jones, ’18, director of alumni engagement. “When we began planning the event with the Mariners last spring, we expected maybe 350 to 400 folks to attend…not nearly 1,000!”

Jessica Palmer, ’16, ’22 remarked on the buzz that was in the air: “It was wonderful to see so many SU people smiling and enjoying each other’s company. I chatted with quite a few classmates and made some new acquaintances as well. And from a broader perspective, it was pretty neat to see the school you love being featured on such a huge stage.”

Speaking of stages, Seattle University was front and center as President Peñalver took the mound. Throwing out the first pitch was a dream come true for the Puyallup native, who grew up cheering for the Mariners. The moment was made all the more special by Peñalver being joined on the field not only by his mother and father, but also his son, Jai, who did the catching duties. The pitch was an arching breaking ball that appeared a little high and inside, but Rudy the Redhawk called it a strike – and we know better than to question the keen vision of a hawk.

The President’s pitch was cheered with boisterous fanfare, in stereo surround sound, from the SU community seated all around the ballpark.

As for the baseball, the Yankees got on the board quickly and never relinquished the lead. We console ourselves by remembering that the season is a marathon, not a sprint. And honestly, is there a cooler hang-out spot than T-Mobile Park on a summer night, win or lose?

Throughout the game, it was great to see the class of ’22 mixing and mingling and enjoying an impromptu 1-month class reunion.

Midway through the game, Seattle U was featured on the massive centerfield scoreboard. And once again, the SU crowd made their school spirit known to all corners of the stadium.

Afterwards, Seattle U staff member Yolanda Cieters summed up the evening by saying, “It was amazing for many reasons, but most importantly, I’ve ever met so many alumni and colleagues, all in one night, in such an informal, casual setting. This type of socializing with SU folks really supports a sense of community building.”

We wholeheartedly agree, and we can’t wait for the next opportunity to get together.

Check out a photo gallery and video from this special night!