Victim to Survivor to Leader

Seattle U Collaborates with Universidad Rafael Landivar, Guatemala on
project to help victims of gender-based violence heal and thrive 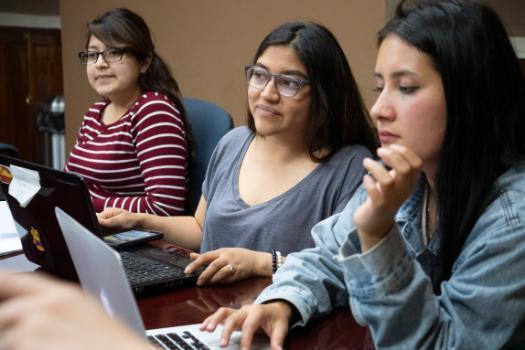 Global engagement continues to be a strategic priority at Seattle University, underlying our mission to create leaders for a just and humane world. The Central America Initiative, which derived from the university’s strong partnership with Universidad Centroamericana in Nicaragua, has expanded to include outreach, programs and research with universities and organizations throughout the region.

For the past two years, Kristi Lee, PhD (clinical mental health counseling) has led groups of master’s level student researchers to Guatemala to assist with a study on how female victims of gender-based violence survive, heal, and go on to thrive in collaboration with faculty and students at Universidad Rafael Landivar, Guatemala’s Jesuit university. By interviewing women victims of gender-based violence in their native Spanish language and analyzing the information they collect, Seattle U students are developing transferable skills, building solidarity through mutual respect and understanding and ultimately learning to be global citizens, a defining characteristic of a Seattle U education. Lee’s research is an example of the kind of collaboration Seattle U aspires to engage in with Jesuit universities around the world through a new Global Jesuit Initiatives Endowment.

Violence against women is a worldwide problem. The United Nations calls gender-based violence a “grave violation of human rights and one of the greatest challenges to achieving gender equity.” Guatemala, a beautiful country known for its volcanic landscapes, Mayan ruins, coffee farms and history of brutal colonization by the Spanish and civil war, has the third highest rate of gender-based violence and “femicide” in the world. According to experts, government inaction and impunity underly the systemic torture, mutilation, rape and murder of women. Extreme poverty and lack of education also have an influence.

The goal of Lee’s research is two-fold: To develop a formalized program that therapists in Guatemala can implement to help victims of gender-based violence move along a pathway from healing to empowerment, and to train counseling students and professionals in the U.S. to provide culturally relevant services to Central American female clients who may have experienced violent abuse. The project has received financial support from the Central America Initiative Endowment, as well as from private donors.

A New Project and Partnership

In 2017 Lee and Serena Cosgrove, PhD (international studies), connected with faculty at Universidad Rafael Landivar (URL) where Seattle U has an established agreement for collaborative research and educational exchange through the Central America Initiative. The two had partnered on a previous, separate project in Guatemala, focused on an NGO working with women victims of gender-based violence.

“Serena and I traveled to URL’s campus in Quetzaltenango and met Director of Research Ana Marina Tzul Tzul and Fabiola Hurtado, a professor of psychology who is my Guatemalan counterpart,” Lee says, “Fabiola also trains counseling students. Talking with them about our research on gender-based violence and healing, I felt an instant connection. The four of us agreed then and there to continue this research as a team.”

The new project would take place in partnership with NGO Asociación Nuevos Horizontes (New Horizons), an organization in Quetzaltenango that has served abused women and their children since 1989. Cosgrove and Tzul would focus their research specifically on how abuse manifests in rural, Indigenous women. Lee and Hurtado’s work would focus on the pathway women travel in healing from gender-based violence, informed by the earlier findings at Asociación Generando.

Aware of Lee’s research, College of Education Development Director Peggy Fine introduced Lee to a COE alumnus with a connection to Guatemala, who Fine believed would have an interest in her work. Chris Clements ’93, is a Senior Security Technical Program Manager at Amazon. He and his wife, Rebecca, have an adopted daughter from Guatemala and an interest in Latin culture.

“I knew that women and girls in Guatemala are marginalized in various ways and that it’s a systemic problem, but I didn’t know that until recently there were no laws protecting them from extreme violence and murder, which is often at the hands of men in their own families,” explains Clements. “And despite the law, few perpetrators are held accountable. This was eye-opening for me. I went home and told my wife about Kristi’s work to help empower Guatemalan women and we decided this is something we want to be involved with.”

The Clements made a personal gift to support Kristi’s research over a period of three years. In addition, they tapped a generous program at Moz, a Seattle-based software company in the Search Engine Research (SEO) space, where Rebecca is the Chief People Officer.

“Moz matches employees’ charitable giving at 100 percent,” Rebecca says. “Generosity is one of the company’s core values, and it enabled Chris and I to double our support for Kristi’s research.”

In 2018 Lee took three of her master’s students to Quetzaltenango. Together with a group of Hurtado’s students they interviewed the women at Nuevos Horizontes, and then analyzed the recorded interviews looking for repeated information that would reveal a theme. At this point they were specifically looking for what moved women from victim to survivor.

“I was moved by the willingness of many women to tell their stories so that others could learn,” says Marcia Lasalle ’20, M. Ed. (school counseling). “They were ‘survivors.’ They recognized that the violence and abuse they’d endured is a problem and they were no longer willing to ignore it. Many of our conversations with these women focused on their hopes to help and encourage other women get to this point.”

“I now know I have the right not to be abused.”

“I am an elected member of the community council and I know I have the ability to make a difference.”

“I went to therapy and started to love myself.”

“If I had to pay for services, I never would have been able to go. I would still live being beaten every day.”

“I learned from other women in the group that what I was experiencing was abuse.”

“When someone new comes to the group and is in bad shape, we support her, we tell her she isn’t alone, we share our stories. Little by little she gets stronger.”

Lee returned to Quetzaltenango in 2019 with a second group of master’s students. Continuing their collaboration with peers from Universidad Rafael Landivar and with Nuevos Horizontes, the students interviewed more women at the shelter, this time with a focus on identifying what survivors need to become leaders. They also looked at what defines a leader in the context of a survivor’s community.

“The women we interviewed in 2019 seemed to be finding their place in this work,” Lasalle says. “Being a leader can mean creating spaces within the community where women can go and feel safe, places where they can ask questions about everything from the legal process to healing. It’s starting conversations to change the narrative of women’s lives.”

The outbreak of COVID-19 cancelled Lee’s plans to take a third group of student researchers to Quetzaltenango in 2020. To keep analysis of the 2019 data moving forward, Lee asked the Clements for approval to use their gift to pay a few of her students, two of whom had lost jobs to COVID, to work on the project over the summer. They confirmed that Kristi could use the funds in whatever way needed to forward her work.

Two of Lee’s students are currently working on a manuscript (academic article) focused on the 2018 research findings. Two others are working on another manuscript focused on internalized machismo, a version of internalized oppression that manifests in women treating other women as if they have no value. Analysis of the 2019 data continues concurrently.

The next step in the project, working with Hurtado and her students to develop a program based upon the research findings, is currently on hold.

“We can do some collaborative planning remotely, but our teams really need to work together in-person to develop a program and this cannot happen until COVID is controlled to the point that we can travel again,” Lee explains.

In the meantime, she and Hurtado will be co-authoring an article on their research to appear in an upcoming issue of Conversations magazine, a quarterly publication that aims to inspire communication among Jesuit colleges and universities on issues most deeply affecting the quality of Jesuit education.

Support for Collaborative Initiatives with Jesuit Universities Around the World

Seattle University seeks to engage in collaborative programs and initiatives with other Jesuit universities worldwide.

The Global Jesuit Initiatives Endowment was established in September 2019 to support Seattle U faculty and students in pursuing research and information sharing, teaching, service and cultural exchange with their counterparts at Jesuit universities in different regions and hemispheres, strengthening our mission of global engagement.

This new endowment will become a primary resource for all special initiatives with Jesuit institutions around the world beyond the Central America region, which has its own robust endowment. Building the Global Jesuit Initiatives Endowment will be a focus during this final year of the Campaign for the Uncommon Good.

If you would like to support the Global Jesuit Initiatives Endowment with a gift, please contact Jim Hembree, jimh@seattleu.edu.