A Family Legacy of Community, Faith and Philanthropy 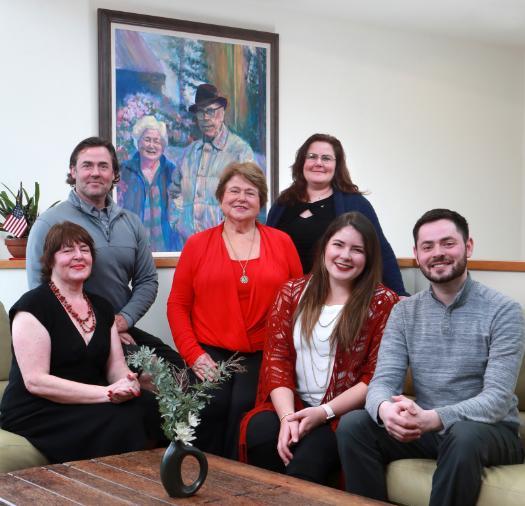 A lifelong commitment to family, faith and community lives in the heart of business owner and philanthropist Suzie Burke. In her own words, “we come from a family of Catholics with conservative values and entrepreneurial spirit, and we are dedicated to being in Seattle.” The Burke family’s strong faith extends to support for Catholic education, exemplified by their long Seattle University legacy, and a new blended gift establishing the Burke Family Endowed Scholarship for Catholic Education.

Suzie was brought up in the Catholic school system, and enrolled in Seattle U’s College of Education with aspirations to become a history teacher. Her two older brothers also attended Seattle U. Joe Burke began his studies prior to enlisting in the Navy, and Gerry Burke graduated with a philosophy degree in 1965.

As was common in her generation, Suzie left college for marriage and motherhood, eventually sending her three children through a variety of Catholic schools. Daughter Gwen attended Seattle U, graduating in 1985 with a Psychology degree. Gwen’s two children, Kurt and Amina, both graduated from Seattle U’s Matteo Ricci College in 2012 and 2016 consecutively, extending the family’s legacy to three generations.

Suzie used her teaching background to open and run a coop pre-school in Kent, and also at her church in St. Stephen’s Parish, Renton. Then in 1975, at the request of her father, she went to work alongside her two brothers at the Burke Industrial Center in Fremont. Nearly 20 years later, upon her father’s death, Suzie took over leadership of the company and expanded its holdings. Both of her daughters worked part-time in the business, known as Fremont Dock Company, and her son, Mike Osterfeld, came on full-time as Vice-President in 2000. Grandson Kurt and granddaughter Amina now work in the family biz.

Building community is Suzie’s passion, and she continues to devote her time and treasure to many non-profit organizations in Fremont. “This is where we do our philanthropy first,” she says. Beyond the local community, we invest in Catholic education. We need more Catholic school educators with a passion for teaching, who are called to a vocation. And we need to provide access to higher education for teachers who want to further their careers and become administrators in our Catholic schools.”

Toward this end, and with the support of her children and grandchildren, Suzie established the Burke Family Scholarship for Catholic Education at Seattle University. Its purpose is to provide scholarships for students who are actively engaged in or pursuing advancement in their educational careers at Catholic schools. Grant recipients must be committed to working in Catholic schools for at least three years after completing their degrees or professional certifications.

The scholarship endowment is funded through a Qualified Charitable Distribution from an existing IRA, which enables Suzie to give now and see the benefits of her gift during her lifetime, and through a planned gift of proceeds from a life insurance policy within the family trust. Due to sound planning over the years, the tax burden on Suzie’s estate is estimated today to be less than the face value of the insurance policy. Realizing this, Suzie sat down with her family members, the sole beneficiaries of the life insurance trust, and discussed her desire to add Seattle U as a beneficiary of the insurance proceeds. The children, who share their mother’s benevolence, agreed. According to Suzie’s financial advisor, Alan Pratt, it’s unique for a family to do this with a policy that’s already in force and owned by an irrevocable trust.

Asked why it’s important to the family to add this charitable component to the family trust, Suzie says, “Giving philanthropic help to charitable organizations in the community is something I’ve done throughout my lifetime, and it’s what my children and grandchildren do. It’s really important for a family to participate in a community that’s bigger than it is, and this is how we choose to do it.”