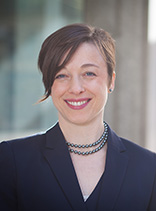 English Department alumna Michelle DeLappe graduated from Seattle University while studying abroad in France in 1998. The SU Honors Program inspired Michelle to switch from a pre-med major to English, as she simply loved her literature classes. She landed her first, post-graduation job in a bakery in the Alps, as part of a work exchange program.

On her way to France for her study abroad term, Michelle stopped in Washington, D.C. for an MLA conference. At the time, she intended to pursue graduate studies in literature to eventually become a professor – though listening to presentations at the conference about the state of the profession at the time led her to reconsider her plan.

Upon returning to the U.S. in 1998, Michelle worked for a year at Amazon.com—back when it was still a bookstore. By then, she had saved enough for another year abroad, this time with hopes to teach English and improve her Spanish in the Andes Mountains of Venezuela. After returning, she waited tables until finding a job as an international student advisor and assistant manager of a Kaplan test prep center. But Michelle’s goal was to return to Venezuela to settle, since she had enjoyed her previous time spent there so much. In late 2002 she returned to Venezuela, taught English in the Universidad de Los Andes extension program, and completed a masters in linguistics at the same university. She returned to Seattle in 2005, first pursuing a law degree, then a career as a state and local tax lawyer in a Seattle law firm. “Career plans, like all facets of life, are subject to change as we learn and grow as individuals,” says Michelle. Though finding her new path took some time and anxiety, she developed a clear career objective. Michelle credits using this time to explore different worlds and learn more about herself as an important step in pursuing her law career.

“I believe that immersing oneself in other people’s stories and experiences through literature can help us become better humans—more empathetic and effective in interacting with others in our work or personal lives, and more successful in trying to make some modicum of sense out of this complicated, challenging world,” she says. Studying literature reinforced what Michelle calls “good mental hygiene”: critical reading skills, logical and creative thinking habits, and persuasive communication abilities. These are key skills she applies in her career while reading and writing legal briefs, strategizing cases, and negotiating resolutions to disputes.

Michelle has the following advice for current English Department students about how to maximize their time at SU:

“Challenge yourself to learn as much as you can. You don’t have to figure out a whole master plan for your life. As a student, I felt there was often pressure to determine what my ultimate career would be, but I see now, in hindsight, that it was impossible at that point for me to have apprehended the range of possibilities. I wish I could have saved myself the anxiety of not knowing and not having a master plan. Just be patient with the exploratory process and be open to a wide range of possibilities, knowing that you possess the tools and resources to eventually settle on one of the many possible paths to a fulfilling career.”