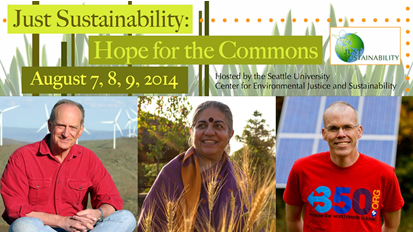 The Center's inaugural conference, Just Sustainability: Hope for the Commons, was held on campus August 7-9, 2014. Over 200 attendees came from 25 states, 12 countries and 11 U.S. Jesuit universities." Attendees included faculty, staff and students, grassroots activists, and representatives from agencies such as the E.P.A.

Those attending our 2014 conference certainly presented research and projects as diverse as the following:

The best papers from our conference were published in a special issue of the journal Interdisciplinary Environmental Review. In addition to featuring Bill McKibben and Denis Hayes, plenary speakers included Sarah Augustine and David Korten. Vandana Shiva sent a prerecorded video message as well.

One of our goals was to build the network of those working on environmental justice and sustainability concerns at Jesuit institutions. So, we were particularly pleased to welcome colleagues from 11 US Jesuit universities.

Jesuit James Hug covered the conference and shared his reflections throughout. Find his writing here, including an “Open Letter to Pope Francis.”

CEJS seeks to expand and deepen our roots and relationships here in Seattle within the academic community as well as with local nonprofits and government agencies. So we were also pleased that organizations like the Duwamish River Cleanup Coalition, Seattle Tilth, and the Environmental Protection Agency participated in the conference.

Conference reflections by Jesuit James Hug titled "A Letter to Pope Francis", "Dreaming the Possibilities Can Be Exciting and Fun", and "Jesuits and Broader Networks Discern A Call to Action". Learn more.

Sustainable Citizen is an online program by which students and adult learners gain a minimum competency in sustainability knowledge, skills, attitudes and behaviors that will launch them forward as sustainable citizens.

Videos of the following conference sessions are now available:

We did not record the workshop sessions. However, three of the Friday sessions were (inadvertently) recorded by our media center. They are: