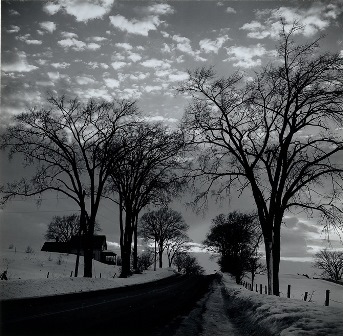 Frank Gohlke is a leading figure in American landscape photography. He has been awarded two Guggenheim Fellowships and two fellowships from the National Endowment for the Arts. Known for his large format landscape photographs, Gohlke's work has been shown at museums all over the world and included in collections such as the Museum of Modern Art, the International Museum of Photography at the George Eastman House, the Australian National Gallery and the National Gallery of Canada..

Gohlke received his B.A. from the University of Texas at Austin in English Literature. At Yale University, where he received his MA in English in 1966, Gohlke met Walker Evans and then studied privately with Paul Caponigro. Gohlke’s photographs came to notice in the influential 1975 group exhibition New Topographics: Images of a Man-Altered Landscape at the George Eastman House International Museum of Photography and Film in Rochester, New York.

He has taught at Massachusetts College of Art; the Art Institute of Boston at Lesley College; the School of the Museum of Fine Arts, Boston; and the universities of Harvard, Princeton and Yale. He is Laureate Professor of Photography at the University of Arizona and Senior Research Fellow at the Center for Creative Photography, both in Tucson, Arizona.