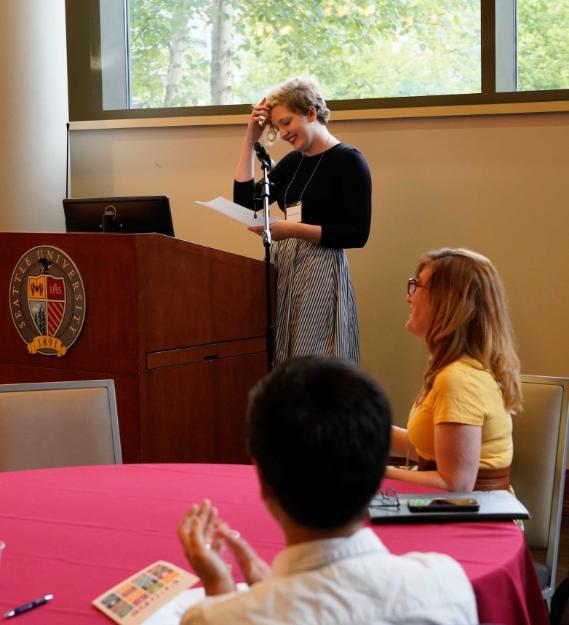 SUURA is an annual celebration of student research. Undergraduate students in all fields of study are eligible to submit and present their research. Students may be nominated by their faculty to present, may be asked to present as part of their major requirements, or may self-select to present individually or in research pairs or groups.

This year, all presentations will be conducted virtually via Canvas in order to accommodate COVID-19 social distancing.

Student researcher presenters will each have their own dedicated Canvas page to disseminate their projects and findings in the manner they feel is most appropriate. Canvas pages will be available for viewing beginning Wednesday, May 12th through conference day Friday, May 14th.

Online student presentations may take the form of one or both of the following:

Each student research presenter Canvas page will include a Discussion Board to facilitate dialogue between the presenter and meeting participants. Presenters are asked to be available for online discussion with interested participants, either from 9:30 am-12 noon or 12 noon-2:30 pm, the day of the conference.

Academic departments will have the opportunity to host synchronous Zoom round table discussions and receptions, beginning at 2:30 pm, the day of the conference. The intent is to provide a community space for continued dialogue and acknowledgment of their student researchers and their work. (The use and format of these Zoom sessions will be at the discretion of each department.)

How to Register for SUURA 2021

Registration is completed via Qualtrix

How Students Apply to Present Their Research at SUURA. What to Do After Applying

If you are a student interested in presenting your research at SUURA:

What to be before registering for SUURA

What to do after registering to present at SUURA

Will SUURA Be an Asynchronous or Real-time Conference?

SUURA will be primarily asynchronous, with a few notable expectations

In reflecting on the current state of our remote learning campus environment and collective bandwidth, we made the difficult decision to organize SUURA as a primarily asynchronous conference this year.  Although this limits real-time engagement, it does provide the notable benefits of allowing all students who would like to present their research the opportunity to do so.  Students also will have substantial flexibility in determining their presentation format.

All presentations at SUURA must have a 100-250 word abstract that explains what your research is about, what method(s) you used to discover your findings, and how your research contributes to the larger discussion of your researched area. Use the three sample abstracts from past SUURA contributors below as a reference for writing your own abstract.

Sample for Science and Engineering (Mathematics)

Given a finite set of integer vectors, S, we consider the set of all lattice walks comprised as ordered sequences of steps whose directions come from S. We further restrict our attention to walks of minimal length, meaning they cannot be shortened through some linear combination of allowable steps from S. We consider the problem of counting the number of such minimal walks terminating at a fixed point (a, b) for various choices of the set S.

This paper will investigate the function of the contrast between the two married couples in Shakespeare’s Merry Wives of Windsor and how it reveals a larger commentary on growing female autonomy in Early Modern England. There has been much scholarly debate over which marriage is superior; this paper will contribute to this discussion by showing that neither marriage is superior. Instead, this paper will argue that the two couples operate as foils of each other, allowing them to simultaneously critique each other. I will support this argument by highlighting the historical evidence regarding the growth of female autonomy. This literary and historical will illustrate how the play argues that female autonomy is not only inevitable, but also beneficial.