As part of the 500th anniversary celebration, a statue of Pacioli was commissioned and installed in the Sansepolcro town square:

The 500th Anniversary celebration is another story in itself, which I am not qualified to recount.  Suffice it to say that a group of Albers professors created an event where there would not have been one and helped put Sansepolcro on the map.  They also helped the town understand more about its historical importance and native-son, Luca Pacioli. They also firmly established Pacioli as the founder of the accounting discipline.  That story does need to be retold, but by someone more knowledgeable than me! 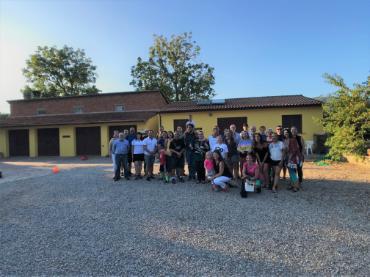 Among the faculty first organizing a study tour were Professor Bill Weis and retired Professor Dave Tinius.  They both were spotlighted in the 25th anniversary celebration and provided many historical insights to the group of over 30 who participated in this trip back to Tuscany.  The event took place over a five-day period – September 4-8.  It included tours of historical venues in the town of Sansepolcro, a visit to the town of Anghiari to visit the Busatti textile factory, inspections of local wineries, and Renaissance feasts and festivities.  All of this was expertly organized by Albers alumna and adjunct professor, Hartley McGrath.

Professor Bill Weis delivering one of his lectures during the 25th anniversary celebration: 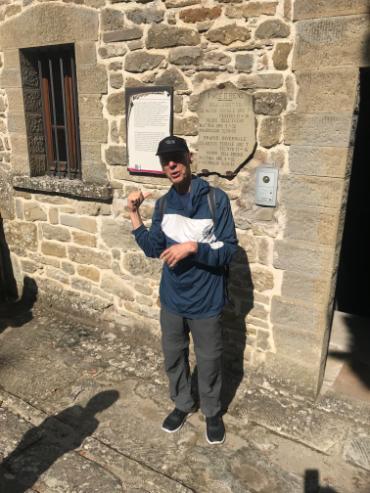 I’ve heard about Sansepolcro for a long time, since the study tour to Sansepolcro took place on an annual basis from 1994 to 2010.  Some pundits described it as a “boondoggle” given the venue and accompanying food and wine, but what would they know?  It was interesting to go there myself and get to the bottom of it, and to be able to testify that everything is on the up and up when it comes to Sansepolcro.  The town would love for the Albers study tours to return.

Renaissance parade in the streets of Sansepolcro: 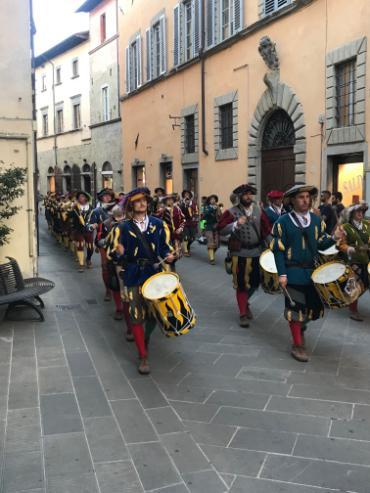 Professor Weis was struck by a few key changes since he last visited.  On the plus side, the city hall building has been reopened after being damaged by an earthquake.  It was an important location for the events celebrating the 500th anniversary of the Summa, and Professor Weis had feared it would never be repaired.  The Capuchin monastery where study tour students stayed had been closed down, but has now been reopened as a convent for five Benedictine nuns.  The Sansepolcro train station has been shuttered, the result of flood damage to the train line that was deemed too expensive to repair.  Instead, a bus service that parallels the train line has been developed.

One of the highlights of the trip for everyone was the installation of the dean, along with adjunct faculty member and alum, Dr. Glenn Lux, into the highly secretive Luca Pacioli Society.  This took place in a rare public event, since the membership of the society is a closely guarded secret.  All we know about the society is that it was instrumental in pulling off the 500th anniversary celebration in 1994.  What is a mystery is what it has been up to since then.

Study tours continue today in the Albers School.  For example, this year study tours were offered to China, Guatemala, and the European Union (defined as Spain, France, Belgium, the Netherlands, and Germany).  And we have not abandoned Italy completely, as Professor Weis leads a group to the Dolomites each year to deliver his popular courses in Emotional Intelligence.

View down toward Sansepolcro from the Montecasale Hermitage: 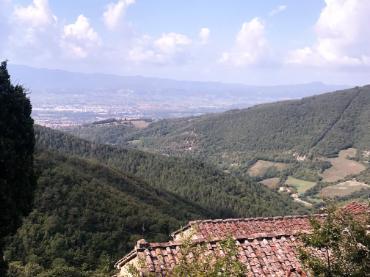 Study tours have proven to be a valuable educational experience for many Albers students over the years.  It’s important to pause and celebrate the role they plan in an Albers education!