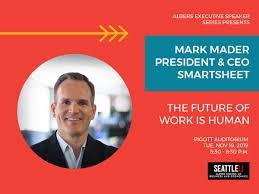 With over 20 years' executive leadership experience in SaaS companies, Mader has served as Smartsheet CEO since 2006. He has been named EY’s Entrepreneur of the Year in Technology for the Pacific Northwest, and GeekWire’s CEO of the Year. On his watch, Smartsheet was named Washington’s Best Workplace by the Puget Sound Business Journal, and Seattle’s Next Tech Titan by GeekWire.

Mader started the evening addressing the theme of his remarks, “The Future of Work is Human.”  While the headlines might make one conclude that machines are taking over, Mader said there is too much unstructured work that robots cannot do.  Too many situations are too complicated for software to handle.

Several times in the evening Mader noted that for an organization to be sustainable, you have to be discovering what is the “next big thing.”  There is only so much in revenue associated with any particular product, so you have to figure out what the next product or service is if the business is going to continue to thrive.  Those insights will usually come from listening to customers about their unmet needs.

Mader also talked about the contradictions one can face.  He described himself as highly impatient, competitive (used to play football in college), and does not want to accept sub-par quality, yet at the same time he has to realize that no one is perfect and mistakes will be made.  Another is A-B testing – true, it’s a test, but you should go in thinking you have a winner.

He is also optimistic about where society is headed, which might not be the conventional wisdom these days.  Why is he optimistic?  Because the trend is toward greater empowerment for more and more people and this will result in them having a positive impact broadly across society.

When asked what advice he would provide to students, he said it is surprising how people have become more open to learning from millennials in the workplace, so see that as an opportunity.  In terms of career management, you should let people know what you are interested in doing (they won’t read your mind) and take advantage of opportunities to show what you are good at.

On being a business leader, he said he never saw himself as a CEO.  He thinks it was a result of developing a passion to serve others, so he must see himself as a servant-leader.  Mader said what he has noticed about the best CEOs is they are good at making each employee comfortable and willing to speak up.

He was asked to explain a past failure and what he learned from it.  Mader said he spends little time looking backwards, but he recalled once “accepting a reality he shouldn’t have.”  The issue was about going up against Amazon to recruit tech workers in Seattle.  The conventional wisdom was you could not compete.  Instead, the attitude should have been let’s build a super-high-performance recruiting team!  When they made that commitment, they were able to overcome their recruiting problem, but he estimates they lost a year thinking they could not compete.

Another question was around what it is like to be the CEO of a public company (Smartsheet has been publicly traded since April 2018).  He responded that a change like that should not cause you to change your values and belief system.  He also commented on the increase in accountability that comes with being a public firm.  There are lots of owners, large and small, and delivering for them is a powerful driver.  Mader also talked about the importance of being able to “tell the story on the street.”  Working with the CFO, he has to be a storyteller for the company in front of the investment community.  What is the story behind the numbers for Smartsheet?

Because the format was heavy on Q&A, our students had the opportunity to learn from a highly regarded CEO across a broad range of topics!  And it’s not so common to be the CEO for 13 years at a company that is just coming off an Initial Public Offering, so Mark Mader has seen a lot and had a lot to share!

Albers' Master's in Business Analytics program teaches students how to tell the story behind the numbers. Check out how an MSBA makes you a valuable interpreter of data and how it shapes corporate strategy.

Joseph Phillips has served as Dean of the Albers School of Business and Economics at Seattle University since 2001. The school serves approximately 1,000 undergraduate and 500 graduate students. Albers is distinguished by its focus on student success, commitment to ethics and social responsibility, pursuit of academic excellence, strong ties with the Seattle business community, and emphasis on preparing values-driven leaders committed to contributing to the Common Good.