Everything you have heard about the traffic in Jakarta is true – but not at 1:00 AM in the morning when it took only 25 minutes to get from the airport to my hotel.  May 9 to 15 I took a trip to Jakarta to visit with SU alumni.  We have nearly 1000 alumni in Indonesia and most of them graduated from the Albers School, so I accompanied Jim Hembree from University Advancement on this trip to connect with our Jakarta alums.

Jim planned a variety of meetings with the alumni.  Some were one on one, some were small groups, and we had an evening reception where more than 40 alumni attended.  Altogether, we saw about 60 alumni.  They were an enthusiastic group and happy to see SU visiting Jakarta.  They are very appreciative of their SU education and reminisced about some of their favorite Albers faculty, such as Fiona Robertson, Bob Callahan, and Teresa Ling.  Fiona was super tough they said.  Bob Callahan’s business communications class was life changing.  Teresa Ling was their mother figure in Seattle.

Naturally, the Jakarta weather was not like Seattle’s this time of year.  The temperature was in the 90’s during the day and very humid.  Of course, much of our time was spent under air-conditioned conditions, either indoors or in air-conditioned cars.  One evening I decided to walk over to a reception and was told by the locals, “we don’t walk, we will drive you over,” but I decided the 20 minute walk needed to be part of my Jakarta experience!

Sunday mornings they close down Thamrin Road in the center of town to automobile traffic and let people walk, run, and bike.  We do the same thing to Lake Washington Boulevard on Sundays in the summer here in Seattle.  As you can see from the photo below, people take advantage of the opportunity! 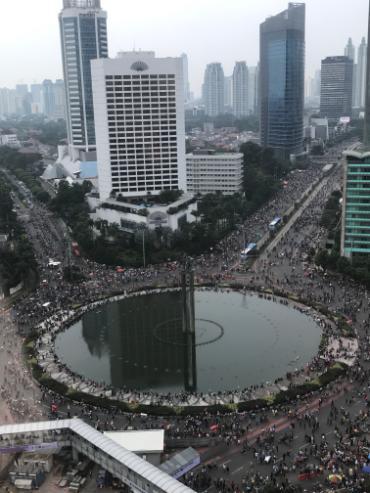 There is not much in the way of tourist activity in Jakarta.  For that sort of thing, people suggested going to Bali.  Jakarta’s President sees tourism as a potential economic driver for the nation, so he has initiated a number of new tourism projects, but I am assuming they are all outside Jakarta.

Right now there is political turmoil around the recent sentencing of Jakarta’s governor on blasphemy charges.  There were a number of political demonstrations by his supporters during our visit, but we did not see them up close.  Many people are worried that religion is being used for political purposes and are concerned about the implications for the 2019 presidential election.  They believe their democracy is at risk and the political freedoms that go with it.  Of course, religion has been used for political purposes in the US, so it is not surprising that it happens elsewhere.

We learned that Indonesian students thinking of studying abroad are not overly worried about the immigration drama created by the Trump administration, at least not yet.  Studying in the US is definitely something they are willing to consider, and when they do, Seattle is one of the more desirable locations for them.  Indonesians perceive that Seattle has less crime, is more tolerant, and has a larger Asian presence than most of the US.  Seattle also has a significant Indonesian community which makes it easier to think about locating to Seattle.

This was my first trip to Jakarta, and any time you go somewhere for the first time, it is an interesting trip because you cannot help but learn a lot!  It was also great to reconnect with our Jakarta alumni.  They are doing well professionally and very appreciative of their SU education!