On March 1st, Seattle University announced that Jim Sinegal, co-founder and long time CEO at Costco Wholesale, will join the Albers School as Senior Executive in Residence.  The announcement was made by Fr. Steve Sundborg at an Albers Executive Speaker Series event where Jim was speaking. 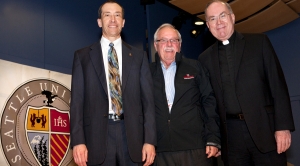 As Executive in Residence (EIR), Jim will have a profound effect on the education of our students.  He is one of the most admired executives in the world.  While he has reshaped retailing, his impact and reputation extend far beyond the retail sector.  The Costco way of doing business has valuable lessons for companies in all sectors.  As EIR, Jim will be a guest speaker in classes, speak to student clubs, provide seminars for faculty, mentor students, and maybe even teach a class!  There are many ways that he will be able to share his talents, insights, and wisdom with our students and faculty.  We are very excited to be able to work with him in this capacity!

So, just what is some of that wisdom that Jim can share with Albers students?  We got a taste of that March 1st from his presentation, "Costco: The First Thirty Years."  When asked what advice he would give to young people just starting out in their career, he stressed the importance of hard work and perseverance.  Success never comes without it.  He also encouraged students to find something you truly love doing, that way you never feel like you are going to work!

When asked about Wall Street analysts who criticize Costco for not raising prices and paying workers too much, he replied he did not want to complain, because Costco had high stock valuations, so obviously is not being punished by Wall Street.  He noted that analysts like to hear themselves talk and therefore have to have something to say, but he was never convinced they could run the business.

He was asked why other companies did not perform as well at Costco.  At first, he said he didn't want to comment about other companies because he always had his hands full at Costco.  But upon reflection, he noted two things - many companies get caught in a trap of focusing on quarterly earnings and trying to please Wall Street  rather than managing for long term success, and second, many companies lose focus and try to do too many things at once.  He advised picking a few important initiatives and focusing on those.

One student asked about Sarbanes-Oxley and the need to sign the quarterly financial statements.  Jim admitted that although he was an early critic of SOX, he believes that 90% of the legislation was beneficial.

Jim is always asked about China, and this event was no exception.  He replied that Costco believes it has many opportunities in its existing footprint and it makes more sense to pursue those rather than launch into a new market.  He also opined that China is a very difficult place to do business, and that Costco has real concerns about the rule of law and other aspects of China that affect Costco's ability to be successful there.

Jim was asked about the importance of culture in a business and how the current culture would be maintained at Costco now that he was no longer CEO. He replied that, "culture is not the most important thing, it is the only thing."  He said he was not concerned about being able to maintain the culture while current CEO Craig Jelinek is at the helm, since Craig has been at the company since the very early days.  After that, it may get more difficult, but it will be something for the company to pay attention to.

Finally, Jim was asked what is most critical to the success of the company going forward.  He said that the managers of the Costco warehouses (aka "stores") will be most critical to the success of company.  Each of those individuals has a very important job, and how well they perform shapes the performance of the company.  Given Costco's "pro-employee" reputation, it is not surprising that Jim boils down the continuing success of Costco to its people!

So, there you have it.  A taste of the wisdom Jim Sinegal will be offering to Albers students.  We are very grateful to him for his willingness to work with us as Senior EIR!  What a resource he will be!