June 8th marked the one year anniversary of the disappearance of Dr. Hildegard Hendrickson, retired faculty member of the Albers School.  While hiking to pick mushrooms, Hildegard disappeared and has not been found since, despite the efforts of many to find her.

Hildegard was a member of our faculty from 1967 to 1996 and during that time served as department chair and finance professor.  There were about 80 friends, colleagues, and former students in attendance.  It was a good opportunity to bring together two communities who were very important in Hildegard's life -- Seattle University and the Puget Sound Mycological Society.

The Puget Sound Mycological Society donated an apple tree to the university, along with a memorial plaque recognizing Hildegard.  The tree is planted just South of the Hunthausen Building.  Our ceremony started with Fr. Steve Sundborg, SJ, President of SU, blessing the tree.  FYI, the small tree already has four apples growing on it!

We then heard prepared remarks from representatives of SU and the Mycological Society.  Representing SU were Dr. John Eshelman, former Dean and Provost, and Dr. Rex Toh, retired Professor of Marketing.  They recounted several good Hildegard stories that everyone could relate to.

They were followed by the two representatives of the Mycological Society, Marian Maxwell, current president, and Ron Post, past president.  They wanted it known that Hildegard's teaching was not limited to SU, but she played a very influential teaching role in the society, becoming one of the leading mushroom experts in the organization and in the Puget Sound region.

Everyone used the same words to describe Hildegard -- honest, direct, reliable, caring, organized,...  Hildegard was a remarkable individual.  We all miss her very much.

Here is a picture of the apple tree: 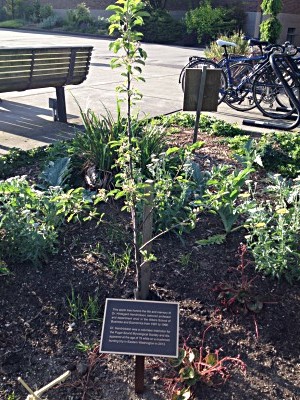