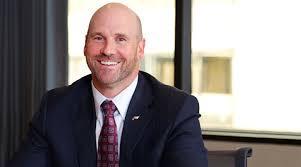 Jeff Musser, President and CEO of Expeditors International, was the speaker for the Albers Executive Speaker Series on May 23rd on the SU campus.  Musser was appointed CEO of Expeditors in 2013, after starting with the company as a part-time messenger in 1983.  He worked his way up through the organization, from District Manager, to Regional VP, to CIO before becoming CEO a few years ago.

Musser started off by explaining how the culture of Expeditors consists of nine factors – curiosity, pride, attitude, excellence, resolute, integrity, pride, sense of humor, and appearance.  He did not try to unpack each factor, but did note that “appearance” sometimes get people’s attention.  The company wants to project a professional appearance since they believe that provides a competitive advantage to them.  He noted that younger employees push back on the dress code, which means Expeditors needs to provide an explanation as to why appearance is considered important for success.  It is not something they will compromise.

He reminded the audience that Expeditors business-to-business model is a non-asset model.  They own no planes, ships, or trucks.  They believe there are more than enough of those assets available already.  While freight moving companies may overinvest in assets at certain points, in the long run the firms they partner with will need to get capacity right in order to be profitable.

Musser lamented that in this day and age people are not taking the time to engage and understand others.  Instead of trying to understand the other person’s point of view or why something is done in a particular way, we want to impose our perspective.  Via social media we are surrounding ourselves with people who view things as we do, thus creating our own “echo chamber” as it were.  He encouraged the audience to engage in more open dialogue to understand other points of view, which can be more powerful than simply exercising free speech.

As for leading and managing today’s workforce, Musser had several observations:

When asked about the success of Amazon.com, Musser expressed great admiration for the firm, and noted that unlike most companies who are trying to figure out what to outsource, Amazon seems determined to do everything on its own.  He also noted that whereas most large companies are rewarded for their profitability, right now Amazon is rewarded for growth.  At some point, that will shift and profitability will become the standard the company is measured by.  That shift may force Amazon to do more outsourcing and abandon some of its business lines.

Musser is very excited about what the Internet of Things means for the logistics industry.  With connected devices, the ability to track items second by second should result in significant improvements in customer service.  Periodic updates will be replaced by continuous tracking.  This also provides Expeditors with more data for improving performance and advising customers on logistics strategy.

Throughout the presentation, Musser showed himself to be a down to earth, humble, and earnest leader.  He definitely models the nine values that characterize the Expeditors culture.  He proved to be a first rate speaker for our students to hear from!