I had the chance to spend some time with Ciscoe last week when he was on the campus to give the keynote speech for a WAPPA (a membership organization serving those in educational facilities management) workshop for groundskeepers. The workshop was hosted our by own SU Facilities Operations with about 70 people from around the Northwest in attendance.

Ciscoe and I took some time before the workshop to walk the campus grounds and visit with some old friends; some human, some animal, some of the botanical variety.

For the few uninitiated, Ciscoe Morris, who is a well-recognized gardening expert and personality on television and radio, was also the Grounds and Landscaping Manager at Seattle University for 23 years.  His infectious enthusiasm and hilarious style of story telling are well loved by Northwesterners. But many people may not know that he has been a courageous and tireless fighter in the front lines of pesticide use reduction in the urban landscape. 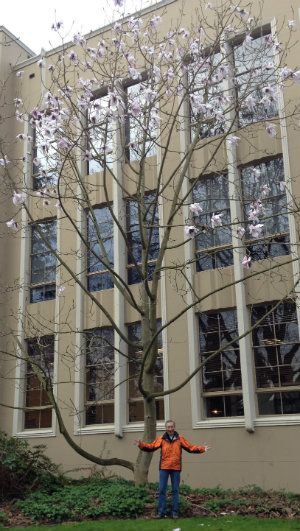 Back in the mid-1970s through the early 80s when Ciscoe first came to SU, it was common practice to spray pesticides and herbicides during the day when students were moving from class to class, without any regard for what was being sprayed or possible exposure from drift. Ciscoe knew intuitively that this wasn't right and immediately began to make changes in the safety procedures, authorizing only targeted sprays very, very early in the morning. He and the crew were never happy about being exposed to these chemicals and the four in the morning regime made the task all the more onerous. The numerous dead birds found on campus and the general feeling of "lack of life" was compelling evidence that things were not functioning well in the landscape.

So Ciscoe continued to search for a better way. The Master Gardener Program through WSU led him to his first Integrated Pest Management (IPM) workshop. IPM was a very new concept at the time. Ciscoe was the only non-farmer in attendance and the instructors questioned whether the approach would work in a landscape setting with so many different plant species to deal with.

But the concept of a systematic method of monitoring pests and then taking action in a specific, tiered approach, using the least toxic means first, was one that made so much sense to Ciscoe. The idea of the balance of nature, that beneficial insects and birds could keep pest species in check, was the bright new future of landscape management. It took persistence and persuasiveness to convince the administration at the time to agree to Ciscoe and his crew trying this new approach. Even in the face of what seemed like setbacks, Ciscoe never wavered. I asked him if his convictions had changed or softened through the years. He said that they have only grown stronger. The keen observations of a few pioneers of that time have now been backed up by years of research.

When I asked Ciscoe to recall something that he was particularly proud of doing at SU, he spoke of his efforts to save and move to more remote parts of campus the nests of Bald-faced Hornets. They are fierce hunters of insect pests and only bother humans when their nests are threatened. So this operation had to be done in the deep of night and with full protective gear. Facing down a hornet's nest is queasy business and moving one to safety requires steady nerves and an unswerving believe that all creatures play a vital part in the natural order of life on earth.  To my mind, that is true commitment.

We rounded the corner near the Union Green and caught sight of the Mallard duck pair, affectionately dubbed Harold and Maude.  They, perhaps their progeny, have been returning to campus for many springs to nest on the little island in the reflecting pool at St Ignatius Chapel. Ciscoe remembered them, years ago, nesting near the Chief Seattle statue in what used to be a pool near the Pigott west entrance.

Spring returns, and life goes on.