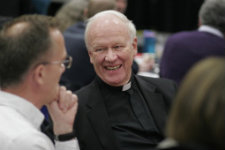 In case you missed it, Pat Howell, S.J., rector of the SU Jesuit community, has written a piece for the latest Conversations on Jesuit Higher Education. In his article, "The 'New' Jesuits: The Response of the Society of Jesus to Vatican II, 1962-2012: Some Alacrity, Some Resistance," Father Howell provides a wonderful overview and analysis of how the Second Vatican Council impacted the Jesuits and redefined their mission. The fall 2012 Conversations focuses on the 50th anniversary of Vatican II. We all should have received a hard copy of the magazine. For the electronically inclined, Father Howell's article and all the others can be downloaded at Conversations. It should be noted that Father Howell is not only a contributor but he also chair of the National Seminar on Jesuit Higher Education, which publishes Conversations.

Seattle University is marking the 50th anniversary of the Second Vatican Council by devoting its Catholic Heritage Lecture Series to the topic.