Father Arturo Sosa was elected Superior General of the Jesuits at General Congregation 36 earlier this month in Rome.

Father Arturo Sosa Abascal was elected Superior General of the Society of Jesus-or the Jesuits-at General Congregation 36 (GC36) on Oct. 14 in Rome. Father Sosa succeeds Adolfo Nicolás, S.J., of Spain, who announced his intention to resign in 2014, having served as Superior General since 2008. 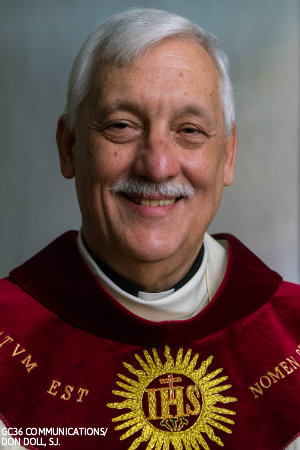 Hailing from Venezuela, Father Sosa is the first General Superior to be born outside of Europe. Prior to his appointment as provincial, he was in charge of the social apostolate of the Jesuits in Venezuela, which includes the Jesuit network of schools for the poor, Fe y Alegría. He was also head of the Centro Gumilla, the Jesuit-run social and action research center.

Among his distinguished academic posts, he has served as a member of the founding board of the Andrés Bello Catholic University in Caracas and rector of the Catholic University of Táchira. He has taught and researched political science in many different institutes and colleges, and in 2004 was a visiting professor at the Latin-American Studies Center of Georgetown University.

Two years ago Father Nicolás appointed him as the delegate (equivalent to Provincial) of all the Roman Houses-the Gregorian, the Orientale, the Biblicum and the residences.

Father Patrick Howell, S.J., Distinguished Professor of SU's Institute for Catholic Thought and Culture, remembers Father Sosa from General Congregation 34, at which they both, as well as SU President Stephen Sundborg, S.J., served as delegates.

"I don't recall any conversation with him," Father Howell says of Father Sosa, "but he endeared me to himself when at the end of the Congregation, he rose and thanked the members of the task force which had brought forward the issues related to women in the church and civil society. That was one of the two task forces that I served on, and I had a hand in writing certain key paragraphs, which was published as Decree 14 'Jesuits and the Situation of Women in Church and Civil Society.'"

Father Howell remembers Father Sosa at first not being in favor of considering the decree. But as Father Sosa said at the time, "(A)s the document was presented and we thoroughly discussed the underlying issues-abuse, the sex trade, the discrimination of women in so many ways, I came to believe that this is one of the most important documents of the Congregation. And I will be taking it back to Venezuela to implement its vision. It is a major justice issue for us in our day."

Since GC34, Father Howell took note of Father Sosa's work in the society and the high esteem in which he was held by Father Nicolás and other Jesuits in Rome. "I had a couple of Jesuit friends in Rome who clearly hoped that Father Sosa might be the new general," says Father Howell. "He was known as a good listener, astutely aware of all the ecclesial politics in Rome, a keen strategist and with great sensitivities for the future of the Church. He is a man of wide-ranging experiences as a Jesuit and has a natural personable presence. 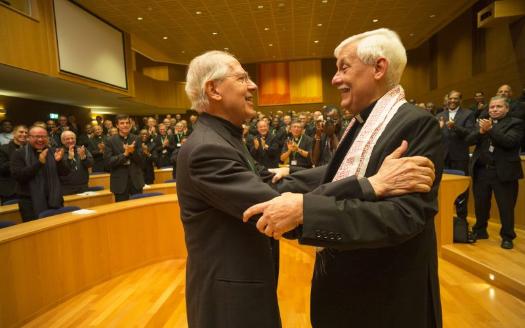 "A former provincial, he is fluent in English, Italian and Spanish-practically prerequisites for any provincial. And St. Ignatius would underscore the desirability of a man of spiritual depth and sharp intelligence."

Father Sosa was elected following a process involving more than 200 delegates representing 62 countries. The delegates representing the Oregon Province-of which we are still a part until we join the California Province for a new Jesuits West Province in 2017-were Provincial Scott Santarosa, S.J., and Tom Lamanna, S.J., superior of the Jesuit Community at Bellarmine Preparatory School in Tacoma.

"Fr. Sosa strikes me as a man who is imminently comfortable in his skin, as easy to be around as your next door neighbor, and whose way of being immediately puts you at ease," said Father Santarosa. "His smile is warm and friendly, and he is always quick with a word of humor at meals or in the hallway. When I approached him to congratulate him, I said, 'Felicidades, Padre General!' to which he responded, '¡Todavía no me aplasta!' a humorous way of saying, 'It hasn't broken me yet!' Of course, he had only been named Superior General a few short minutes beforehand!

"I enjoyed seeing him in action just a few days after the election. After all of the ceremony of the weekend, he just went to work and the rest of us didn't make a big deal about him anymore. He recognizes that this role, like any of our Jesuit roles, is about service. We don't aim for the limelight, but are most comfortable when we are working. This is clearly who Arturo Sosa is-most comfortable working, serving."

In an interview at GC 36 before the election, Fr. Sosa said delegates come from different countries, but they share a common culture linked to their experience of the Ignatian spiritual exercises and practices of discernment. "We have a long tradition and a strong desire to listen to the same voice; that is the voice of the Holy Spirit."