Putting the Care into Health Care 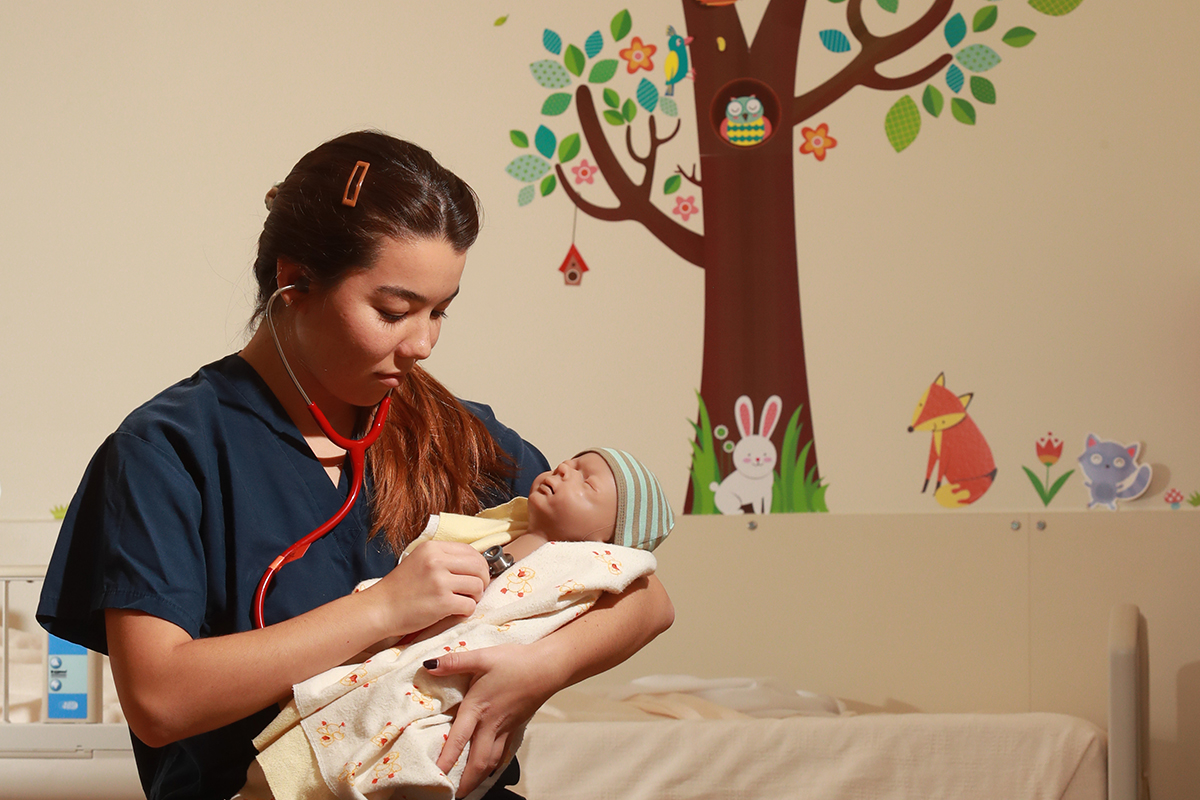 CPL lab technician Casey Feeney, '20, checks the vitals of one of the baby simulators that replicates a real patient.

An infant patient slowly wakes up from a nap and acclimates to the room with eyes blinking and legs kicking. A health care professional leans over the crib and speaks soothingly to the baby when he begins to cry in a rhythmic and repetitive pattern. If you’re familiar with a tiny human’s distinctive movements and sounds, observing this scenario with a life-like infant simulator can be a bit surreal. But these technologically advanced simulators are proving vital in the teaching labs for student nurses.

Such is the case with the College of Nursing’s Clinical Performance Lab (CPL). Backed by substantial support from donors and community partners, the CPL has provided cutting edge training for future nurses since 2005. In 2019, the CPL announced the happy news that through the generosity of two new donors, its “family” of life-like simulators grew—now to five—with the arrival of the world’s most advanced high-fidelity neonatal patient simulator.

“We know from scientific literature that simulation is an incredible bridge between theory and clinical practice,” says Dr. Carrie Miller, CPL director and assistant professor at the College of Nursing. “It is a teaching modality that allows our students to practice in a very safe, standardized and structured environment. We want them to learn in a realistic environment and then go out into the clinical environment and be safe practitioners.”

The terms “high” or “low” fidelity indicates how life-like the simulator—or manikin—is. A high-fidelity manikin blinks, speaks, reacts and creates facial expressions. The donated infant model—branded by Gaumard® Scientific Company as Baby Tory®—is also capable of producing all manner of fluids that a human baby does.

“Baby Tory® can provide immediate feedback in the form of physiologic data, such as labored breathing, and emotional indicators of comfort or distress,” says Dean and Professor Kristen M. Swanson.

“A big part of simulation is creating as realistic of a human experience and interaction as possible. This allows students to insert themselves into a believable situation,” says Zoe Haywood, CPL operations coordinator.

Following extensive off-site training and conferences, a lab tech operates the simulator from a control room with a one-way mirror. The infant manikin is hooked up to vitals and monitors to provide live reactions, so “students are seeing how their actions affect the baby, instead of just playing pretend with a doll,” says Haywood.

To simply describe the idea of simulation, Haywood likes to apply a sports analogy. “Consider lecture classes within CPL as drills or scrimmages. You can lose during a scrimmage but it’s okay—just like how a mistake can be made on a sim but everything is fine,” she says. However, once a student moves on to a clinical environment with real patients, “that’s the equivalent of a real game” with much on the line.

Every student enrolled in the College of Nursing passes through the CPL’s doors, located near campus within James Tower at Swedish Cherry Hill Medical Center, which translates to approximately 400 learning opportunities per week. Different scenarios are created that mimic real-life clinical settings, like a school nurse’s office in the pediatric suite, and manikins are assigned varying identities, which in turn enhances the realism of simulated learning.

ASSESS & ADDRESSS THE SITUATION
Per the standards of best practices, students arrive in scrubs and are prepped for the simulated case they’re about to enact.

The most common complication seen in newborns is respiratory distress. “This is something we absolutely cover in simulation,” says Miller. With the help of the simulator tech, students learn how to not only respond, but also how to manage the problem and to recognize future complications of respiratory distress, such as cardiac issues.

Students also train in the art of effective communication by mastering the people skills necessary to interact with parents of newborns, medical providers and health care team members. Other training topics include administering medication, what types of side effects to look for and why particular medications are used.

INSPIRED GENEROSITY
The new baby simulator was made possible by Jim and Rose Kilpatrick, a Portland, Ore.-based couple with ties to the College of Nursing.

The Kilpatricks’ gift will allow “undergraduate and graduate nursing students to have the experience of learning how to care for a sick baby before they go into practice,” says Miller. “We are incredibly indebted to their generosity.”

The couple’s inspiration to give to the College of Nursing derives from a particularly distressing personal experience. “We have four children and when they were very young, our family went through a trying time when our oldest had a traumatic illness at eight years old,” says Jim. “We spent a few scary months in a very caring children’s hospital in Portland. That remains a defining event in our lives.”

One of their children, Katie Kilpatrick, 18’, graduated from the College of Nursing and is now employed by Seattle Children’s Hospital. “There’s a special place in our hearts for the people that deliver pediatric care to families at their most vulnerable time,” says Rose. “We are very proud of our daughter for wanting to be one of those people.”

Knowing the College of Nursing has been educating students for more than 80 years, consider how far medical care has come over the course of eight decades. Because such advancements are ongoing, keeping Seattle U nursing students ahead of the curve and beyond what has been traditionally provided requires an investment. The college describes the role of private support as “a social purpose that serves the greater good.”

“Seattle U is sculpting the future nurses that will be delivering pivotal care,” says Jim. “We thought, ‘how cool would it be if our financial support can impact a generation of future nurses for years to come?’ Working with Dr. Carrie Miller and Dean Kristen Swanson, we found a way to improve their readiness with today’s best technology.”

SHOWERED WITH SUPPORT
Just as a new baby is traditionally welcomed into a family through a celebration, the CPL team hosted a baby shower to celebrate theirs (all gifts were donated to local nonprofit, Mary’s Place).

“We have a deep respect for those that participate in student learning and our manikins participate heavily, so we had a baby shower in honor of Nino,” says Miller. The infant was officially named by Rose and Jim—in memory of Rose’s father, Nino—and announced during the shower in late October.

The lab’s first baby shower was in 2017 following a tragic loss for the lab team. “Most of our simulator manikins are from Gaumard® Scientific Company,” explains Miller. At the time, the lab had been working closely with a sales representative named Mark who was in frequent communication to help the CPL with Gaumard® Victoria®, a new birthing sim that the lab named Connie.

“But Mark died suddenly of natural causes in the middle of getting Victoria® set up and incorporating her into our family. His death was a shock to us all.”

CPL staff contacted Gaumard® headquarters in Texas and discussed their interest in honoring Mark, which led to inviting his family to the lab’s first baby shower. During the gathering, Connie gave birth to her infant, which the CPL team named Mark.

“I think in many ways it was a celebration of life for our rep, Mark,” Miller recalls. “His mother was in attendance and the simulated birth was a powerful moment for her to experience.”

AN INNOVATIVE VISION
In 2003, the Sinegal Family Foundation, established by Jim and Janet Sinegal, made a leadership gift to establish the Clinical Performance Lab. Additionally, in 2015 Dave Sabey made a significant donation to the CPL in support of the future of health care innovation. These foundational contributions, and those of recent donors, have made this cutting edge nursing laboratory a reality at Seattle U.

The lab itself is a major draw for prospective students and the new infant sim certainly helps reinforce Seattle U’s reputation for innovation. Says Haywood, “the College of Nursing offers amazing resources that a lot of schools in this area don’t necessarily have.”

Each purchase of a manikin requires a significant amount of meetings, fundraising and communication because of their significant expense.

“We have a tremendous respect for all of our community partners, because they support health education and our nursing students so they can go out and be the best nurses they can be,” says Miller.

20,000
The square footage within the Clinical Performance Lab

6
The different academic programs offered through the CON, along with many specialty areas within the DNP and Post-Grad Certificate programs. Learn more here.

CELEBRATE NATIONAL NURSES WEEK AT THE CPL
During National Nurses Week in May 2020, the College of Nursing plans to celebrate the 15th anniversary of the Clinical Performance Lab, in which community members will be invited to come and see how their funds have been used within the lab.