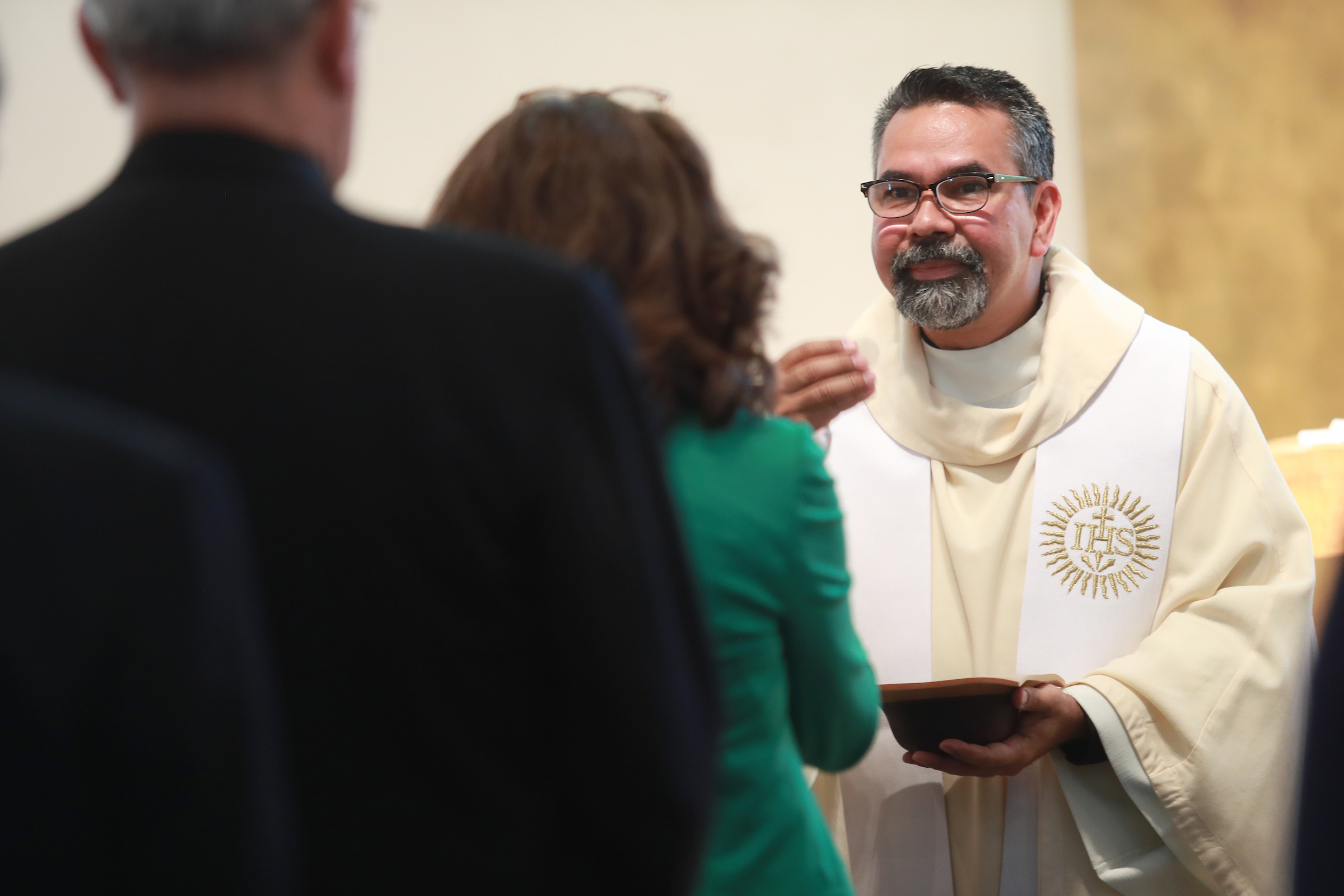 Arturo Araujo, S.J., was installed as rector of Seattle University's Jesuits on Sept. 17, the Feast of Robert Bellarmine, S.J.

When Arturo Araujo, S.J., arrived at Seattle U in August to begin his six-year term as rector, he returned to a familiar place that was once his academic home. Born in Colombia, Father Araujo first came to SU in the early 2000s to pursue a bachelor’s degree in visual arts.

As was the case with his predecessor Father Tom Lucas, who concluded his term as rector this summer, Father Araujo comes to SU from the University of San Francisco, where he served as associate professor.

An accomplished artist, Father Araujo’s works has been shown internationally, including in Colombia, the U.S., Mexico and Canada. In addition to his duties as rector, he will serve as an associate professor in the Department of Art and Art History. He is also a member of the university’s board of trustees and will take on some priestly responsibilities with the archdiocese.

A few days before his formal installation as rector on Sept. 17, Father Araujo discussed his journey so far as a Jesuit and an artist, what he believes to be the most important aspects of serving as rector and (much) more.

The Commons: If we could back up a bit, how did you wind up at Seattle University as a student?

Father Araujo: In 1998, the Colombia Province created a twinning agreement of mutual collaboration and support with the former Oregon Province (which has since joined with what was formerly known as the California Province to create Jesuits West). And I was one of the guys who were sent here to get a degree in what we call “special studies.” So I came here to study Fine Arts, which was my dream at that time.

The Commons: Why Seattle U—what drew you here, specifically?

Father Araujo: I chose Seattle U because of the artwork coming out of the studios—that was very important to me. The other (reason I chose SU) was Seattle, which is such a hub of culture and national and international art, and the Northwest, which is such a beautiful place to be—you feel whole by nature here.

The Commons: Did you have any formal training in the arts before you came here as a student?

Father Araujo: No, I was an amateur artist. That’s why the Colombia Province sent me here—to get the credentials I needed to go back and teach there.

The Commons: You didn’t go back, though…

Father Araujo: No, I go back to visit family and collaborate on artistic projects, but this is my home.

After Seattle U, I went to Cornish College and earned a BFA. At that time, I had to make a choice—go back to my home country or stay. The conditions were not right for me to go back there and teach art, so in dialogue with the Colombia Province, I decided to stay in the U.S. I received a fellowship from the University of New Mexico, which was then ranked #5 in the nation for specific area of print-making, so it was a great honor. After I earned my MFA, I started working for USF. And then eight years later, the provincial asked me to come back here.

The Commons: How does that work, the process of being appointed rector—do you throw your hat in the ring and express interest in the position, or do you just get a tap on the shoulder and they say, Pack your bags, you’re going to Seattle U for the next six years?

Father Araujo: (In the Society of Jesus), we don’t campaign for jobs. Promoting yourself is actually an impediment to getting a job. We’re brothers, and as brothers we do not compete for these jobs. The provincial superior asks us if we are available, and you say, “yes.” That’s the vow of obedience.

The Commons: What was going through your mind when you were asked to take on this role?

Father Araujo: First, I felt honored—it’s a vote of confidence and a recognition of the leadership qualities that God gave me. If I can do something for my brothers, then why not?

That comes with some sacrifices, of course: leaving San Francisco, which was home for me, leaving my friends, all the professional connections I had built. But there is something greater, and that’s the promise that we Jesuits believe in, and the promise is coming when I say “yes.” I’m not afraid of what is coming. I embrace it. With joy. And it’s an advantage that I was already here before, and I had such a positive experience at Seattle U. Coming here from abroad and being received here with generosity by my brothers, by lay people, by parish people, by university colleagues—it was such a beautiful experience.

The Commons: Clearly the university has changed a lot since your first stint here. How noticeable have the changes been to you?

Father Araujo: This university has grown exponentially in the past 13 years that I’ve been away. It was a good university before, and now it’s better.

The Commons: As for the role of rector, how would you describe the duties that are assigned—or unassigned, as the case may be?

Father Araujo: That’s a good question—I’m still trying to understand the role myself (laughs)! I will answer in a simple way: The rector of a Jesuit community is called to be a priest for his brother priests. I am available to my brothers. As St. Augustine once said, “Among you, I am one more brother; for you, I will be a bishop.” And I think that’s my understanding (for this position)—among my brothers, I am one more, I am no different; for my brothers, I will be rector. It doesn’t mean I have power over them; it means my authority is coming out of service.

The Commons: When you think of the rectors who have served the Jesuit communities of which you’ve been a part over the years, what attributes have you most valued and appreciated? 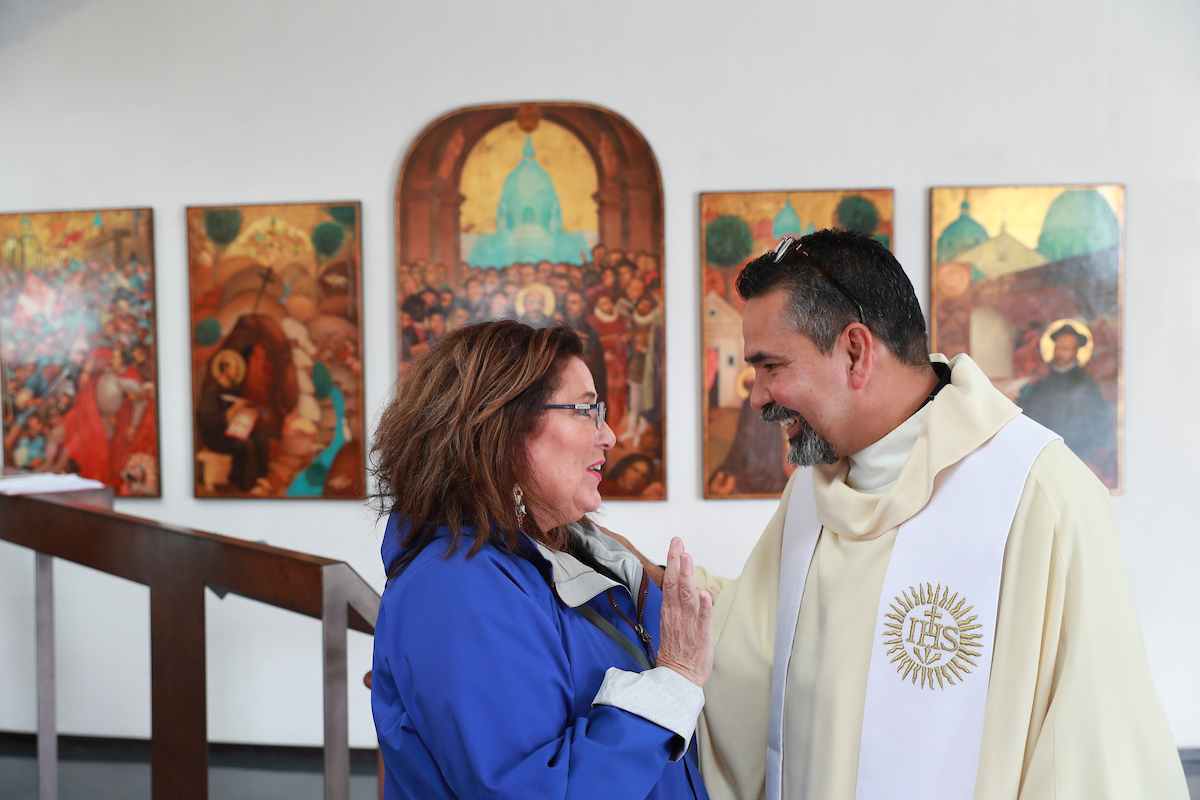 The Commons: Can you talk about your role as a professor, an educator?

Father Araujo: We have a power of influencing peoples’ lives in the classroom. We have an opportunity that is very unique, that is transformative, generative of culture and life. It is so honorable. If there’s one thing I miss from USF, it’s the classroom—I will have one class here—that everyday adventure of being among this young generation. They are so inspiring for me, so challenging, and I wish that all teachers have the same experience. And our teachers have so much to share from their own fields, but as well, from their own lives. An education is not just about instructing; it’s about sharing. And in that way we can learn so much from our students. That’s why I think education is so energetic—because you are a learner, not just a teacher.

The Commons: Let’s rewind. How did you come to the decision to join the Jesuits?

Father Araujo: I was 15 years old when I first felt the call of God to this. I was a student in a Jesuit high school, St. Joseph in Barranquilla, my home city, and we were taking a retreat. And during that retreat I had a deep spiritual experience of God in my life, calling me to follow Him.

You know, during all my formation as a Jesuit, I had many questions about faith and many questions about life and vocation, but when I go back to my own history, I cannot have a doubt about that event, that single event that transformed my life forever. I have many uncertainties in my life but (my calling) is my foundation and when I feel shaken, I have to go back to that experience in my home city, that beautiful sunset over the silver ocean. And the ocean started living within me for a second which became an eternity. How do you explain that—the exchange of emotions? It’s like explaining why you fall in love. You cannot explain that; you live it.

The Commons: Can you talk about how you got into the arts and your journey as an artist?

Father Araujo: I started as a classic dancer when I was eight years old, and then for a long time I was into theater. And then Fine Arts came along, and it fascinated me, 2D stuff—painting, drawing. So I’ve been doing artistic things for as long as I can remember. Then I came here and my first class was print-making, and that was a fascinating experience. It redirected my vocation in the arts. The first class I took (at SU) was something I had no idea existed and that was the ability to replicate images through mechanical matrices—wood block, etching, lithography, silkscreen—all that stuff; I loved it. And that was my first class! And it became my area of expertise.

The Commons: What project has brought you the most fulfillment?

Father Araujo: There was a project I worked on at Gonzaga Prep in Spokane when I was in my last year of studies at Cornish College. They needed a stained glass window for the new Chapel of the Three Companions they were building, and one of my professors at Cornish told me I should apply. To be honest, my application was okay—I was not really into it—but then they called me and there were interviews. I learned they were not looking for a designer of just one window; they were looking for four windows—each nine feet tall by 18 feet long.

Father Araujo: Huge. And I said, “Yes!” I like to take risks, it always ends up well. That project took me three years to complete. It gave me deep satisfaction. The topic was the Spiritual Exercises of St. Ignatius—engrave and etch in glass.

I did the designs in a studio in Seattle, then I shipped the models to the company that actually etched the image into the glass. They used hydrofluoric acid, which eats carbon molecules in the glass and starts etching the glass. The challenge of the project was to etch both sides of the glass—so one part of the image is engraved on one side and the other part of the image is engraved on the other side. My intuition was that by separating areas of the same drawing in this way, light would interact differently and create light spectrums on the floor. So different times of the year, you will be able to see how light is shifted in different ways. And that happened. We pushed the boundaries of that technique.

The Commons: I know you don’t have much spare time, but besides your artistic endeavors, what do you like to do—do you watch any reality shows?

Father Araujo: (Laughs) I used to. I have a TV but haven’t even plugged it in…but I will, I think. I love to watch some Netflix series for entertainment or instruction. Movies—I saw the last one by Tarantino. It was okay—same old stuff. I think he’s got to come up with something new.

The Commons: You heard it here, Quentin—time to up your game!