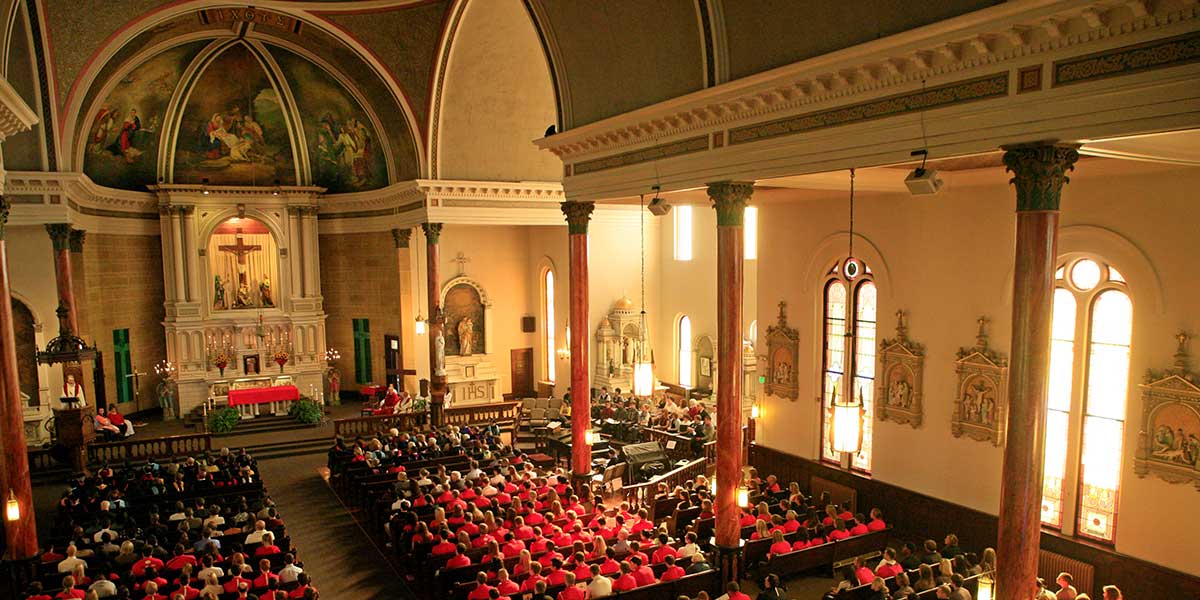 Sister Jean Schmidt and Father Rob Hagan got a lot of attention in the national media during the NCAA Final Four tournament. Both showed us a distinctively Catholic way of engaging with sport as an aspect of culture.

Sr. Jean Schmidt and Fr. Rob Hagan have been getting a lot of attention these days in the national media.  They are the chaplains for the two Catholic teams, Loyola of Chicago and Villanova, playing in the Final Four of the NCAA men’s basketball tournament this weekend.  It would be possible in a celebrity mad culture that tends to see human beings as having value to the extent they are winners, to regard Sr. Jean and Fr. Rob as simply having the luck of the Irish.  That is, to conclude that they are getting their fifteen minutes of fame because they are attached to winning basketball programs.

However, they matter far more than that.

One of the things they are doing is showing us a distinctively Catholic way of engaging with sport as an aspect of culture.  This is characterized by what some have described as the Catholic “and”.  In this case, they are reminding us that both faith and culture are important.   With regard to culture, they are heirs of a tradition that has tended to accept play and take it seriously intellectually.  Thomas Aquinas asked in his Summa Theologica if there can be a virtue about games and he answered “Yes”.  For Thomas, virtue had to do with moderation and therefore a person should not be working all the time.  A fully human life also needed time for recreation and relaxation, which is what play and games provided.  This ethic has influenced Catholic cultural and educational traditions right up to our own time.

Sr. Jean and Fr. Rob love basketball, and they are clearly happy to be walking with young people as they play the game.

But they are also, in their very persons, a reminder to these young people that there is more to life than basketball. Before the national championship game Villanova played in 2016, Fr. Rob told the players that “The whole world thinks this is just about basketball. We know our lives are more than what the world tells us is important.”  He encouraged the team to stay humble and “stay connected to the one who truly strengthens us.  Stay connected to each other.”  A few hours later, after Villanova had won the national championship, Fr. Rob brought them back to the same theme.  “Don’t go off on your own now,” he said. “Stay humble”.  In his book Attitude, Jay Wright says he picked right up where Fr. Rob left off.  “Stay humble,” he repeated.  “And one more thing.  Don’t let this define you. This can’t be the best thing you do in your life.  It’s just a basketball game.  To everybody else it’s huge, but you’ve got to be a good man, a good husband a good father.  Don’t forget that.”

The institutional character of Catholicism helps the faith dimension to be sustained and keeps it from collapsing into the value orientations of American culture at a particular moment. Sr. Jean and Fr. Rob’s vocations connect them to a faith community that spans two millennia and extends around the globe.  (Only 7 % of Catholics live in the United States.)  This is a tradition that has its own embodied rituals and its own history of theological and spiritual reflection.

When Henry VIII declared himself the head of the church in England in 1534, he opened the door to a new way of identifying the church with the nation state and particular cultural traditions.  In the United States we have continued with those tendencies, in referring to ourselves as a “city on a hill” and in notions of Manifest Destiny.  More recently, many Christians have supported an “America First” agenda and elected Donald Trump president.

With respect to sport, religious studies scholars have written a great deal about sport itself having become a folk or civil religion in the United States. This religion is an expression of “the American way of life” which places a high value on success.  Theologians have also criticized what they call “Sportianity” associated with some Evangelical Protestant traditions, which values winning more than genuine Christian values.

When their teams and fans arrive in San Antonio this weekend, Sr. Jean and Fr. Rob will be participating in all the rituals associated with the Final Four. But I can assure you they will also be participating along with many players and fans from their universities in other rituals they know are even more important, in memory of Jesus – the one who laid down his life out of love for his friends and invites us to love one another. He even promises us that living in this way this will lead to a joy that goes beyond winning a national championship.

Now that is good news.  And that is what the lives of Sr. Jean and Fr. Rob are a reminder of to the young people on their teams – and to all of us.