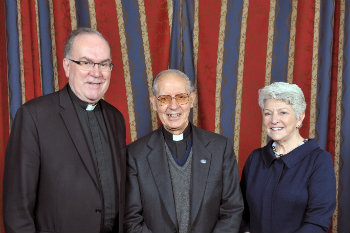 Adolfo Nicolás, S.J., superior general of the Society of Jesus, met last month in Chicago with the presidents and board chairs of all 28 Jesuit colleges and universities in the United States, as well as the nation's nine provincials and several rectors. SU's President Stephen Sundborg, S.J., who was part of this unprecedented meeting and also chairs the board of directors of the Association of Jesuit Colleges and Universities, is pictured here with Father Nicolás and Betty Woods, chair of the SU Board of Trustees.

Father Sundborg called the meeting "an amazing kind of gathering." He was particularly struck by Father Nicolás' encouragement to change the way in which we relate to today's students and, paraphrasing the superior general, to use "a new language" that is "less explicitly religious" and "more of a wisdom language" so that "we can convert students to their humanity…and the depth of who they are."

The full text of the superior general's remarks is now available at America magazine.

(Photo courtesy of the Association of Jesuit Colleges and Universities)