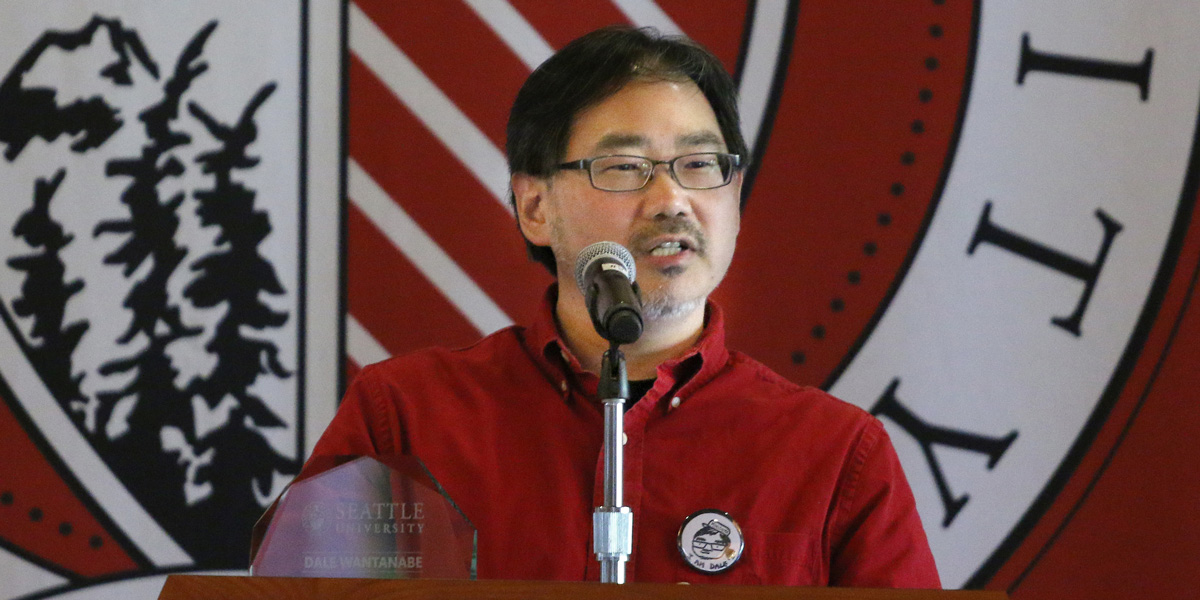 Dale Watanabe and Heather Reis Fike were announced as recipients of the 2017 Exemplary Staff Awards at Seattle University’s Faculty and Staff Appreciation Event on May 26.

Watanabe, assistant director of the International Student Center, received the Excellence in Leadership award, and Reis Fike, assistant to the dean in the College of Arts and Sciences, received the Lee Thurber Award.

Also honored at the event was Dave Leigh, S.J. (right), who President Stephen Sundborg, S.J., previously announced as the 2017 recipient of James B. McGoldrick, S.J., Fellowship, the highest award the university confers on a faculty member.

In nominating Father Leigh for the fellowship, English Department Chair Maria Bullon Fernandez catalogued his many contributions as a teacher, scholar, administrator and volunteer before concluding: “(A)ny colleague who knows him, and most members of our campus community do, will attest to Fr. Leigh’s essential humanity, his warmth, and his sense of collegiality.”

“I cannot think of a more fitting recipient, either in general or as the first Jesuit to receive this recognition,” echoed Arts and Sciences Dean David Powers.

In nominating Watanabe (left) for the Excellence in Leadership award, Kimberly Caluza, director of Counseling and Psychology Services, wrote: “Dale has fostered a welcoming environment and sense of community for hundreds of international students, who choose to study at Seattle University each year. Not only does Dale create a sense of hospitality and home for international students, he is also often regarded as a family member by many of the students, who refer to him as ‘Uncle Dale’ or as a ‘second Dad,’ because of his genuinely caring interactions with students.”

Caluza was joined by 16 other nominators—students, alumni, faculty and staff—who wrote in on behalf of Watanabe. It was noted that their total number of 17 matched the number of years Watanabe has been at Seattle U. Many nominators also spoke of Watanabe’s service at SU and in the community, particularly the annual Day of Remembrance and Minidoka Pilgrimage, which bring attention to the Japanese internment and other actions still being taken against marginalized peoples.

In accepting his award, Watanabe spoke movingly of his own family being interned. “When the government came for my family, people were silent. It is my hope that we will not be silent when we see injustice today.”

The praise was similarly effusive for Reis Fike (right), whose Lee Thurber Award is named for the longtime assistant of former President William Sullivan, S.J. Nominators spoke to how highly respected Reis Fike is within the College of Arts and Sciences, her strong work ethic and humility, and her visionary leadership in advancing shared governance, including her work as founding vice president for the Arts and Sciences Faculty Senate.

“Heather makes contributions that support and serve the mission, vision and values of the university and its strategic priorities,” Dean Powers wrote in nominating Reis Fike with several other colleagues. “She demonstrates exemplary work behaviors, leadership, and commitment to excellence and inspires others (myself certainly included) to excel. In how she treats others around her, she demonstrates awareness and appreciation of individual differences, promotes inclusiveness and collaboration, treats others with respect and dignity and recognizes the unique importance of all persons. With roots deep in the mission and accomplishments reaching the sky, Heather Reis Fike is a foundational member of our community and a humble and exemplary staff leader for the university.”

At the appreciation event in Campion Ballroom, Reis Fike recalled that 18 years earlier as an undergraduate—a “low-income, first-in-my-family-to-go-to-college teenager”—she was in the very same venue listening to Nelson Mandela speak. “It was a once-in-a-lifetime moment, and just one of many that made me fall in love with SU, academia and living a life dedicated to social justice.”