Art is All Around Us

Art has long been a part of campus life at Seattle University. Beginning with the murals and other works in the original Garrand Building, to the sculptural and visual arts that dot the campus grounds and the walls inside the different colleges and schools, SU’s art reflects its Jesuit and Catholic heritage, ethos and broad cultural values.

The original A. A. Lemieux Library, which opened in the mid-1960s, incorporated a significant collection of original art by Pacific Northwest artists, including work by SU faculty members Val Laigo and Nick Damascus. In the 1970s, university friends Robert and Miriam Kinsey contributed a large collection of Japanese netsuke (miniature sculpture) and prints still visible on campus today. In subsequent decades, the opening of Sullivan Hall (1998), the Student Center (2002) and the new Lemieux Library and McGoldrick Learning Commons (2010) each occasioned magnificent gifts of art and funding for art acquisitions.

“The construction of the Chapel of St. Ignatius—in and of itself a major work of architectural art—made use of an Art and Furnishings Committee and raised the bar to a new level for art collecting on campus,” says Josef Venker, S.J., assistant professor of visual art and since 2020 curator of what has become known as the Seattle University Permanent Art Collection (SUPAC).

Since then, “a concerted effort has been made to include significant art in most new buildings on campus,” says Venker.

Take a casual stroll through campus and you’ll see art inside and outside the buildings, such as prominent sculptural work at the library or striking paintings of George Floyd and Breonna Taylor by David Teichner on the first floor of the Student Center.

Some of the latest additions to the campus art story are inside the Jim and Janet Sinegal Center for Science and Innovation. 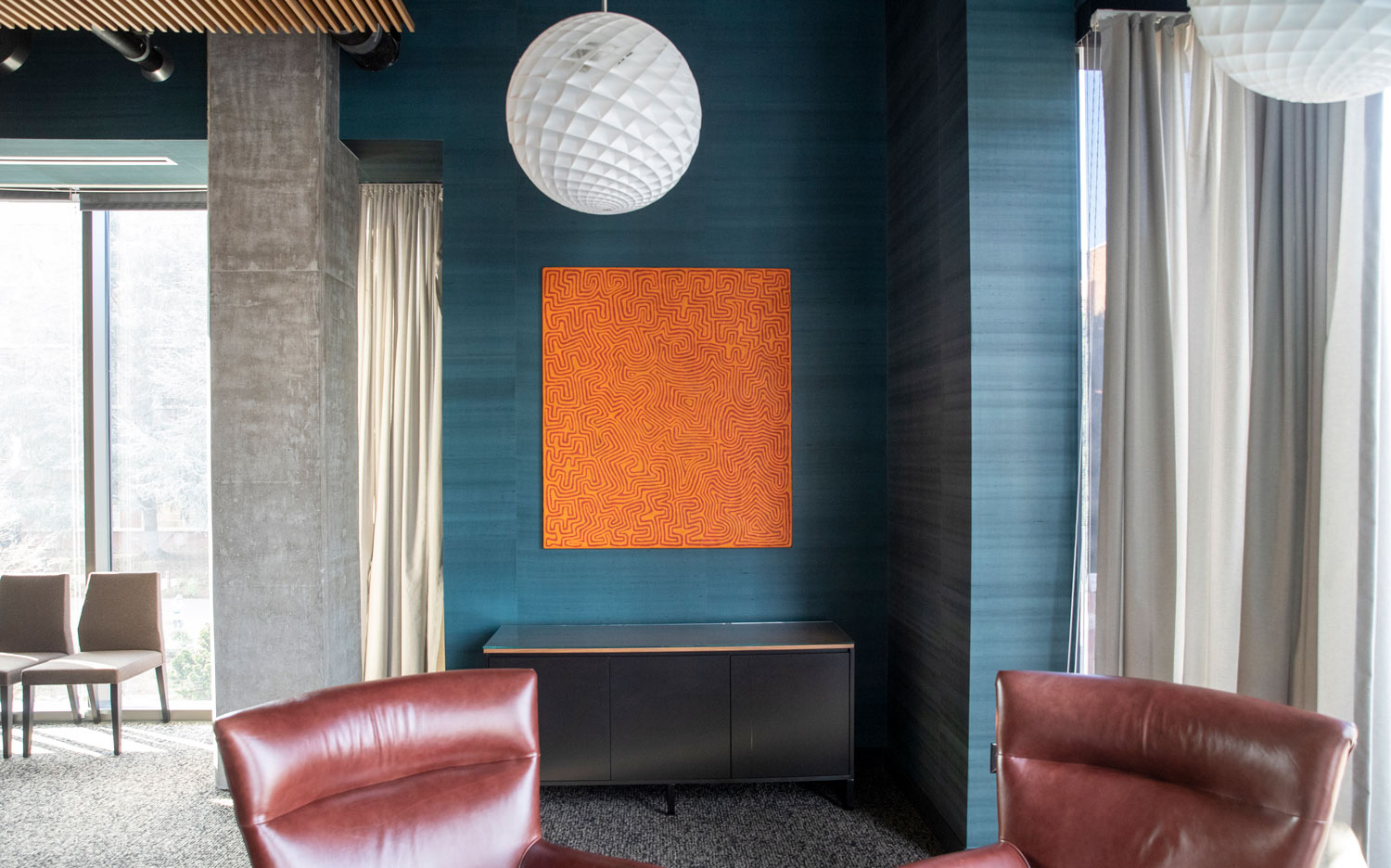 An Indigenous Australian of the Pintupi language group, Tjampitjinpa was born circa 1943 near Muyinnga, Western Australia. Painted at Kintore, this work depicts designs associated with a Water Dreaming at the soakage water site of Malparingya in Western Australia. 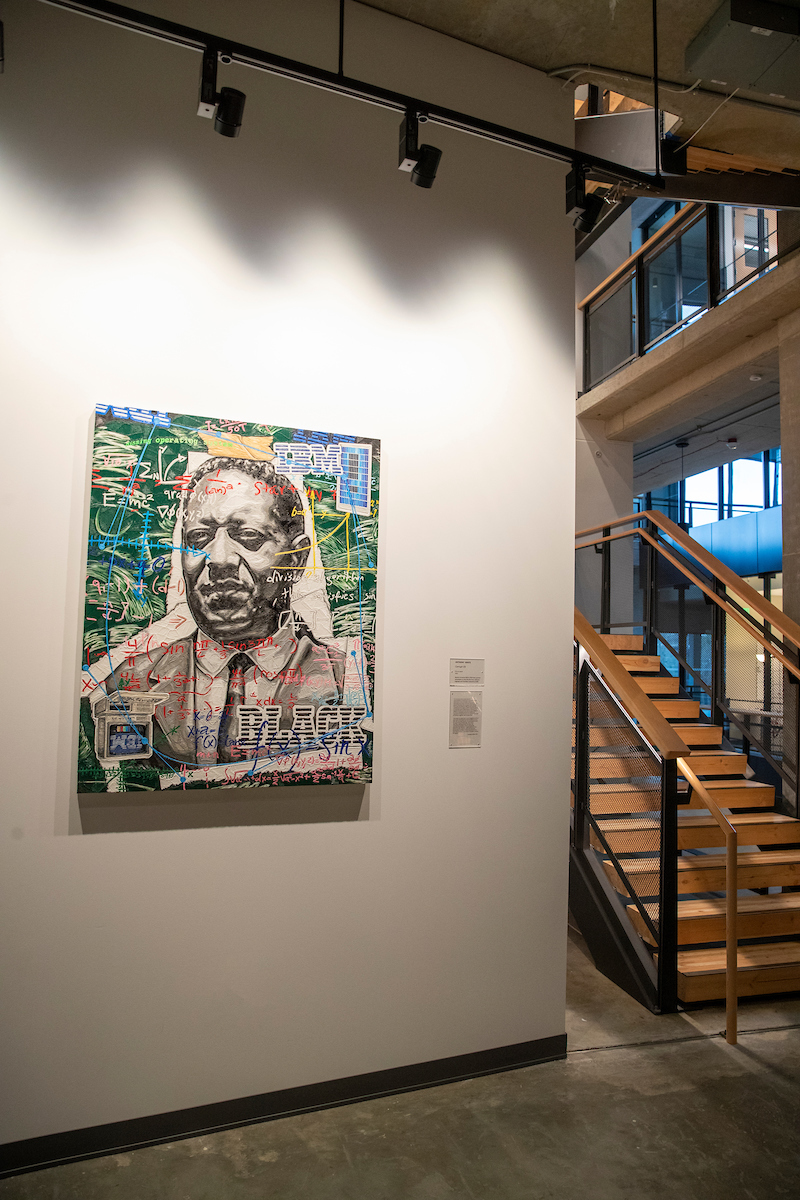 John Stanley Ford became the first Black software engineer in America and at IBM, where he began his tech career in 1946. 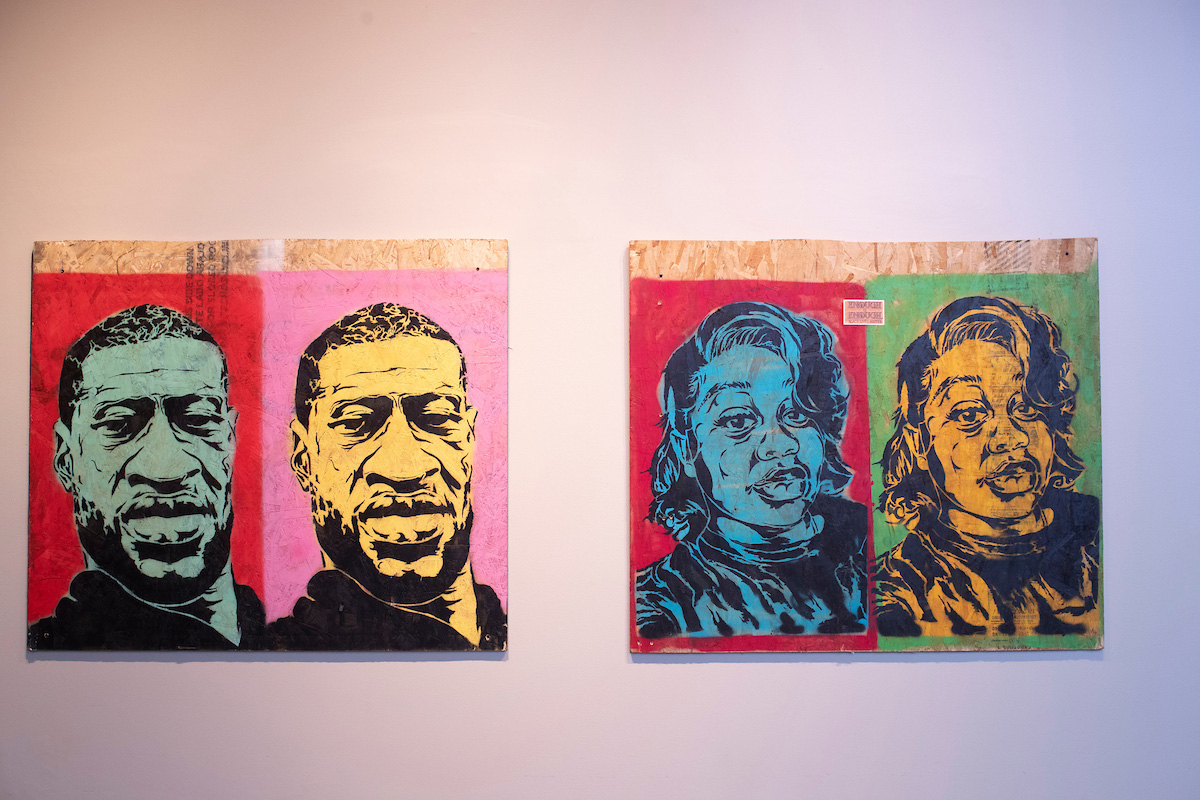 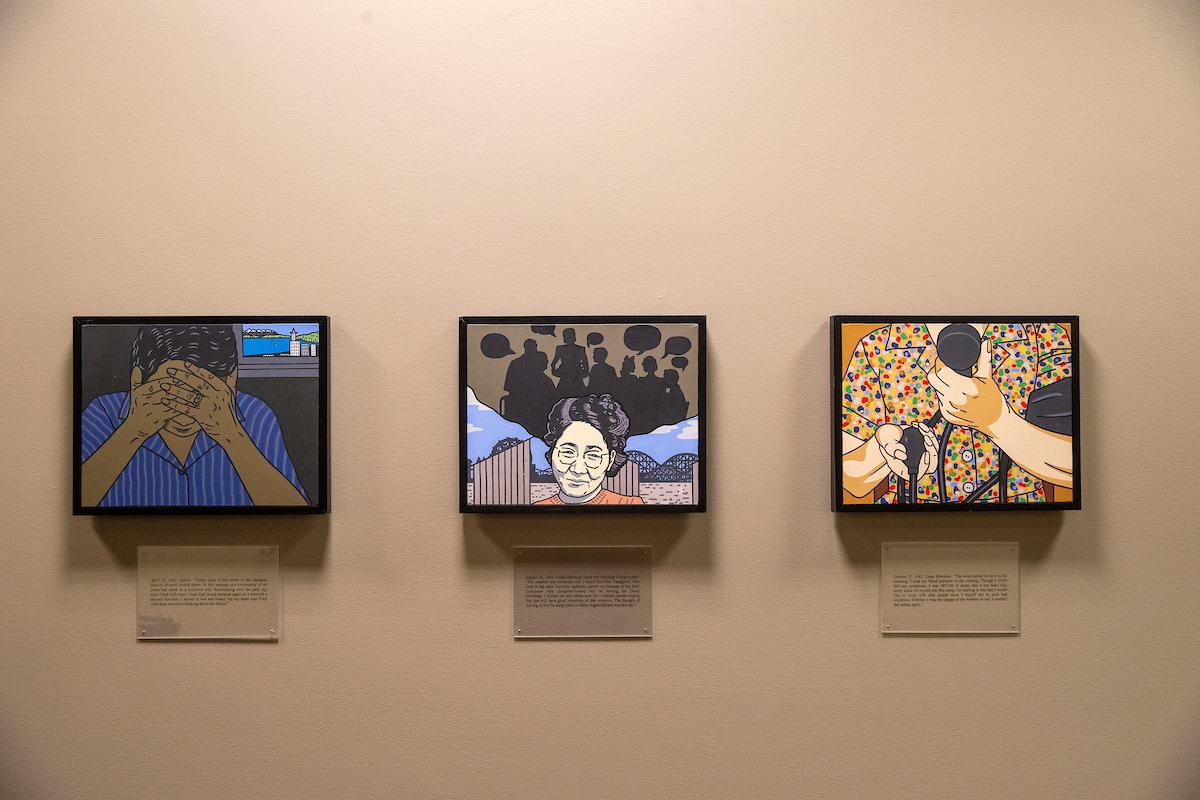 This painting is based on a personal diary written by the artist’s grandmother, Toku Shimomura, while the Shimomura family was interned at Camp Minidoka in Hunt, Idaho, during World War II. 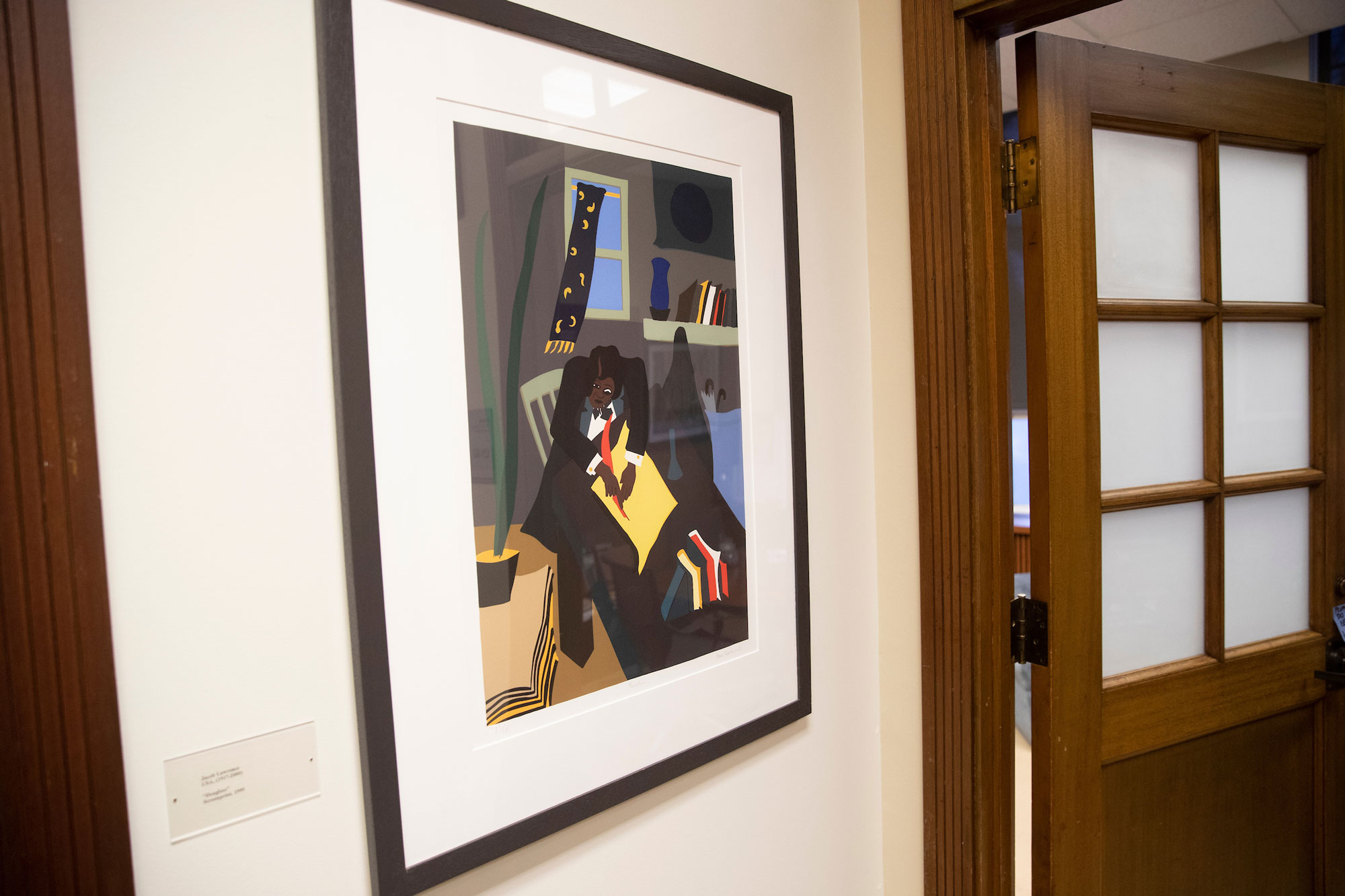 This original print shows the escaped slave Frederick Douglass in Rochester, New York, editing his anti-slavery paper, The North Star, c. 1847. This print is based on the artist’s 1938-9 series of 32 paintings depicting Douglass’ life. 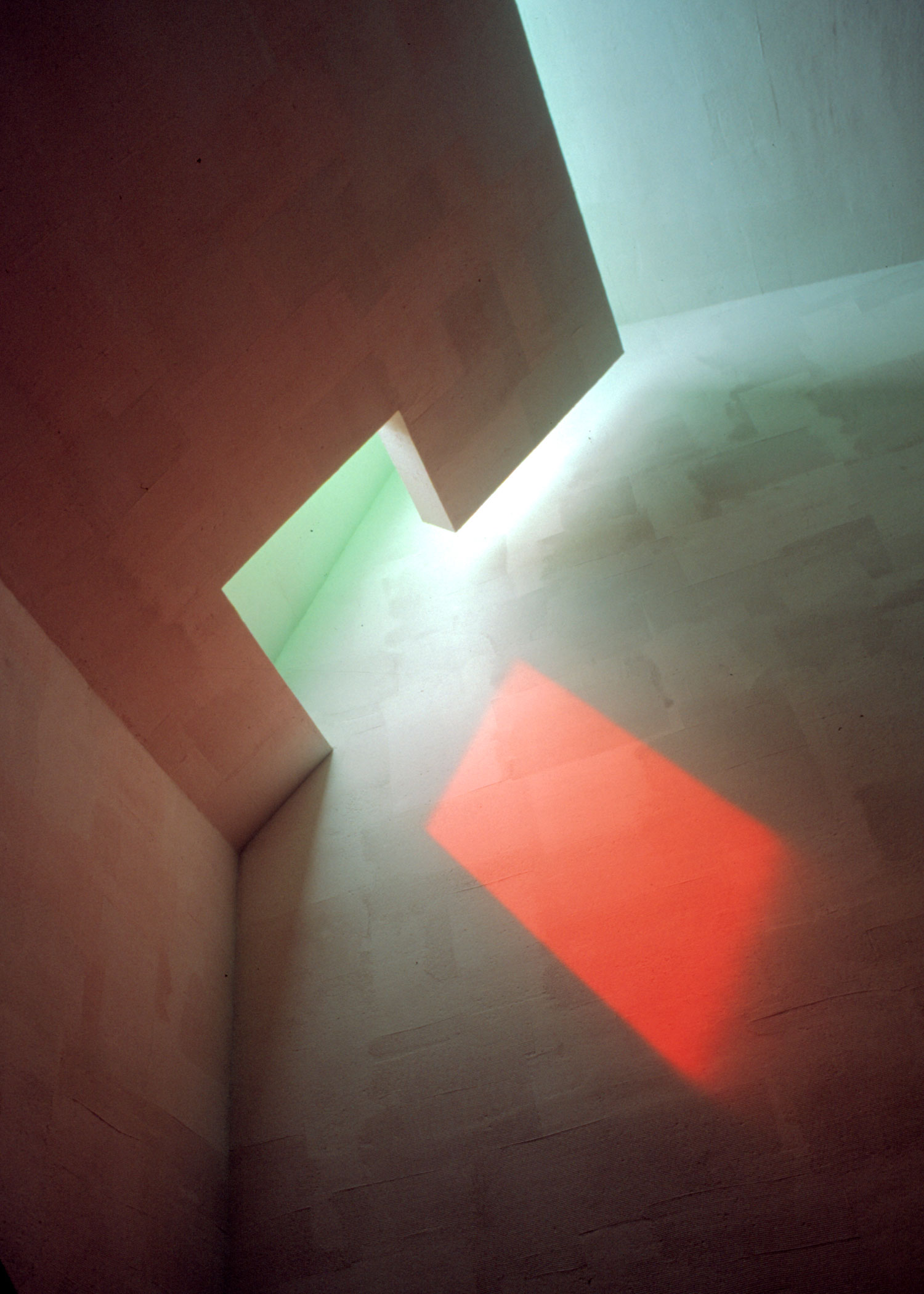 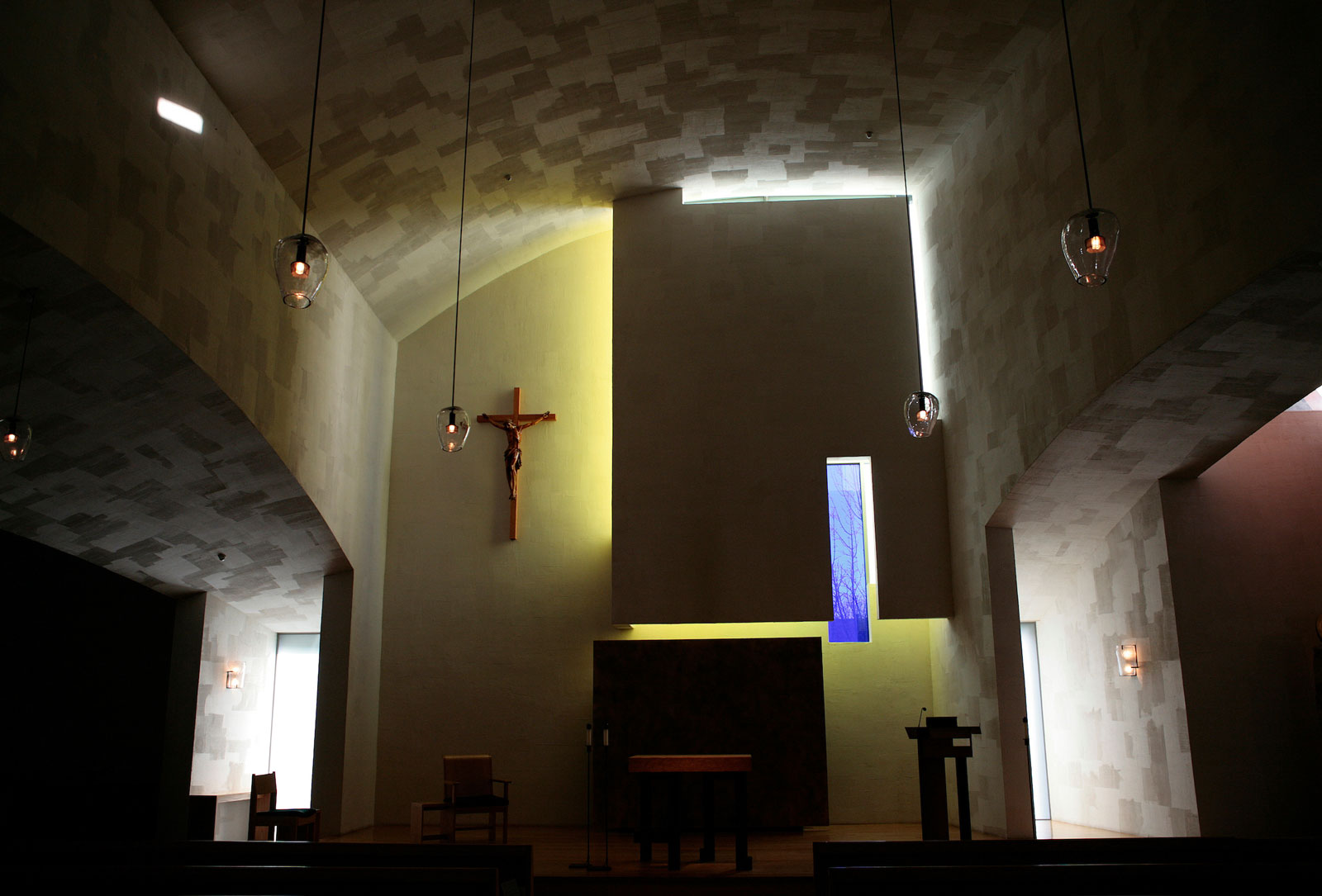 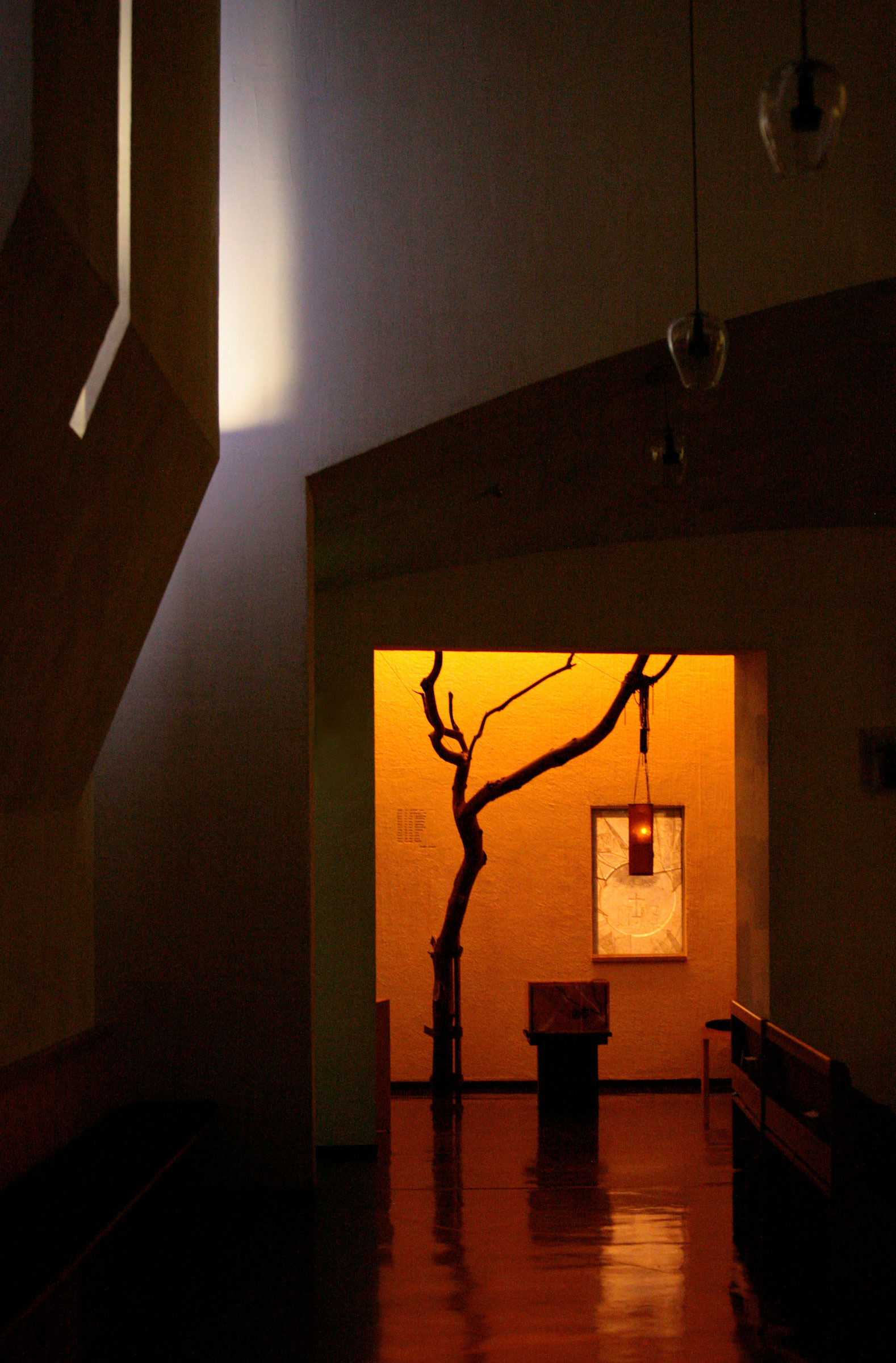 Holl chose “A Gathering of Different Lights” as the guiding concept for the design of the Chapel of St. Ignatius. This metaphor describes Seattle University’s mission and also refers to St. Ignatius vision of the spiritual life as comprising many interior lights and darkness, which he called consolations and desolations. The architect’s model for the building is in the design collection of the Museum of Modern Art in New York City.

This piece reflects the presence of the sacred in our everyday lives and is also a song of praise and thanksgiving to this place and people. 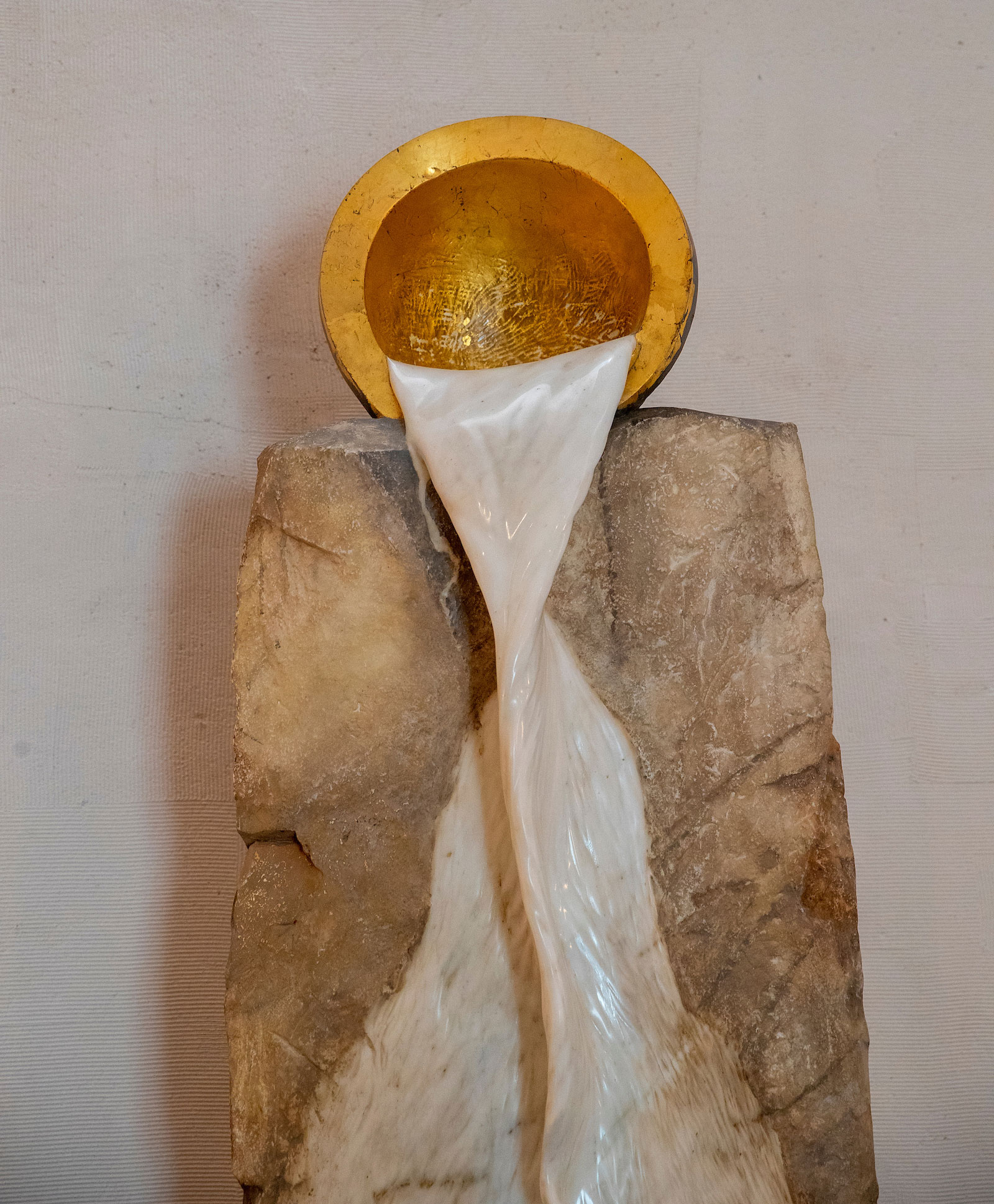 Gratia Plena, which means “Full of Grace,” is a translation of the biblical exclamation of Elizabeth as she greeted Mary, from which developed the most familiar of Catholic devotional prayers, the Hail Mary. 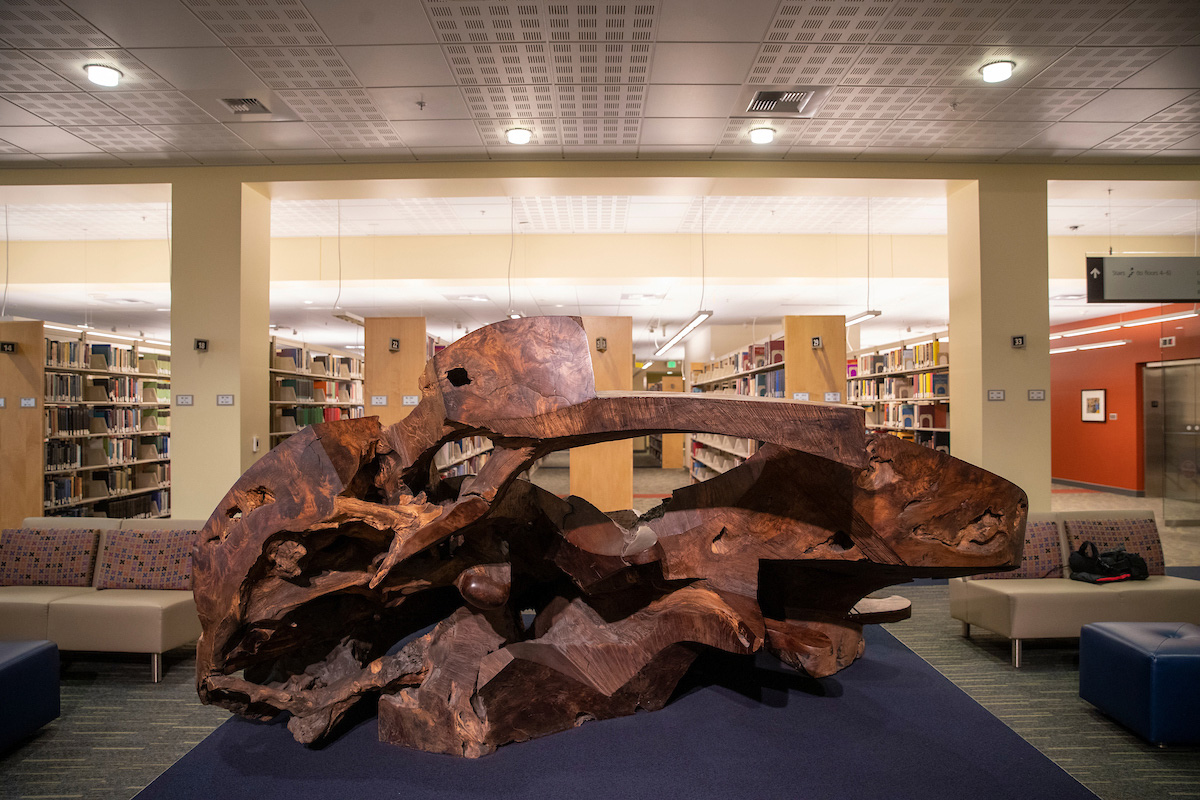 Blunk encouraged people to interact with his work, for people to sit on and touch his sculptures. This work shows the influence of his 1950s apprenticeship with Japanese artist Kitaoji Rosanjin.

The figure of justice is not blindfolded as commonly depicted in other art works, for justice must have clear vision to weigh all the facts. 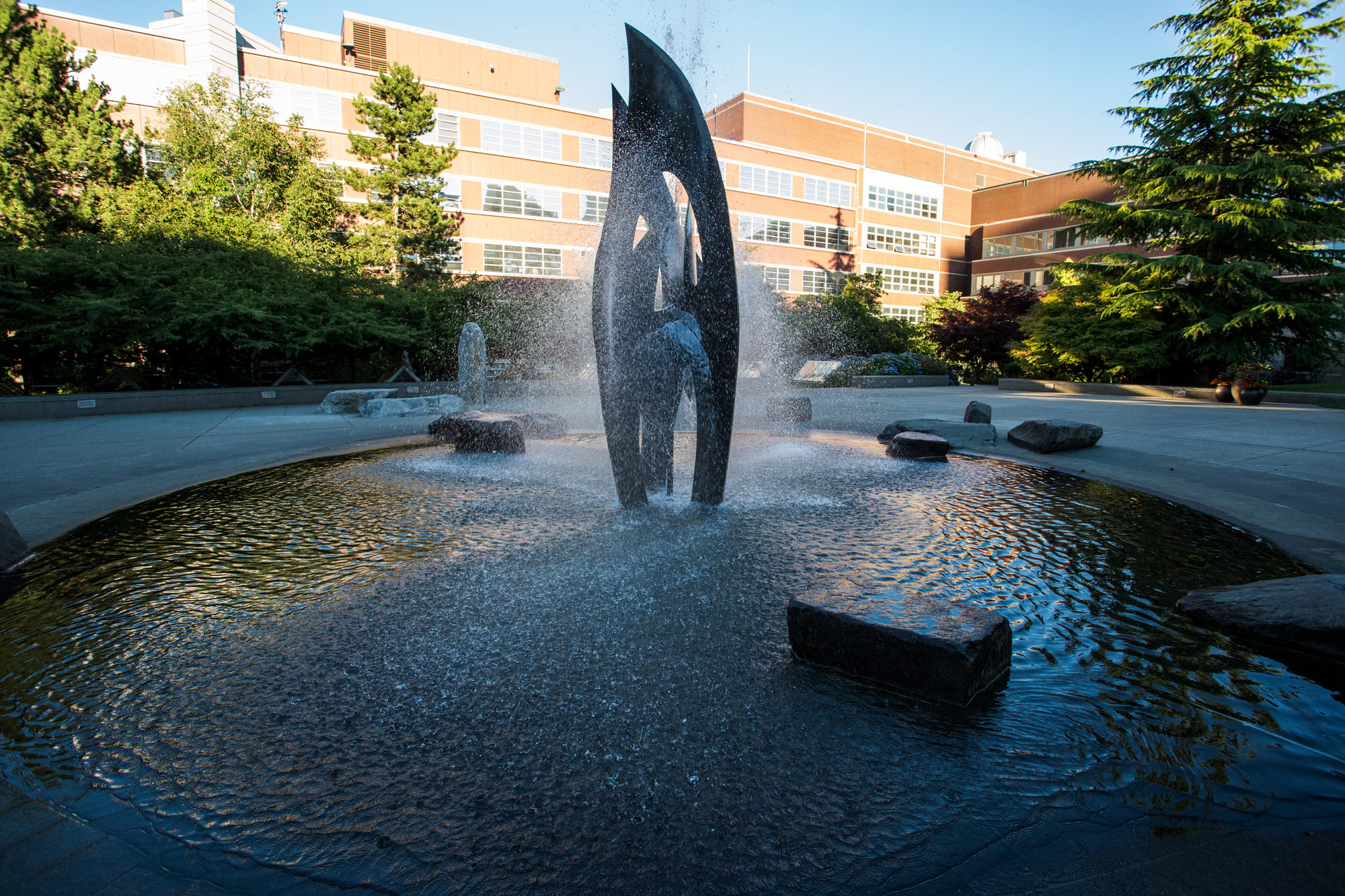 The primary image of the bronze sculpture represents flames recalling Christian iconography of the Holy Spirit and its gifts of enlightenment and wisdom.