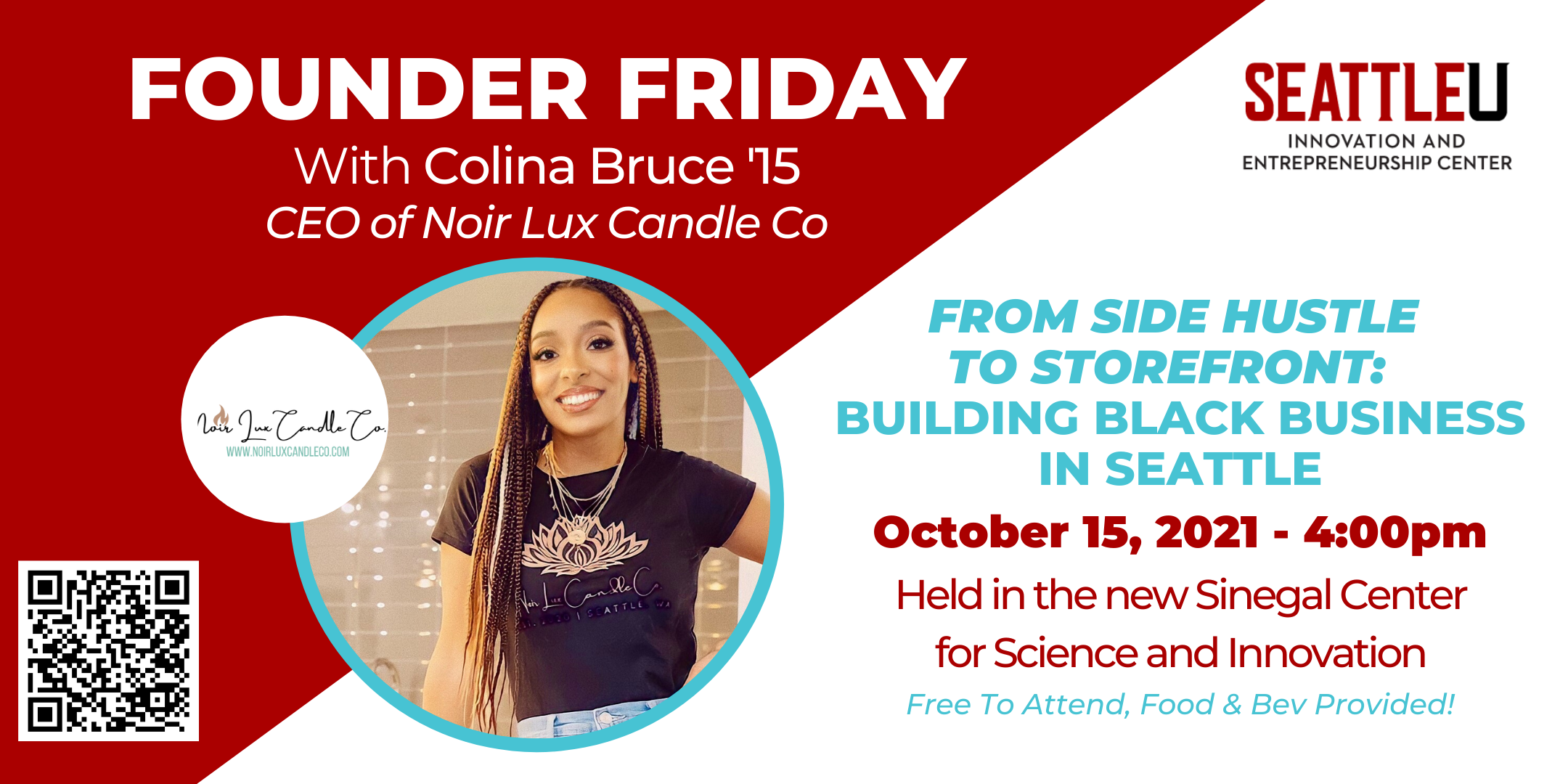 From side hustle to storefront: Building black BUSINESS IN SEATTLE

COLINA BRUCE, CEO, of Noir Lux Candle Co graduated from Seattle University in 2015 with a Master’s degree focused in Nonprofit Leadership, using her strong community and social services skills in her day to day business ventures. Colina is an experienced director with a demonstrated history, serving as an advocate of educational equity for ALL students and families, working directly with students, families and schools to promote strategies that stimulate inclusive environments and practices linked to student achievement. Skilled in Nonprofit Organizations, Event Management, Fundraising, Leadership, and Student Development, Colina aims to build a strong community of business leaders from all backgrounds with her skillset.

Noir Lux Candle Co is a black-owned, woman-owned business, specializing in handcrafted natural wooden wick candles, poured in small batches. Noir Lux believes in self-care, good vibes, and nostalgia, and they have a little something for everybody. 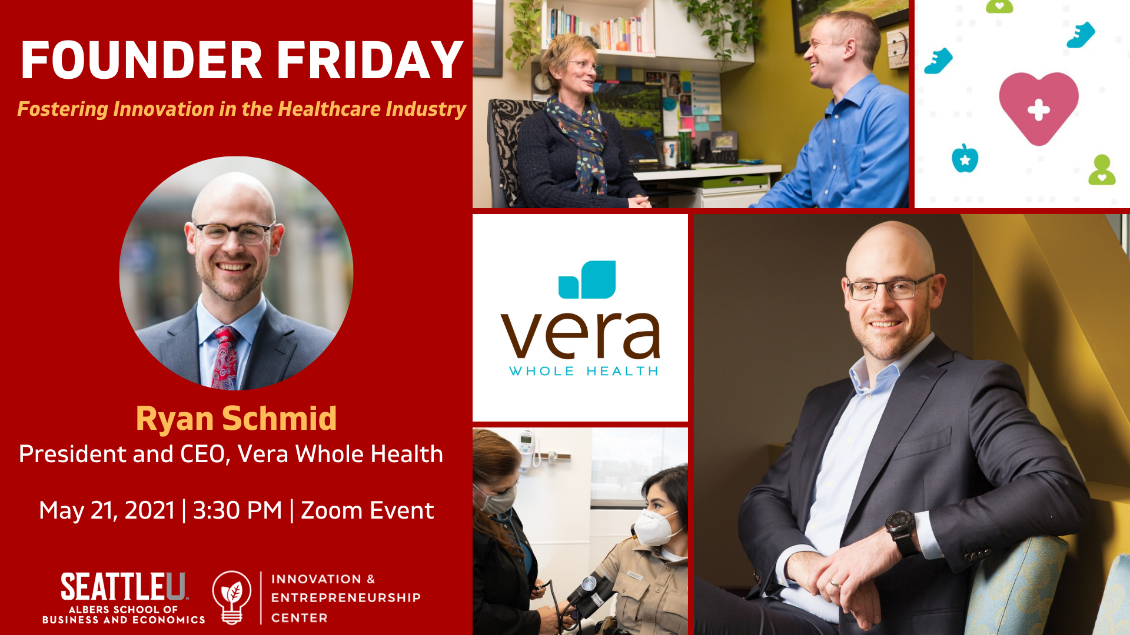 Fostering Innovation in the Healthcare Industry

Ryan Schmid, Co-founder, President and CEO of Vera Whole Health earned his MBA at the Seattle University Albers School of Business and Economics. Ryan entered the 2007 Harriet Stephenson Business Plan Competition and was the Grand Prize Winner. Ryan is set on transforming the reactive sick care system into a life-giving, life-empowering industry, and believes that at the foundation of this new, transformed healthcare system is empathy. 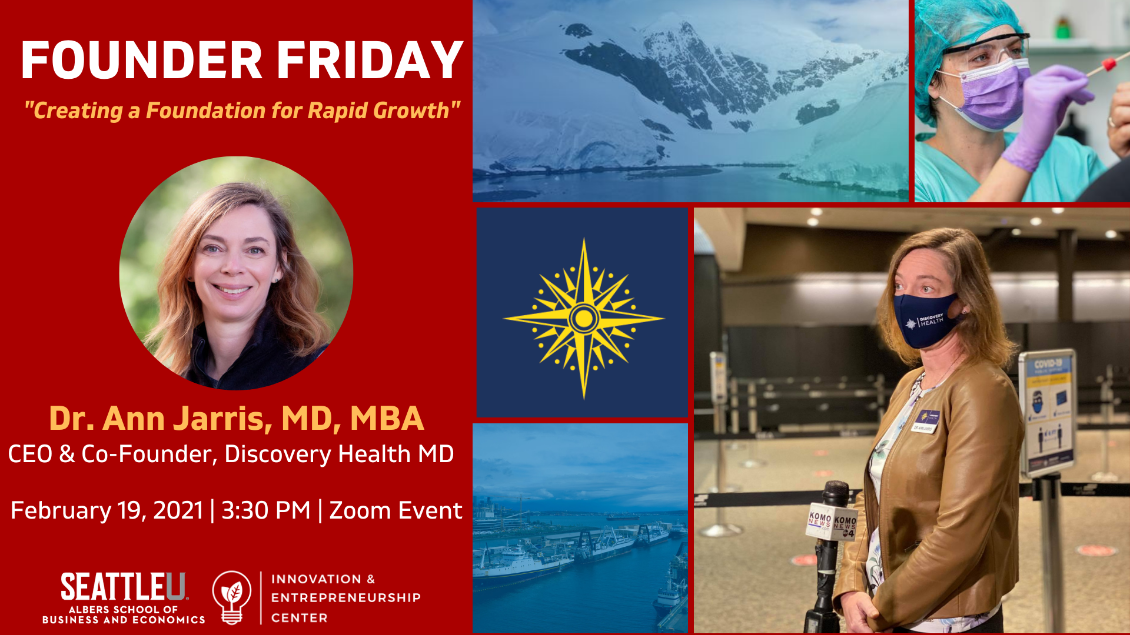 Creating a Foundation for Rapid Growth

Dr. Ann Jarris, Co-Founder and CEO of Discovery Health MD earned her Leadership Executive MBA at the Seattle University Albers School of Business and Economics. As an alum, Dr. Jarris entered the 2017 Harriet Stephenson Business Plan Competition and was the Grand Prize Winner. She also participated in the Jones Progress Awards, an alumni business accelerator also by the SeattleU Innovation & Entrepreneurship Center and received $10,000 and six months of expert business coaching. Dr. Jarris leads the innovation and research efforts at Discovery Health MD, and is experienced in occupational, emergency, wilderness, and virtual medicine.

Discovery Health MD, founded in 2016, is a medical risk management service for the commercial maritime industry, serving the men and women who make their living at sea. Their comprehensive suite of services help protects the health and livelihoods of mariners – while mitigating financial risks for companies. Through decades of experience providing medical support to vessels at sea, and consulting as an expert in maritime claims, the co-founders observed a new approach to medical support at sea. The company consists of highly experienced physicians in maritime, emergency and travel medicine who have a deep understanding of the medical, regulatory, and legal issues affecting the commercial maritime industry.

Using Technology and Innovation to Ensure Health and Safety

Robb Monkman, founder and CEO of React Mobile, earned his MBA at the Seattle University Albers School of Business and Economics. As an alum, Robb participated in the Jones Progress Awards, an alumni business accelerator run by the SeattleU Innovation & Entrepreneurship Center and received $10,000 and six months of expert business coaching. Robb is the visionary for the React Mobile team and sets the strategic direction for the company. Robb's passion for safety and commitment to helping others is the backbone of the organization.

React Mobile, founded in 2013, is a global leader in providing panic button solutions to help organizations protect their employees. Their best in class hospitality safety platform helps hotels keep their employees safe and allows management to deploy resources to the exact location of an emergency within seconds of an alert, getting help to where they need it fast. In an emergency quick response times are essential. Hoteliers realize that housekeeping staff that needs to enter into guest rooms alone can sometimes find themselves in vulnerable situations. Having help available at the press of a button is not only reassuring to staff it could potentially prevent serious emergencies or additional liability from occurring in the first place. 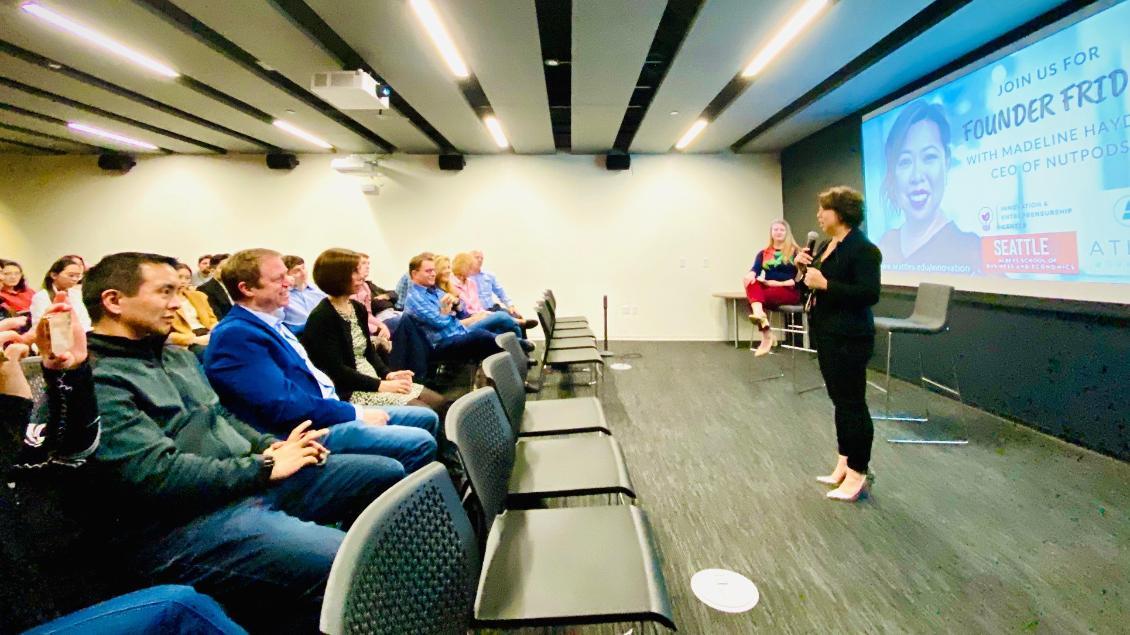 Raising Capital at Every Stage - from Crowdfunding to Private Equity

Madeline Haydon, founder and CEO of nutpods - a plant-based creamer with an online cult following – launched her company in 2013 while earning her MBA at the Seattle University Albers School of Business and Economics and placing as a Finalist in the Harriet Stephenson Business Plan Competition run by the SeattleU Innovation & Entrepreneurship Center. Madeline and her husband (nutpods CFO Geoff Haydon) launched nutpods with a Kickstarter campaign in 2013 and brought the product line to market on Amazon in 2015, where it quickly became the #1 best-selling alternative creamer. After growing by 250% the previous year, nutpods raised $33 million in private capital funding in July 2019 to expand its online brand presence.

About ATLAS Workbase: Co-founded by SeattleU Albers LEMBA alum Bill Sechter, ATLAS Workbase is “the place to conduct business” In Seattle. ATLAS is an intentionally designed premium workspace for the local business community, providing coworking, shared workspace, conference rooms, meeting space, and event venues with everything you need at your fingertips and the flexibility to use it when you need it, ATLAS provides an experience curated with personalized services that make your day better and more productive – claim your free work day at www.atlasworkbase.com today!

How to Select the Right Investors and Advisors for your Startup

About Vita: Vita Inclinata Technologies (“Vita”) was founded to save lives. In 2009, founder Caleb Carr watched as a friend died because a helicopter was unable to rescue him due to the swinging of the helicopter hoisting system. Vita’s initial mission was founded following the death of a member of a local search and rescue crew member. After the team member went into Cardiac Arrest, founder Caleb Carr and his search and rescue team called the Oregon National Guard to rescue him. When the helicopter arrived, the hoist started to lower a basket. However, due to the high winds that night, the swinging basket couldn’t get through the trees below. After multiple attempts of trying to get the basket down to Caleb’s friend, the helicopter pilot called off the mission, and his friend died minutes later.

Simply put, Vita is out to ensure a lack of technology, like was exhibited so long ago, will never be the difference between life and death. Vita is pioneering new innovative hardware solutions for daily safety problems in aerospace, construction, and other dangerous industries. Vita’s first product, the Load Stability System was created to solve the deadly swinging of helicopter hoisting and sling load systems.

About WeWork Labs: WeWork Labs is The We Company’s global platform for early-stage startups and forward-thinking enterprise companies. We empower inventive humans and organizations to impact the present and influence the future. We start with thoughtfully designed spaces that inspire our global community of entrepreneurs to experiment, collaborate and grow. Within these spaces we foster meaningful connections between start-ups and the educational, mentorship and financial resources needed to drive their businesses forward.

Volunteer with the IEC
Donate to the IEC