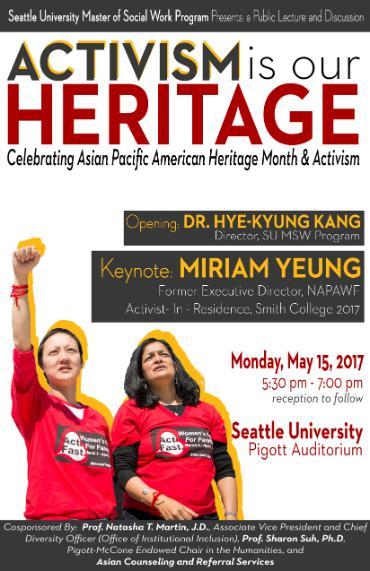 Many do not realize that APA communities (especially in the West Coast and most definitely in Seattle) have a long and vibrant history of activism, and we focus on APA activism in honor of the APA Heritage Month. The stereotype of Asian Pacific Americans (APAs) as "quiet" is one of the most pernicious manifestations of the Model Minority Myth. It renders the needs of our communities invisible. It diminishes our political power. It isolates us from communities of solidarity we need to be building. And it results in the internalization of the traumas our communities are surviving.

Raised in the projects of Brooklyn, Miriam Yeung is proud, queer, immigrant, woman activist. She is the former Executive Director of the National Asian Pacific American Women's Forum (NAPAWF), the nation's only national multi-issue organization dedicated to building power and winning reproductive justice, economic justice and immigrant rights for APA women and girls. She was named as the Activist-in-Residence at Smith College in 2017.