The Army ROTC program at Seattle University was activated in 1951. First organized as an Ordinance unit, it was converted to a general military science program in 1955. The basic program was mandatory for all qualified male students until 1965. In that year, the entire program became optional. The Military Science Program has instructed well over 9,400 students since its inception. Over 1,400 officers have received commissions in the U.S. Army upon completion of the program. As a five-time winner of the MacArthur award, most recently in 2000, considering Leadership Development and Assessment Course performance, overall GPA, and the number of cadets being commissioned from the program, the Battalion has established a reputation for excellence in overall performance. 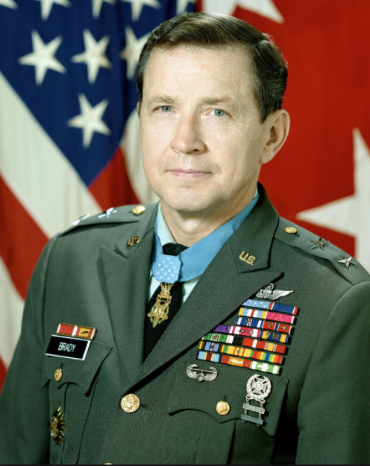 One of the many distinguished officers this Battalion commissioned is Major General Patrick H. Brady. MG Brady is a Seattle University graduate and an alumni of Army ROTC. MG Brady was awarded the Congressional Medal of Honor for his actions while serving in the Republic of Vietnam as a helicopter pilot. In his honor the battalion has created a unique "Hall of Valor" which commemorates those Seattle University alumni who paid the ultimate sacrifice in service to our nation. This Memorial is located in the ROTC office and it provides a legacy to current ROTC cadets about the rich heritage of the Battalion.

In Honor of Those Who Have Paid the Ultimate Sacrifice

Theodore Roosevelt President of the United States of America