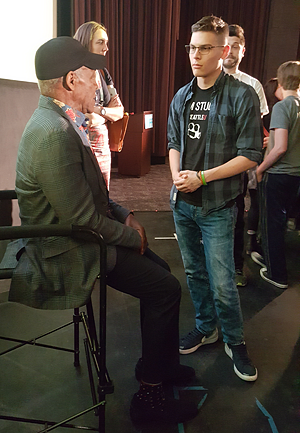 Film hosted 39 events over the year, including campus screenings with our partners the Tasveer Film Festival and the Social Justice Film Festival. Highlights included the two time Academy Award winning Filmmaker Sharmeen Obaid Chinoy's screening and discussion of A Girl in the River. In March the Society for Cinema and Media Studies Annual Conference was hosted in Seattle with over 3000 scholars attending. Three special conference events were organized by Seattle U film faculty including a panel of Northwest film practitioners moderated by John Trafton at the Egyptian Theater,  a screening of one of Dr. Johnston's films at Northwest Film Forum and a discussion of ethnographic film at the Burke Museum with Dr. Schultz-Figueroa. Film started a new Professional Development series called 'Movie Bites' featuring filmmaker and producer Dan Merlino and Washington Filmworks CEO Amy Lillard in conversations with students about career pathways. Spring saw two sponsored films (Lynch, Good Kisser) and one industry panel at the Seattle International Film festival, and Danny Glover, the Executive Producer of Lynch, a documentary on race and sports turned up at one of the screenings! Finally, the large graduating class celebrated with the first awards ceremony for Film Students with new prizes and trophies given out. One of our alumni Brandon Bassler has already secured a job as a Publicity Assistant at Lifetime Television!