2016-17 was a busy year for Film Studies. As the new Program Director, I joined other new faculty (John Trafton, Ben Stork, and John Comerford) in teaching new classes on Los Angeles and Cinema, Producing, Animation, and Crime cinema. $8000 of camera equipment was purchased, designs began for a dedicated film classroom, and the university agreed to hire two more full-time film faculty. The year’s high point was a visit to SU from Hollywood actor Val Kilmer in a special Q & A as part of his touring one-man film on Mark Twain. 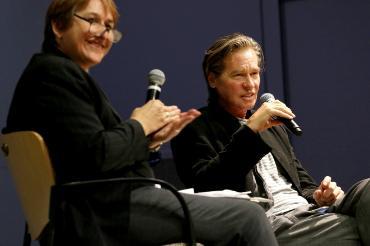 The Film Studies Program bid a sad farewell to Professor Georg Koszulinski, who has been the mainstay of our film production program since 2013, as he joins the University of Wilmington, NC this fall. During the year, Georg hosted several screenings of his new or completed work, including White Ravens (on the Haida Gwaii) and Loa (on Haitian Vodou religion). Georg and I travelled to Washington DC this year to participate in the Million Women’s March and the protests around President Trump’s inauguration. Footage shot at the inaugural protests by Georg was turned into a rough cut called America is Waiting and was shown at Northwest Film Forum in June 2017. You can see Georg’s work at http://www.substreamfilms.com/.