It has been another stellar year for MACJ students! Our MACJ students are getting out of the classroom and into excellent experience in the field and networking. We had several students (and numerous faculty) attend and present at the Western Society of Criminology Conference in Las Vegas in March. Even more faculty, students, and alumni members will be heading to Prague this July to present at the International Congress on Law and Mental Health Conference.

The highlight of the quarter was the 10th Anniversary MACJ Celebration that took place in May. Turnout was fantastic with current undergraduate and graduate students, MACJ alumni, Advisory Board members, faculty, and staff in attendance. The anniversary and networking event provided many opportunities for current students and alumni to build connections and further develop their existing networks. Many thanks to all who attended! Also, thanks to those who helped to make the event a success as well as the Criminal Justice Department and the College of Arts and Sciences who assisted in funding the event.

Please note that our 2006 giving campaign is still underway. In celebration of the MACJ program founding year, the 2006 giving campaign asks both current students and alumni to give $20.06. Your donation will assist in funding student scholarships and research supported by the CJ Center for the Study of Crime and Justice.

Thanks to those who have supported this wonderful campaign! 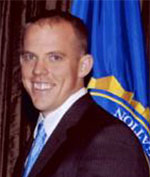 James Bevan-Lee graduated from Whitman College in 2010 with a B.A. in Sociology and minor in Psychology. As an undergraduate, he interned as a teenage probation officer in the Tri Cities, focusing his undergraduate thesis on researching gangs from rural areas, which helped spark his interest in the criminal justice system. Upon graduation from Whitman he joined the United States Coast Guard Reserve and started working as a Seattle University Public Safety Officer. After immersing himself in the Seattle University culture, he reached out to the criminal justice graduate program and found it to be a perfect fit. James enrolled in the program in the spring of 2011 and graduated Fall 2016.

During his time as a student, James went on three deployments while continuing to work full time. The staff and faculty’s constant support, flexibility, and open communication allowed him to accomplish so much while also achieving a lifetime goal of pursuing higher education. James values his Seattle University education as an ends in itself, and gains incredible satisfaction in his career because of his ability to understand the societal impacts and benefits of his everyday work. No matter what job or undertaking James will go on to have, this education provided him the tools necessary to problem solve and understand any future endeavors within the criminal justice field.

James graduated with his Master of Arts in Criminal Justice with specialization in Investigative Criminology in September of 2016 and has been working for a federal agency within the intelligence community for the past five years. He loves his current role and hopes to continue to advance into a leadership role within his current team. In his free time he is a competitive crossfitter and recently helped his team, Cascade Crossfit, qualify for the Crossfit Games.

A Seattle native, Debi enjoys spending time with her family, which includes two-year old twin daughters, who definitely keep her on her toes!

Karolyn Kukoski graduated from the University of Washington with a BA in Sociology in 2009, and promptly began working in the bakery at a newly opened Whole Foods. Identifying as a semi-proficient cake decorator, she felt drawn to social services and through volunteer work and local activism, Karolyn ultimately found herself working a night shift job as a Residential Counselor at the Downtown Emergency Service Center. While working at DESC, Karolyn became passionate about her work with chronically homeless vulnerable adults experiencing mental health and chemical dependency issues, many of whom experienced frequent victimization as well as ongoing interactions with the Criminal Justice System. Out of a desire to pursue a career serving these populations, she enrolled in the MACJ Program and said goodbye to sleep.

During her time at Seattle University, Karolyn has served twice as a Research Assistant for Dr. Helfgott and her text on Psychopathy, assisted as TA for Dr. Helfgott’s Psychopathy course, presented at the Criminal Justice Leadership Academy, and worked as a Research Assistant to Seattle Police Department and their Consortium for New Paradigms in Policing. While working on her thesis, Karolyn served at Sound Mental Health as a Forensic Clinician and Case Manager, providing mentally ill offenders with court mandated mental health treatment and assisting them in their transitions into the community. Most recently, Karolyn has taken a new position as the Ombudsman to the Department of Social and Health Services’ Special Commitment Center, a treatment facility located on McNeil Island which houses upwards of 230 residents civilly committed as Sexually Violent Predators under RCW 71.09.

As the Ombudsman to this facility, Karolyn serves the SCC as an independent, impartial, investigative entity for residents, staff, and outside agencies. Karolyn is responsible for examining complaints in light of relevant statutes, rules, policies, court decisions, and working to achieve solutions; as well as identifying systemic problems and trends, while making recommendations to the Administration within the Department of Rehabilitation for resolution. Karolyn is enjoying the challenge of this new position, and eagerly awaiting the final defense of her Thesis later this spring, entitled Lethal Use of Force Incidents Involving Persons with Mental Health Disorders: A Qualitative Media Analysis- which examines fourteen years of lethal use of force incidents between Police and individuals with mental health disorders. In her spare time she enjoys playing with dogs, playing the autoharp, and is still a semi-proficient cake decorator.