OHESC OFFERS 30% OFF WITH DISCOUNT CODE TO SU MEMBERS

The Washington and Oregon Higher Education Sustainability Conference (WOHESC) is happening on March 4-6 at the University of Oregon. Use discount code SEATTLEUCEJS20.

Find out how you can get involved in environmental justice and sustainability on campus while growing your resume.

SEATTLE UNIVERSITY RANKED #2 NATIONALLY FOR ITS SUSTAINABILITY CURRICULUM by AASHE

Seattle University was ranked #2 nationally for its sustainability curriculum by The Association for the Advancement of Sustainability in Higher Education in their 2019 Sustainable Campus Index.

Seattle University has been recognized by EnviroStars, a regional coalition of counties, cities and utilities, for its commitment to conserving resources and protecting the environment. Earning the program’s highest designation of “Champion,” SU is the first institution of higher education in Washington state to be recognized as a green business by EnviroStars.

EXTENDED DEADLINE: APPLY FOR THE 2020-2021 CEJS STUDENT FELLOWSHIP BY APRIL 20

Two scholarly products will be awarded with a $2000 stipend per project; faculty mentor will receive a $500 stipend. Deadline: April 20 at noon.

Join us for "EarthTalks," a digital event at SU with 5-min presentations about sustainability by students, faculty, and community partners.

Until April 22, Earth Day Network is featuring '50 voices for the Planet', the most in fluential voices for our planet.

In preparation for writing SU's Sustainabiliy Action Plan, CEJS asked the SU community How might SU be more Sustainable? and How might you support SUstainability?  View a summary of the "Your SUstainability" ideas here or check out the list of ALL IDEAS submitted here 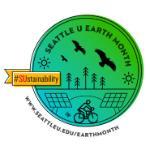 Earth Month 2019 was an eventful few weeks. Seattle University hosted speakers, events, and a month-long campaign called "Your SUstainability Idea?" to gather campus input for the drafting of the new Sustainability Action Plan. Read more for a recap on the activities that took place during Earth Month 2019!

The President's Committee for Sustainabilty (PCS), presented its "Climate Prositive Campus" proposal to various student groups on campus. The proposal highlights how Seattle University can not only go carbon neutral, but a step further as "climate positive" with the help of carbon offsets.

SU is a Top 10 school according to the 2018 “Cool Schools” rankings in Sierra, the magazine of The Sierra Club

SU WILL DIVEST FROM FOSSIL FUELS

SU will become the first university in Washington state and the first Jesuit school in the nation to divest its endowment from fossil fuels over the next five years.

READ MORE ABOUT SU WILL DIVEST FROM FOSSIL FUELS

The Carbon Pricing Initiative calls on leaders in higher education to demonstrate support for a policy that has the power to avert catastrophic global warming: a price on carbon

Seattle University was well represented at the Washington and Oregon Higher Education Sustainability Conference (WOHESC), which took place in Seattle Feb. 25-27. Natasha Martin, vice president for diversity and inclusion (left), was a plenary speaker on a panel that discussed integrating social sustainability across the academic system and building a thriving campus environment that connects universities with their community, region and world.

In June 2018, Seattle University's second STARS report resulted in a GOLD rating with an improved score of 75.64. Go SU!

SEATTLE U IS #48 IN SIERRA'S COOL SCHOOLS RANKING

SU is in the top 50 of Sierra magazine's coverage of America's greenest colleges. We're working hard to crack the top 20 within the next year!

From sorting through the trash at SU, the Garbology event revealed that 62 percent was actually compostable and 21 percent was recyclable!

SU is ranked #8 on the list of Overall Top Performers in sustainability among Master’s Institutions and #3 Top Performer in the category of Wellbeing & Work.

Take a look at what SU and other universities in WA are doing to stay green!

Compostable paper towels make up 96% of bathroom waste. Sign the petition to show your support of paper towel composting in bathrooms!

READ MORE ABOUT THE PETITION!

Hear from local organizations on how they’re building climate resilience and how we can best support communities on the front lines of climate disruption. The summit will be hosted here at Seattle University!

Bon App is recognized for trailblazing social and environmental responsibility!

$30,000 was granted to SU Faculty from the Freeman Foundation to work on a sustainable coffee project this summer in Vietnam!

RECYCLEMANIA RESULTS ARE IN!

Seattle U ranked 6th out of 170 schools in the waste diversion category! Go Redhawks!

SU WILL DIVEST FROM FOSSIL FUELS

SU will become the first university in Washington State and the first Jesuit school in the nation to divest its endowment from fossil fuel reserves over the next five years.