My current fellowship term exploring the responsibilities of leaders and followers began last July outside of Toronto. I joined international scholars and practitioners, including Ira Chaleff author of the pioneering book The Courageous Follower: Standing Up To and For Our Leaders, at the University of Waterloo’s inaugural Global Followership Conference.  There were opportunities to promote followership research, form followership networks, and develop one’s own followership through exercises. Those included dancing to feel what it is like to follow and lead, launching goals on paper airplanes and a constructing a “Möbius Strip” to physically represent the co-dependence of leadership and followership.

A highlight of this conference was co-presenting research with recent Seattle University graduate, and now Albers School alumnus, Mary Han (pictured below). We examined the influence of female caregivers on young adults’ beliefs about followers. This Spring she and I welcomed the news that this work received the 2020 Albers Faculty-Student Research Collaboration Award and is now under review in a special issue of the journal Industrial and Commercial Training.

In Waterloo I also attended multiple sessions, which pushed me to consider my own followership philosophy.  Prior to the conference I was comfortable defining a “follower” as someone falling within a hierarchical position—a follower lacks legitimate power to make decisions and therefore followership simply involves following the directives one receives when occupying a subordinated role.  However, conference sessions emphasized followers’ co-creation of leadership, and encouraged me to think more deeply about whether it is appropriate to embed the independence and strength required of followers into my definition.  We associate leadership with influence, motivation, vision and, importantly, courage. Why wouldn’t parallel notions help define followership?  One might even make the argument that followership warrants this new spin to upset the pejorative assumption that followers are sheep. 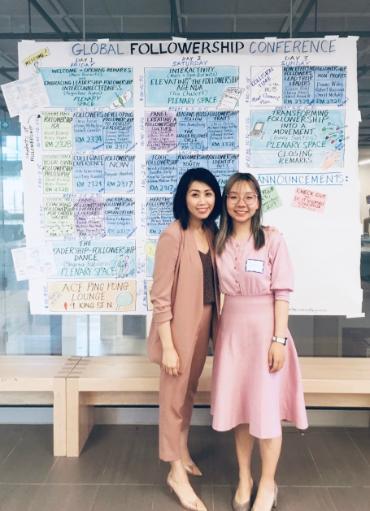 With More Power, Comes More Responsibility
Although intrigued, I grew concerned about how this new way of thinking about followers would impact my interpretations of events when leadership goes awry. If followers play a larger part in co-producing leadership, then were they partly to blame for leadership debacles? This line of questioning makes me uncomfortable—not because I don’t want to hold perpetrators accountable (regardless of role), but because I wonder if it actually discourages the brave, courageous, and active followership movement that I’ve long supported.  For leaders and followers, speaking up and exerting influence is risky but at least leaders are attributed credit for when their actions lead to favorable outcomes; traditionally, followers are unromanticized and do not share in that recognition.

I am not alone in dissecting followers’ contributions to disasters and disappointments.  For example, in her Harvard Business Review article, Lynn Offermann (2004) described how advisers imparted their own bias upon President Kennedy, ultimately encouraging the United States to enter Vietnam.  And media reports pointed to “yes men” or “mini-Marks” that enabled Mark Driscoll’s abuse of Mars Hill Church’s congregation.   Nascent work on toxic followership examines how the actions followers can undermine or manipulate leaders, stall leaders’ progress, support wayward missions, and harm co-workers.  Despite appealing to my interests in followers’ active involvement and engagements in the organizations, I’m worried that the toxic followership narrative may be more advantageous for leaders than followers.  For the former, who wouldn’t want to share or displace the blame for disastrous outcomes?  For the latter and other onlookers, it is easy to imagine how passive involvement and disengagement look more attractive in hindsight!

The Call for Courage
An emphasis on courageous followership is therefore worthy of our attention. But “courage” doesn’t mean foolish or unintelligent.  So, speaking strategically, highlighting the relatively graver consequences to followers born from inaction and disengagement could encourage active followership in organizations.  But if scaring followers (an already disenfranchised group) into action while also reminding them that they will be accountable for failures doesn’t sound quite right, then perhaps you will join my call for investigations into the benefits of active followership for followers. Growth in toxic-followership scholarship and interest in the co-creation of leadership, necessitate an answer to the question, “Why would anyone want to be an active follower?”

Colette Hoption was a 2019/2020 faculty fellow at the Center for Business Ethics and an associate professor of management.