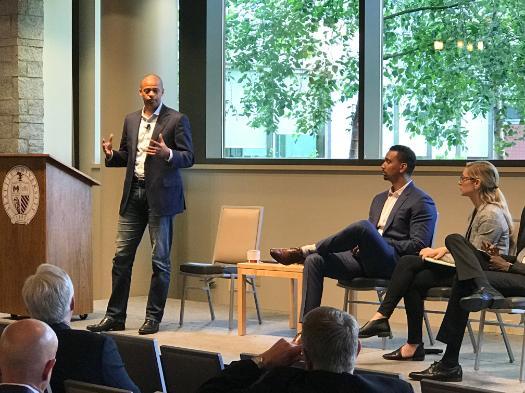 Locoh-Donou participated in the Albers Executive Speaker Series on June 3rd, pursing the theme of, “Giving as a Leader.” He shared that the most successful and impactful leaders are “givers.” What does it mean to be “giving?” It means you are accessible, you give feedback, you listen, you answer questions, you help people identify their strengths, you help people gain confidence in themselves. It is a generosity that is people focused and takes your leadership to another level.

Early in one’s career, Locoh-Donou said, one is more in a “proving” stage, proving that you can get the job done, solve the issue at hand. The key is to move from “proving” to “giving,” and while this shift will accelerate your leadership and have high impact, it is not something we are normally trained to do.

Locoh-Donou noted that early in his career when he was working at Ciena, a network strategy and technology firm, he experienced self-doubt and thought that he was in over his head and not qualified for his new role. But he persisted and was gradually able to gain confidence based on the support of others. He stressed the importance of “getting people on your team,” by reaching out to others in the organization and winning them over with your sincerity and authenticity. He also noted that both successes and failures can build confidence, as achievements let you know you can get the work done, and failures can be learned from, including learning that you can survive a failure!

One theme he addressed was the flaws of “Management by Force,” which can occur within an organization or even throughout an entire nation, as might happen in a long-standing dictatorship. Management by Force does not work in the Knowledge Economy, Locoh-Donou observed. In the Knowledge Economy you need employees to show passion and commitment, and a top–down, authoritarian culture will not achieve that. Leaders need to lead with giving in order to create an environment that builds commitment. Locoh-Donou observed that he views F5 employees as volunteers. They have many employment options and he needs to create a culture where they choose F5!

He told an interesting story of how he became a cashew farmer in Togo, where he grew up. As a boy, he always wanted to be a chicken farmer. He did not end up pursuing that, but after college he reconnected with a childhood friend who had studied agriculture and poultry farming. They decided to start a large chicken farm in Togo, and were successful in doing that, but the farm only employed 30 people and they wanted to create something that would be more employment intensive and have more impact on the community. So they searched for an alternative, and found that cashew farms were being created in the nearby country of Benin. They decided to pursue cashew farming in Togo, and now they are employing 600 people in an enterprise that exports 400 tons of cashew kernels to the US and Europe annually.

He shared a story to illustrate how they are having the economic impact they hoped for – the cashew factory workers work on Saturdays, and in the local region Saturday was the day reserved for wedding ceremonies. Initially, this was not an issue, for the women preferred to be working (80% of employees are women). As time went on, however, the women were experiencing an improved standard of living, and able to afford more stylish clothing, clothing that they wanted to wear at celebrations such as weddings. The result was the women successfully lobbied to move the wedding day to Sundays, when they did not have to work and could attend the ceremonies!

As you might expect, Locoh-Donou was asked about the lack of diversity and inclusion in the technology industry that he works in. He replied that a major reason is that the sector has not put emphasis on diversity and inclusion. There was not much attention paid to creating access or fostering an inclusive environment. So, one thing they are doing is to support organizations creating access to STEM, increasing the pipeline as it were. A second is to create an inclusive culture, which they have been working to achieve at F5. He said you have to be clear about what is acceptable behavior in the work place and what is not, and you can make progress very quickly once that is clear. It may require making some hard decisions when expected norms are not followed, but such moves will accelerate the culture change you are hoping for. He said a key for creating inclusion is to have a desire to learn about the experience of people who are not like you. Understanding the adversity experienced by others will allow you to support others, and you will never be a giving leader if you do not gain that understanding.

François Locoh-Donou was a hit with our audience! Students were inspired by his personal journey and by his outline of the Giving Leader. It was a privilege to host him on our campus!

Joseph Phillips has served as Dean of the Albers School of Business and Economics at Seattle University since 2001. The school serves approximately 1000 undergraduate and 600 graduate students. Albers is distinguished by its focus on student success, commitment to ethics and social responsibility, pursuit of academic excellence, strong ties with the Seattle business community, and emphasis on preparing values-driven leaders committed to contributing to the Common Good.