Happy 2017!  We already know it is sure to be an interesting year!

As 2016 drew to a close, I took a trip to Hong Kong and China with Fr. Steve Sundborg, SJ, president of SU, and Jim Hembree from University Advancement.  We arrived in Hong Kong on December 16th, they from the Middle East where they had been visiting SU alumni, and me from Seattle.  The following day we set out for Zhuhai by ferry.  Our arrival was the occasion of Fr. Steve's first visit to main land China!  The event was properly recorded by photo: 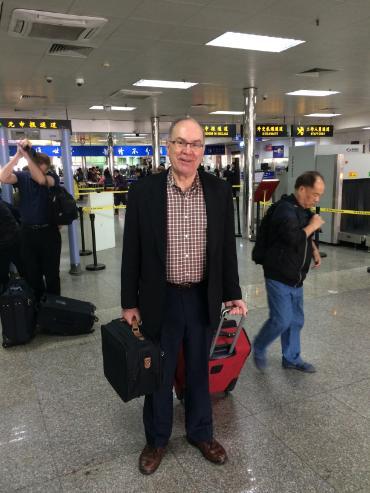 In Zhuhai we visited the Ocean Kingdom, the second time for Jim and I.  The five-D cartoon show is now up to six -- in addition to your three D glasses, the seat shakes, water is squirted in your face, evil crabs nip at your heals, and -- the newest addition -- there is the aroma of burning flames and other scents!  The top experience in the park for adults and kids, even the second time around!  We also took in the orca and beluga show as well as the polar bears, penguins, and giant aquarium (holder of five Guinness world records for size).  An added feature for the orca and beluga show is panning the audience on the big screen (an idea borrowed from the NBA apparently).  Fr. Steve was a big hit on the big screen!  It should be noted that since this was not the high tourist season for the park, we appeared to be the only Westerners in the audience!

After the tour of the park concluded, we drove to Guangzhou to meet with alumni and checked in at the Chimelong Theme Park Complex.  The next day we toured the Safari Park where an ostrich got into my personal space (but I survived), then went to the Kuala Bear Exhibit where Fr. Steve took time to call his brother in Fairbanks where it was -26 degrees!!  Jim and I then reconnected with our panda triplets, who we had seen in May when they were only a few weeks old.  Of course, these pandas are much bigger and wiser, and slept through our entire visit.  No way to be treating your uncles!!

In the afternoon we drove to downtown Guangzhou and visited the Canton Tower, one of the tallest buildings in the world and taller than anything in the US (but not taller than the Burj Khalifa built by SU alum Mohamed Alabbar in Dubai!).  It was quite a sight from the top, where one can see the tremendous expanse of high-rise buildings in Guangzhou.  On a clear day, you can no doubt see a very long way!  Here is a shot of Fr. Steve looking relaxed at 450 meters: 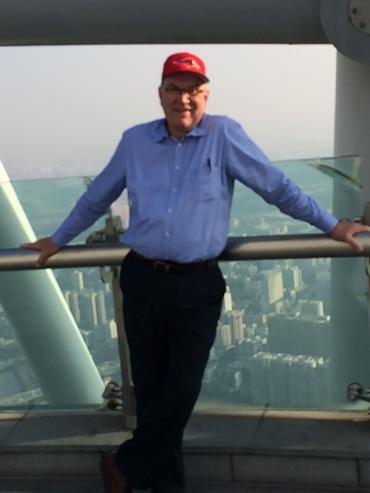 Here is the view of Guangzhou from the Canton Tower (a bit hazy due to the pollution).  Check out the tower's shadow! 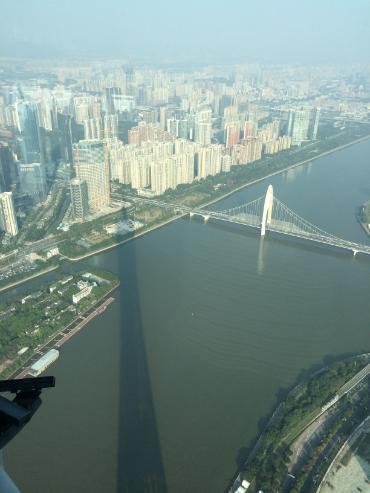 The next day we drove to Shenzhen to meet with SU alumni.  Shenzhen is an amazing place, with modern high rises and landscaped boulevards, all created in the last two or three decades.  It is perhaps the best illustration of how fast China has progressed as an economic power.  It is considered the "Silicon Valley" of China in light of its high-tech focus.  Check out this Shenzhen skyline: 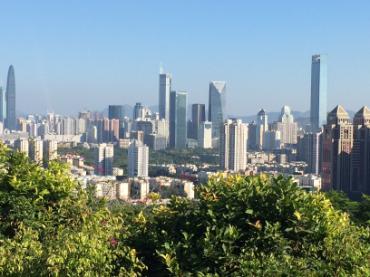 In the afternoon, we returned to Hong Kong, which is just a quick hour by car from Shenzhen.  We spent the next several days meeting with SU alumni who reside in Hong Kong.  Students have been coming to SU from Hong Kong since the 1960's, so the university has many alumni living in the territory.  The highlight of those visits was an alumni reception at the Dynasty Club on December 20th.  Over 30 alumni and friends were able to join us, including three current SU students who were back in town for the holidays.  Finance professor Jot Yau was also able to be there, as he was back in Hong Kong to visit his parents over the Christmas break.

The visits allowed me to thank our alumni for hosting students to company visits in September when Professors David Reid and Quan Le brought them here on a study tour.  I also warned them that another group of students would be back in September, 2017 under the guidance of Professors Ben Kim and Marc Cohen, and to please help out again! :}

One thing that caught my eye on this trip is how the Chinese are trying to weave Christmas into their consumer experience.  Everywhere we went there were secularized Christmas decorations and ornaments, even in the hotel rooms.  Of course, this is a complete commercial play, hoping to leave behind the Christian roots of Christmas, which they most likely will succeed with since even in the West the Christ frequently gets left out of Christmas.  We were told that something similar has been done with Halloween.  When the concept was first introduced in China, the Chinese did not like it because of the focus on frightening costumes.  As they learned costumes did not have to be frightening, they took to the holiday and marketers now consider the holiday to be a commercial success in the Chinese market.

The exploits of the Three SU Musketeers came to and end on December 22nd, as we made our way back to Seattle on schedule despite the Korean Airline pilot strike!  You have to hand it to Fr. Steve, as he is a real trooper, being able to combine the Middle East and China into a two-week trip.  We should all be so lucky to pull that off when we have that level of experience! Of course, Jim Hembree did the trip, too, but not as many miles on those tires!