Congratulations to Our Seniors!

Congratulations to all MRC graduates!

This spring, we recognize one graduating senior who has received a Fulbright Scholarship, which are given to conduct a year of research or teach English in a foreign country. We also recognize one senior who was considered as a semi-finalist for the award:

Congratulations to Anna Pickett, who will graduate in June with majors in Humanities for Leadership and Spanish. Anna received the prestigious Fulbright grant to Nicaragua to study disability rights in Nicaraguan Policy. During her time at Seattle University, Anna had the opportunity to visit Nicaragua multiple times. She has carried out research there and done an internship. She used her experiences and network of contacts to build a strong case for why she is the perfect researcher to investigate the gap between policy and implementation in Nicaragua about the rights of folks with disabilities. Nicaragua has a number of great laws in place, but few resources are assigned to implement them. Anna’s research will bring attention to this gap and support the efforts of organizations trying to make change happen. The Fulbright award is recognition of leadership, smarts, and cross-cultural competencies. Anna is a natural ambassador and will surely generate important data and conclusions about increased respect of the rights of people with disabilities in Nicaragua.

Congratulations to senior, Remington Purnell, who will be graduating with a degree in Humanities for Leadership and was a Fulbright semi-finalist. While studying for her Humanities in Leadership degree with a focus on International Politics, Remi developed an interest in linguistics, particularly northern European languages. Remi applied for an English Teaching Assistantship to Latvia. She is also planning to pursue graduate studies in Applied Linguistics, Language Preservation, or Natural Language Processing. The fact that she was semi-finalist indicates that the screening committee for Fulbright in the U.S. found her application to be very strong.

These students other students who have benefitted from the estate of Sue M. Naef. The Naef Scholarship provides support, financially and educationally, for undergraduate students of Seattle University who have shown exceptional intellectual skill and leadership potential. 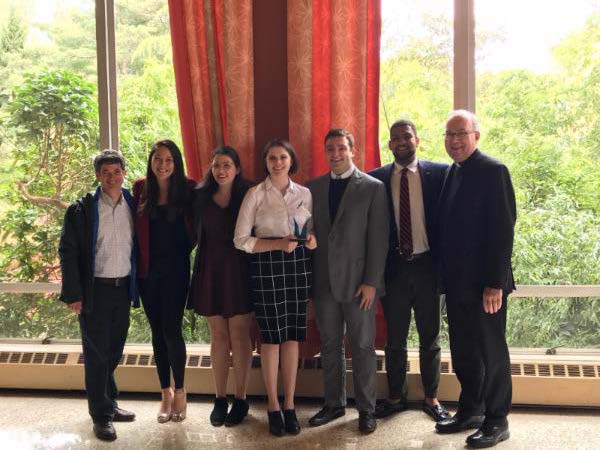 This past spring, the Seattle U Ethics Bowl team placed fourth in the 2017 Independent Colleges of Washington Competition! MRC students Jon Cantalini and Taneum Fotheringill are on the team, which is coached by Dr. Ben Howe.

This post was written by MRC 4th year student, Alita Campbell, for EKARI Foundation’s website while she was completing her international internship. In this article, she explores the dangers of voluntourism and the potential harmful impacts it has on developing countries.

The Dangers of Voluntourism

"The two main reasons people travel are for work or for pleasure, yet there are times those two intentions overlap. Having the opportunity to enjoy tourist activities when traveling for a work assignment is a blessing, but there are times in which this convergence of purposes actually creates harm in international communities, specifically when it involves volunteer work in developing countries..." 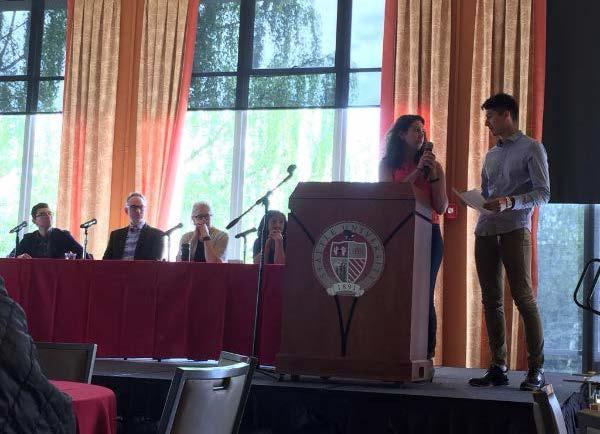 Students, faculty, and staff gathered in Campion Ballroom on May 8th to engage in discussion about the Humanities with five expert panelists. SAC representatives, April Rhodes and Nic Garcia, helped arrange the event, and the panelists were Andrew Gomez (University of Puget Sound), Rebecca Park-Hearn, Rosa Joshi, Daniel Washburn, and Serena Cosgrove.

This year we bid farewell to 3 exceptional members of the College. We wish them the best in their future endeavors.

Dr. Michael Matriotti received his Th.D. in Philosophy of Religion in 1984 from the Graduate Theological Union, Berkeley, California. Since 1997, Dr. Matriotti has taught numerous courses in the College and in the Philosophy Core, including courses in Poverty in America, Philosophy of the Person, and Sociocultural Transformations. An early adopter of service learning in the university, he co-led the College's education abroad program in France. He was appointed as Associate Dean of MRC in 2011 and served in that capacity until 2016. 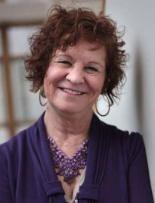 Professor Nancy Bush has been with the Matteo Ricci College for eleven years. She was the first Program Coordinator for the Bachelor of Arts in Humanities for Teaching degree. Previously, she earned her B.A. in Education from the University of Washington and taught in Seattle Public Schools for thirty years at Franklin High School. She is the co-author of the Washington State Recruiting Future Teachers curriculum. Professor Bush has taught the "Introduction to Tutoring" courses for the Matteo Ricci College.

Dr. Wilson Edward Reed received his Ph.D. in Political Science from Northern Arizona University. Since 1998, he has taught in Matteo Ricci College, the College of Arts and Sciences, and the University Core, including courses in Poverty in America and Police in Society. He is the author of The Politics of Community Policing: The Case of Seattle (Routledge, 1999). Dr. Reed has performed extensive professional service to the community and the university, most recently as a member of the search committee for the Seattle University Librarian.