Shannon Welles and the Movement to Save The Showbox 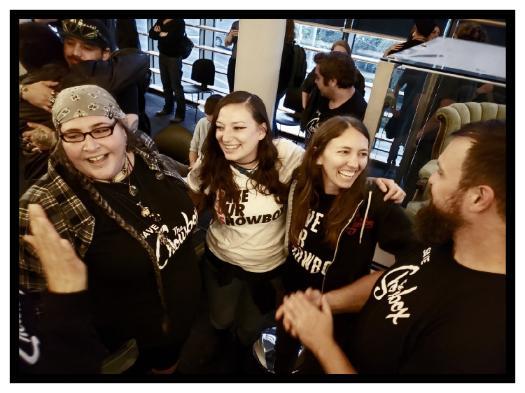 When the initial proposal to demolish The Showbox and convert the property into a luxury building was announced in the summer of 2018, Shannon Welles, MFA ’19, already had a role to play in saving the downtown Seattle music venue. Coincidentally, on that same day, Shannon had the MFA Public Policy in the Arts class, taught at the time by Arts Leadership faculty Kevin Hughes. In class, former City Councilmember Nick Licata presented as a guest speaker and the class broke into conversation around The Showbox sale. Moving forward, the emerging relationship between coursework and community organizing came to fruition for Shannon as she became the driving force behind Friends of the Showbox.

Shannon has been employed at the Showbox for the past 17 years. After various small-time gigs, including selling merch for bands at shows, she landed an office assistant position in the box office. Shannon became a House Manager 5 years ago and developed a role as a human resource to her fellow employees. “I call myself a camp counselor, because that’s what it feels like. I’m the person that people will come and talk to... I have that function as a middle manager, ” Shannon explains. Through the music, the people, and the building itself, Shannon has come to know The Showbox as important space for Seattle’s creative community.

After that critical Public Policy in the Arts class, Shannon had follow-up conversations with Nick Licata, who connected her to City Councilmember Lisa Herbold’s office for information on zoning laws. While Historic Seattle, Friends of Historic Belltown and Vanishing Seattle had submitted a landmarking proposal, Shannon had connected with the office of Kshama Sawant and the group began the ordinance process to add The Showbox to the Pike Place Market Historic District. Shannon’s public involvement became deeper as she continued to attend meetings and be a source of information for supporters of The Showbox on Facebook. 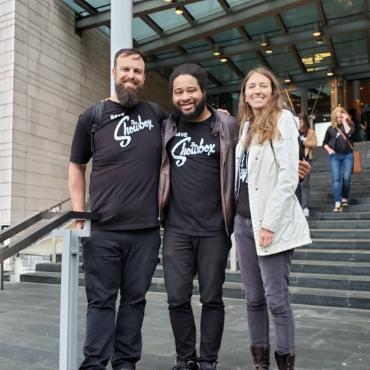 Through the remainder of the Public Policy and the Arts course, Shannon and her groupmates were able to use Kevin Hughes’ 14 points of advocacy to develop an advocacy plan based on The Showbox, “That really helped me as an intellectual exercise to figure out, ’who does have the power, and who are my allies? Where can I get help?’” From there, Shannon dedicated one of her Graduate Management Practicum courses to develop The Friends of The Showbox and the website.

Although her practicum course was over, Shannon’s time and effort on Friends of The Showbox did not. Shannon continued to form a network between city councilmembers and community leaders to prepare for a vote on The Showbox’s Historic Landmark designation. She steeped herself in landmarking policy and preservation law and the politics between elected leadership, civic organizations, and community stakeholders.

Arts leaders of all disciplines came together to amplify the cultural significance of The Showbox with the use of their mediums. Shannon speaks fondly of the Save The Showbox portrait series, created by Misha Dumont, a photographer, tattoo artist, and Showbox employee. This photo series included musicians, employees, radio DJs, and concert-goers of all walks of life; this powerful illustration amplified the cultural impact of The Showbox with old – and new – generations: 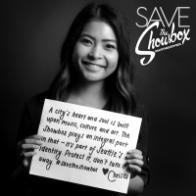 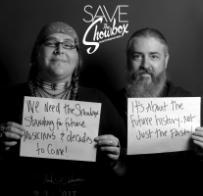 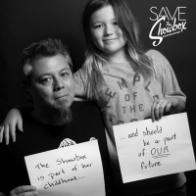 “When I look at the portraits, I feel like it's representative of a lot of people who actively use this space. Where I feel - Not everyone will show up for a city council meeting and stuff like that, or a landmark hearing. But that doesn't mean that these people don’t exist, or that younger people don't use this space… When I see who actively uses the space and who mainly, like the demographic that it's booked for, is a much younger audience. And they do care about space and they did show up. So to me, they're represented in the portraits.”

In July 2019, the Seattle Landmarks Board voted in favor of designating The Showbox as a historic landmark. But there’s much more work to be done, says Shannon: “We’re waiting for the city to negotiate controls with the owner. That will set up restrictions on the building itself.” She remains hopeful about the impact of this movement, however. “It’s getting [preservation groups] a different audience they didn’t have before, and it’s getting younger people involved in preservation policy in Seattle, which is what we need.” 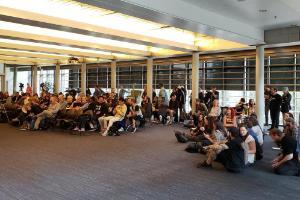 Pictured left: photo of the crowd at the landmark designation hearing in City Hall awaiting the vote results for The Showbox. Photo credit: Shannon Welles.

In reflecting on the experience, Shannon identified a few important factors to the success of the Landmark vote: establishing relationships with all community stakeholders through a common goal; persistent pressure by large groups on legislators, and calling upon allies and resources to navigate the political process. “With just numbers of people, and persistently showing up with huge numbers of people, it made a huge difference.”

Editor’s note: After this interview with Shannon took place, the owner of The Showbox property asked for an extension on the controls and incentives landmark process. The process will be revisited on December 18th. Meanwhile, Historic Seattle continues to work on their purchase offer for The Showbox.