The Latest in Film Studies

On campus and in the community

Film Major Ha’aheo Auwae-Dekker’s film, Malihini, (2020, 7 minutes) was accepted into the Hawai'i International Film Festival. The film looks into the director's relationship with Hawaiian identity and living on the mainland through a conversation with their mother. Tickets are on sale now online at the Hawai'i International Film Festival website and you can watch the film from November 4th - November 28th. 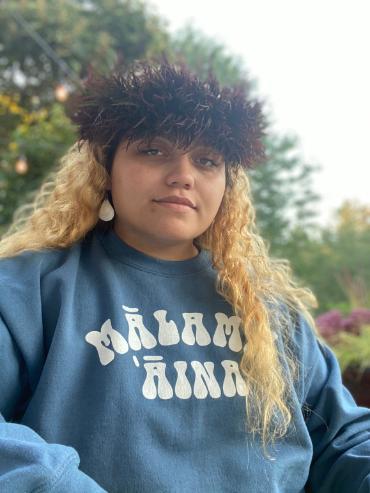 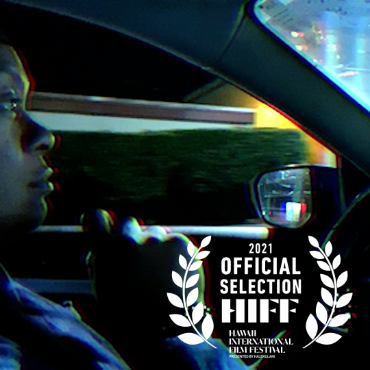 Dr. Kirsten Moana Thompson received the McLaren-Lambart Award Runner Up Award for Best Scholarly Book in Animation Studies from the Society for Animation Studies, and an Honorable Mention for Best Edited Collection from the British Association for Film, Television and Screen Studies (BAFTSS), for Animation and Advertising, eds Malcolm Cook and Kirsten Moana Thompson (Palgrave, 2020), Oct. 2021. 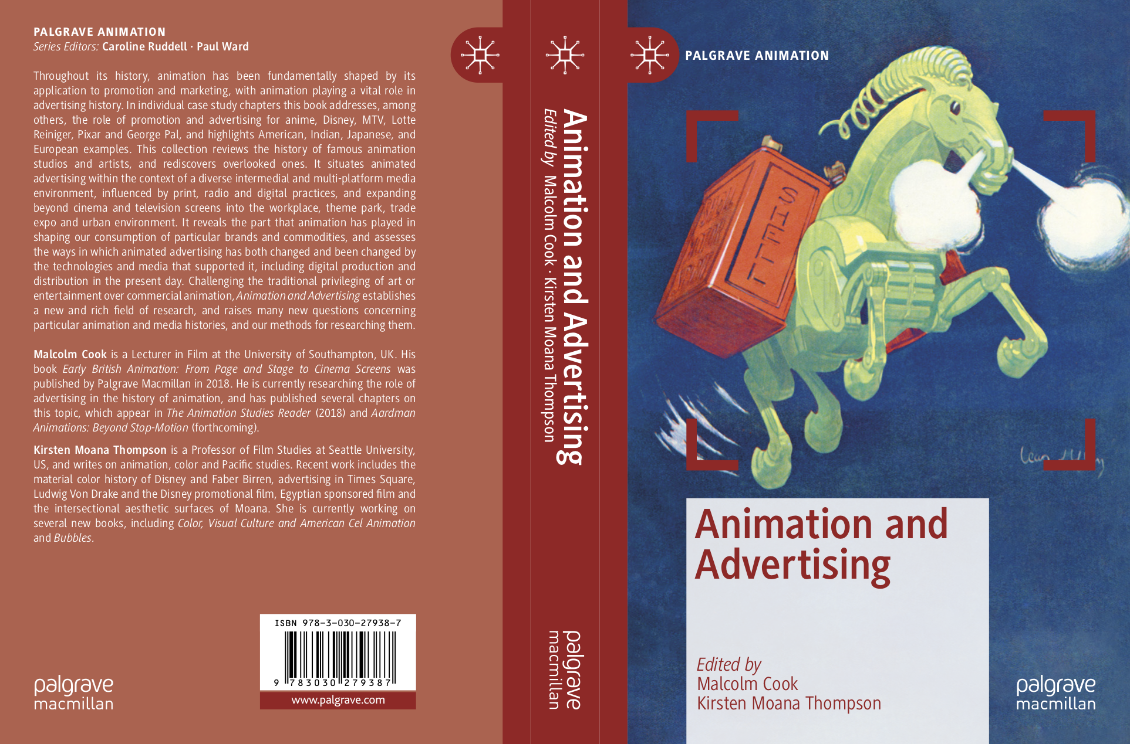 Dr. Thompson’s FILM 3220 Film Noir Class got some hands on practice this Fall Quarter with a demonstration of lighting equipment by Instructor Craig Downing. They then tried their hands to reproduce some of the beautiful chiaroscuro lighting they have been watching in American classics like Out of the Past (Jacques Tourneur, 1947) and The Maltese Falcon (John Huston, 1941). 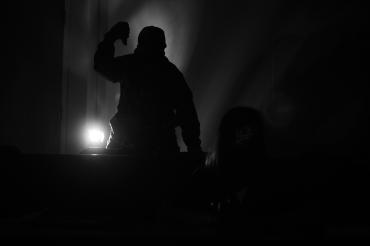 Celebrating their formation as an independent Film Program, the Film Faculty and staff went out together for a late summer sail, under the trusty captain Craig Downing and joined by John Trafton, Josefina Valenzuela Cerda, Program Director Kirsten Moana Thompson and Office Manager Shawn Bell. It was a beautiful day to celebrate! 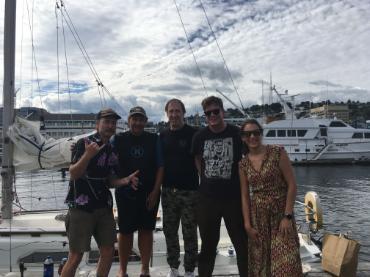 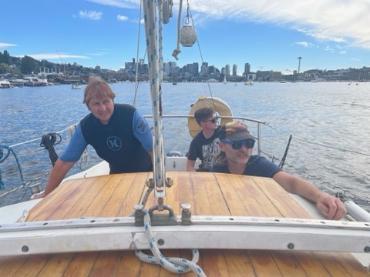 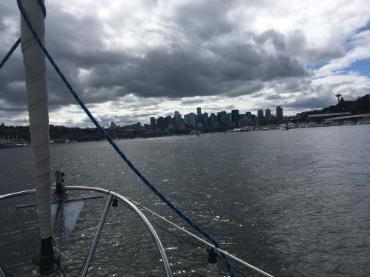 Film graduates Nils Gollersrud and Anthony Bowmer attended the Cannes Film Festival 2021 this year, where they checked out some of the new films, including Palme D’or Winner  and horror film Titane (Julia Ducournau, 2021), described by the BBC as the “most shocking film of 2021” as well as new films  by Apichatpong Weerasethakul (Memoria), Sean Baker (Red Rocket) and Hong Sang-Soo (In Front of your Face). They had a ball!

Film Major Ha’aheo Auwae-Dekker’s film, Malihini, (2021, 7 minutes) was accepted to the Local Sightings Film Festival. The director explores Hawaiian identity and their fraught relationship to the mainland in this intimate, raw conversation with their mother.

By mid-Winter 2020 COVID-19 struck and Film and Seattle U went mostly online, where we remain still. Film Festivals went fully virtual this year and our third partner, the Seattle International Film Festival was sadly cancelled. But we look forward to returning to Sundance in 2022 with juniors and seniors for our inaugural Seattle U student trip.

The Film Studies program was created in 2009 by the hard work of English Professor Dr. Edwin Weihe. Together with Dr. Sean McDowell, Dr. Weihe worked tirelessly for many years to grow the Film program, and we are so grateful for their pioneering work. Dr. Kirsten Thompson became the new director in 2016 and was joined two years later by Dr. Alex Johnston and Dr. Schultz-Figueroa who filled out the team with our colleagues, Justine Barda, Ben Stork, John Trafton, Craig Downing and Josefina Valenzuela-Cerda. The Film faculty recognizes with gratitude the hard work of all the faculty who have taught in the film program over the years, including award winning filmmaker Georg Koszulinski, Catherine Clepper, Bob Cumbow, Richie Meyers and many others. Over the last eleven years we have educated more than seven hundred majors and over 4300 students in film, University Core (UCOR) and crosslisted classes. Our students have gone on to graduate schools and to jobs in the film industry like HBO, Lifetime and A&E, working as directors, editors, film festival programmers, social media marketers and teachers. As Film leaves English and becomes an independent department in 2021, we look forward to our future with excitement. 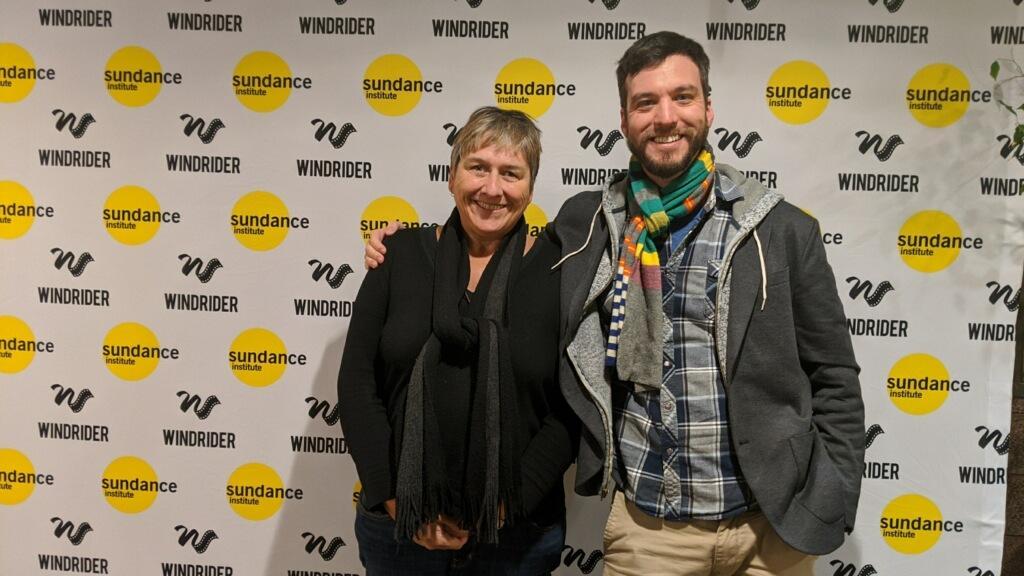 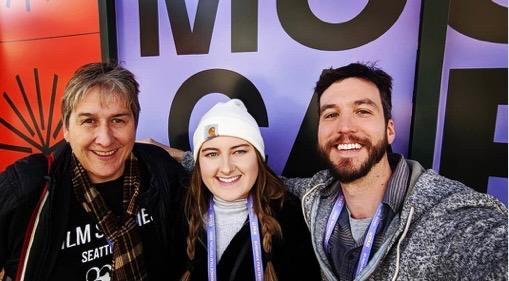 In January 2020 Dr. Thompson and Dr. Johnston went to Park City, Utah for the Sundance Film Festival as we laid the groundwork for a new annual student trip with official Sundance partner, the Windrider Film Festival. Amidst all the amazing new films and movie stars at Sundance, we also caught up with one of our recent star graduates Sydney Thun. Sydney has previously worked as a production assistant for Disney films and for television. She is now working as a Script Consultant for HBO!

Evidence of the Evidence: A Documentary by Dr. Johnston

Dr. Alex Johnston's film Evidence of the Evidence, which was previously selected for the prestigious Berlinale (Berlin International Film Festival), was also a finalist for two jury prizes in 2020: Best Documentary at the Mimesis Documentary Festival in Boulder, CO, and Best Experimental Film at the Dublin Independent Film Festival in Dublin, Ireland.

The Circle: A Narrative Experience by Josefina Valenzuela Cerda

Josefina Valenzuela Cerda's narrative experience The Circle is available on Oculus Go and was an official selection at the Sci-Fi & Fantasy: Genre Lab, and at the Los Angeles Lift-Off Film Festival.

Dr. Schultz-Figueroa also published two peer reviewed essays, "Mediating Disease: Scientific Transcriptions of Covid-19 into Animal Models" and "Abandoned Aquariums: Online Animal Attractions during Quarantine" while Dr. Johnston has a chapter in an upcoming book about the filmmaker William Greaves and his Muhammad Ali documentary, The Fight, and explores the parallels between the director's experiences as an African-American filmmaker, and Muhammad Ali's as a Civil Rights icon. Both Dr. John Trafton and Dr. Schultz-Figueroa announced that they had secured publishing contracts for their groundbreaking research. Dr. Trafton's Movie-Made Los Angeles: The City of Angels and the Rise of American Film will be with Wayne State Press. Dr. Schultz-Figueroa has just completed work on scientific non-theatrical films for The Celluloid Specimen: Moving Image Research into Animal Life and his book will be published in February 2022 by University of California Press. Dr. Thompson also published Animation and Advertising (co-edited with Malcolm Cook, Palgrave, 2019) the first anthology devoted to the fascinating world of sponsored animation. She was featured on the "Animation and Fantasy" Podcast, and also presented "Animated America: Animated Advertising from Times Square to Walt Disney" as part of Seattle University Lightning Research Talks. She chaired "Kanaka Maoli Childhood, Epistemologies, and Futurity" at the American Studies Conference in Honolulu, Hawaii, won a Summer Faculty fellowship for her work on animation and advertising, a Catholic course development grant and the Inaugural Seattle University Shine Award: Championing Student Professional Formation Service Award.

As part of Film's partnership with the Social Justice Film Festival, our students attended "Themes on Courage" panel screenings on campus in October 2019 and for this year's fully virtual festival, Dr. Thompson moderated the panel Transform: Another World is Possible, the Indigenous Futures Panel in October 2020.

For Tasveer Film Festival we hosted screenings on campus of Kaifinama (Sumantra Ghosal, 2019) and Reason (Anand Patwardhan, 2019) in September and Oct 2019.

Past News and Events

Good Kisser
Directed by: Wendy Jo Carlton
Hoping to add a little spice to their two-year romance, Seattleites Jenna and Kate open up their relationship to an alluring and enigmatic stranger, only for it to expose the cracks in their foundation.

Workshop SIFF May 28: How to Build an Online Following For Your Feature, Short or Episodic

Lynch: A History (documentary)
Directed by: David ShieldsA mesmerizing video collage rather than a traditional doc, this portrait of heroically controversial ex-Seahawk Marshawn Lynch focuses on his narrative-controlling interview strategies in the context of race and media celebrity in America.

Over the 2017-18 academic year and 2018, Michael  Lee and Brett Thompson were each interns at the Center for Environmental Justice and Sustainability. They created a video to tell the story of the amazing work Seattle U’s Center does to change the world and combat climate change.

After four years hard work  our largest graduating cohort got together to celebrate their new film degrees.

Six new Film prizes and Awards were given out.

Some of the Winners of the Graduation Ceremony 2019

The Tasveer South Asian Film Festival presents a very special evening with the two-time Academy Award-winning Pakistani director Sharmeen Obaid Chinoy. The program will consist of a screening of her Oscar-winning documentary, A Girl In The River, followed by a conversation with Sharmeen about her work as a documentary filmmaker. She will be receiving the prestigious Tasveer Emerald Award 2018.

Sharmeen Obaid Chinoy is the only female director to have been awarded two Academy Awards by the age of 37. Since 2001, she has made over two dozen multi-award films in over 16 countries around the world. Her films include Student-Athlete, Girl in the river, Song of Lahore, Saving Face, Peace Keepers, and Transgenders: Pakistan’s Open Secret.