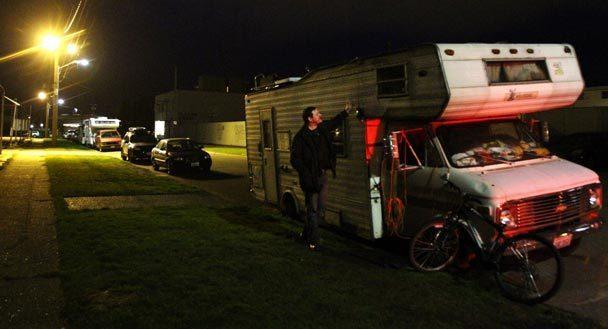 The Seattle Vehicle Residency Research Program (SVRRP) developed population and demographic data collection methods to improve their understanding of people who live in their cars. Through an alumna gift in 2012, Seattle University's Center for Strategic Communications began SVRRP and was led by research fellow, Graham Pruss. Graham worked with Seattle U students, volunteers, advocates, and local law enforcement and government to collect data about vehicle residents, and to gain insight into how to secure permanent housing for this underrepresented population.

The 2012 Vehicle Resident Advisory Report was published in September 2012 and presented to the Seattle City Council's Housing, Human Services, Health and Culture Committee, chaired by Councilmember Nick Licata. The SVRRP contributed to Seattle City Budget allocation of $65,000 for vehicle resident-specific programs in 2013.

The SVRRP continued in 2013, expanding to provide weekly instruction on the history of vehicle residency in the western world from an anthropologic and ethnoarchaeological perspective. The 2013 program offered research participants two different avenues of field research: the Population Count Project and the Demographics Project, and held weekly gatherings with community vehicle residents.

The Population Count Project teams collected data in neighborhoods throughout Seattle to compare with the previous two years of information. Students received field training to perform vehicle residence mapping within their study areas. The data was compiled at the end of the study and converted to geographic information systems (GIS) format for correlation with past and companion data sets.

The collected data revealed how public spaces are used as resources, the ways in which parking ordinances affect vehicle residency, and characteristics of areas with high vehicle residency, published in our yearly advisory report.

2013’s program introduced a Demographics Project that researched and developed techniques for collecting demographics on vehicle residents and other populations that use invisibility as a survival strategy.

What is vehicle residency and why are we studying it?

There are almost as many reasons for being homeless as there are people experiencing homelessness. People living unsheltered come from all areas of our society, but for many a singular item can be identified as their primary resource and home - their vehicle.  In Seattle, "sleeping overnight in a vehicle" (or vehicle residency) is the largest category of unsheltered people, comprising over 30% consistently since 2001. Yet, people living in vehicles often go under-assisted and present special challenges to local government, advocacy, faith communities and social service agencies that are eager to find ways to help. People living in their vehicles often have specific needs and utilize survival strategies which help explain their use of public space and resources.

Vehicle residents often do not define themselves as “homeless”; because of this, many do not access typical homeless services, such as overnight shelters. The reluctance to use typical homeless services poses a particular obstacle to collecting the population size and demographic data required for federal McKinney-Vento funding, in addition to direct outreach or assistance in service acquisition. The use of invisibility and camouflaging strategies often makes work difficult for agencies that report on national statistics for the Homeless Management Information System (HMIS) and the Annual Homeless Assessment Report to Congress (AHARC), both of which are used to determine national funding for services that address homelessness.

Because volunteers and outreach professionals may be unfamiliar with camouflaging strategies and can miss vehicle residencies during their yearly counts, there is a need for an easily trainable system to identify vehicles being used as homes.

Vehicle Residency in the News