(Jan. 7, 2015) An in-depth study by four Seattle University professors found costs related to pursuing the death penalty are about 1.4 to 1.5 times more than when a prosecutor does not seek death.

Combining all cost categories, the average cost of a death penalty case in Washington is $3.07 million, compared to $2.01 million (in 2010 dollars) for cases in which the prosecutor does not seek death. Adjusted to 2014 dollars, that difference is $1.15 million.

Those are among the conclusions of seven-month study "An Analysis of the Economic Costs of Seeking the Death Penalty in Washington State." The purpose of the study was to estimate the costs associated with pursuit of the death penalty, as compared to cases where the death penalty was not sought, for aggravated first-degree murder cases in Washington State. The study was limited to economic cost estimation only. It was developed to provide accurate estimates to inform debate and decision-making by policy makers and the public.

This is the most rigorous empirical study done on the costs of the death penalty in Washington, say the principal authors, Professor from Practice Robert Boruchowitz from the School of Law and Professor Peter Collins from the Criminal Justice Department.

"While there have been several studies of the costs of death penalty cases both nationally and in Washington, most have not addressed in detail the full spectrum of costs from the beginning of trial proceedings through incarceration and execution," the authors say. "This report provides documentation on the entire scope of economic costs, and details the more than $1 million difference when the death penalty is sought."

They and their co-investigators, Criminal Justice Professor Matt Hickman and Law School Adjunct Professor Mark Larranaga, examined 147 aggravated first-degree murder cases since 1997 and reviewed data from more than 40 different sources. The report documents the costs in the different parts of the criminal justice system and explains the complexity of capital cases that leads to increased costs. 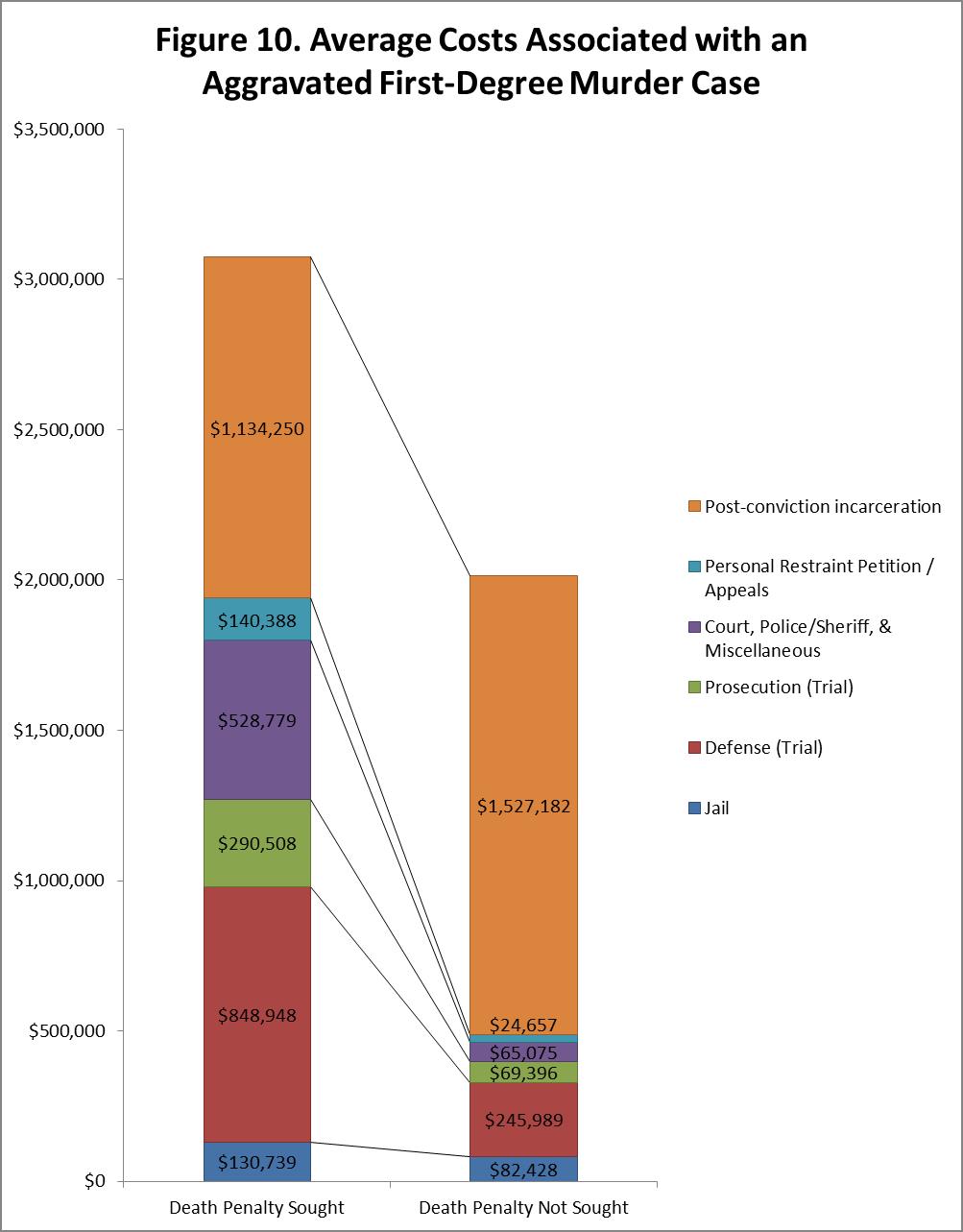 The team analyzed trial court reports of aggravated first-degree murder as well as Extraordinary Criminal Justice Act (ECJA) petitions in which local governments seek reimbursement from the state for costs in aggravated murder cases. They also reviewed data provided by the Washington Office of Public Defense, the Department of Corrections, the State Attorney General's office, prosecutors, public defenders, and a number of county governments.

The team used two methods to estimate costs: an all-inclusive method that used all of the eligible cases, and a more conservative approach that used a smaller sample of comparable cases selected using a technique known as Propensity Score Matching.

The report noted that the Washington Supreme Court has emphasized the need for defense counsel to be specially trained and certified, to be "learned in the law of capital punishment". The Court requires that when the death penalty is possible "At least two lawyers shall be appointed for the trial and also for the direct appeal." Developments in the case law have led to additional time and resources being required for capital cases.

The Court also has stated that "'[b]ecause the death penalty qualitatively differs from all other punishments, there must be reliability in the determination that death is the appropriate punishment.'"

The report reviewed the outcomes of 33 cases in which death sentences were imposed and either are pending appeal or the appeals have been concluded. Of 24 cases that have completed their appellate review, 18 cases resulted in either the conviction and/or the death sentence was reversed.

That means since 1981, 75 percent of death penalty cases that have completed their review have resulted in reversal compared to the 7.5 percent reversal rate of the 201 non-death penalty appeals. There are nine cases currently on appeal in either state or federal courts. There have been five executions.

The study was funded by a grant from the American Civil Liberties Union of Washington Foundation. The ACLU-WF had no role in conducting the research and did not influence the analysis and formulation of conclusions.