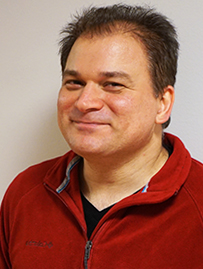 Mehmet Vurkaç joined the department in the fall of 2016. Dr. Vurkaç received his Ph.D. in Electrical and Computer Engineering in 2011 at Portland State University, Portland, OR. He completed his M.S. degree in ECE while working in industry and has a Bachelor of Arts in Mathematics–Physics from Whitman College, Walla Walla, WA.

Before joining SU, Dr. Vurkaç was an associate professor of Electrical Engineering and Renewable Energy at Oregon Institute of Technology where he taught 2010 through 2016. He has been teaching since 1994—continuously since 2005—in departments of electrical engineering, general education, and music.

Dr. Vurkaç is a member of the IEEE, the ASEE, the Society for Music Perception and Cognition (SMPC), the International Society for Bayesian Analysis (ISBA), the Society for Mathematics and Computation in Music (SMCM), the Percussive Arts Society (PAS), and the National Center for Women & Information Technology (NWCIT) Alliance. Dr. Vurkaç has been a reviewer for the Journal of Music, Technology, and Education, a reviewer and moderator for the ASEE Annual Conference and Expo, and a triage judge for the international Mathematical Contest in Modeling (MCM). He has been inducted into Mu Phi Epsilon, the international music honor society (1992), Eta Kappa Nu (electrical engineering, 1997), Phi Kappa Phi, the all-academic honor society (2003), and Tau Beta Pi, the all-engineering honor society (2003).

Prior to his academic career, Vurkaç worked as a hardware engineer in the music industry, at Rodgers Instruments, then a fully owned subsidiary of Roland Corporation, and has long been a semi-pro performer and recording artist.